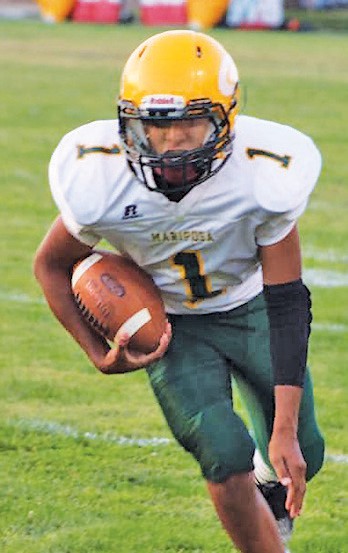 Angel Manuel Haro Villareal was found dead in a vineyard last week. He was loved by many in the Mariposa area. Angel is shown playing football for Mariposa County High School. Photo by Tammi Richards

Tragedy struck Mariposa County last week when a 15-year-old boy with ties to the area was found dead in a vineyard in Kern County.

According to Kern County Sheriff’s Office Lieutenant Joel Swanson, Angel Manuel Haro Villareal’s body was found by farmworkers in a vineyard in “the area of Wallace Road and Cecil Avenue in Delano” at around 8 a.m. on Thursday.

The farmworkers then alerted authorities to the body.

According to Swanson, “We arrived and located Villareal de- ceased inside the vineyard. He had traumatic injuries and we are working it as a homicide. At this point we don’t have any suspects.”

When asked if investigators had any inkling as to why the youth was there, Swanson said, “We are still investigating that.”

Anyone with information regarding the death should call the Kern County Sheriff’s Office at (661) 391-7500.

According to sources, Angel was a member of the Sierra Quest Academy group home in Mariposa and attended Mariposa County High School. Eventually, he left the academy and went back to the Central Valley, although it is unclear when that happened.

For many in the MCHS community, Angel was someone they came to care about. Many community members — including several MCHS students who knew Angel — took to social media over the weekend to express their sadness over the death.

MCHS assistant principal Tammi Richards said she wanted to go on the record and recount a conversation she had in the last few days.

“Someone said to me, ‘He was a group home kid wasn’t he?’ I told them ‘He was a Grizzly; the group home is where he lived when he was with us.’”

Angel was involved in athletics while he attended MCHS.

“We got a phone call Thursday night,” said Stein. “I got to know him personally. I got attached to him. I was sad when he left. I hoped he would make the right choices. My wife was in tears, because he was part of our life. We’re sad about this whole thing. Unfortunately, it’s kind of the nature in the lives of these kids.”

Stein said he became “especially attached to the group home kids because I sympathize” with their situation.

“Angel, like many other kids, I got attached to. I would bring him and some other kids over to the house and feed them lunch or dinner, and we’d watch football on a Sunday. We had a lot of good experiences,” Stein said.

Stein remembered Angel as a solid wide receiver and running back for the Grizzlies.

“He was a good athlete. He wasn’t big, but he was tough and pretty fast,” Stein said. “He would make me laugh because of the stuff he did.”

Angel was also a member of the MCHS track and field team for a brief period of time in 2019, competing in the 800 meter race, 4×400 relay and pole vault, according to records.

“It was such a short time,” said MCHS track coach Doug Johnson, who said Angel was only with the team for the start of the season. Johnson said he didn’t have much time to connect with him.

A GoFundMe page has been established to cover funeral and memorial expenses. That can be found by going to www.GoFundMe.com and searching “Angel Haro’s Funeral & Memorial.”

No other details about the incident were available at press time.