So far, so good 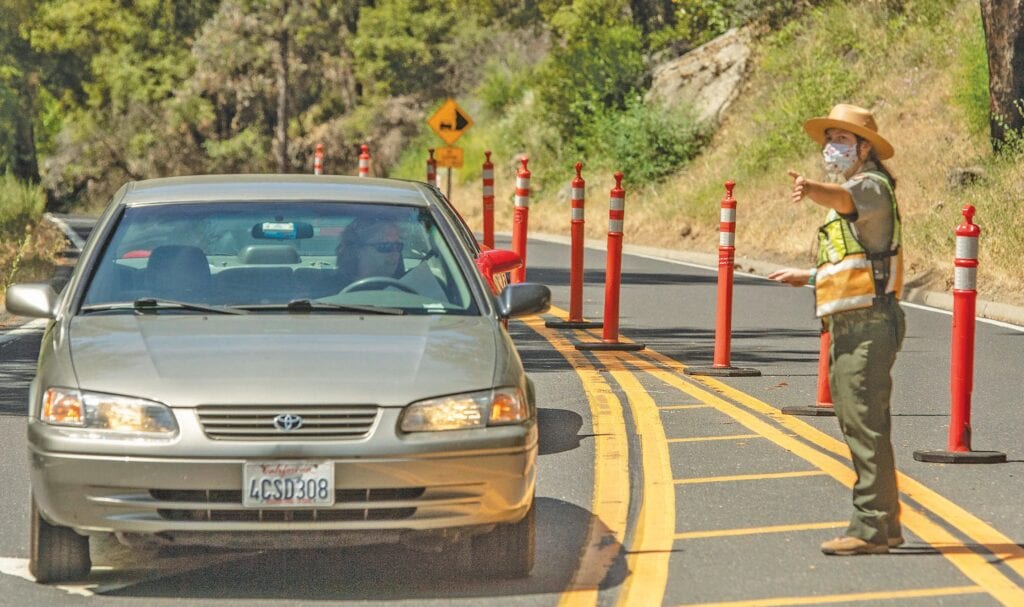 That was the word Monday from Yosemite National Park after it opened last week on a limited basis.

The park reopened last Thursday after being closed for three months because of the Covid-19 pandemic. But the reopening has created a different look for Yosemite during the height of the tourist season.

Park officials are limiting the number of vehicles allowed in the park as people have to purchase a pass to get inside.

“The visitors are being wonderful,” said Gediman. “Obviously, the word got out about the reservation system.”

Gediman said fewer than 10 people had to be turned away because they did not have the required pass to get inside.

He reported that at the entrance stations, the public was “cooperative,” and said people in Yosemite Valley have “been really good.”

The reopening of the park came following a lot of discussions and meetings which included officials from Mariposa County, including Dr. Eric Sergienko, the county health officer.

“We’re so appreciative of the county,” said Gediman. “Dr. Sergienko has been wonderful. That laid the groundwork for so much. We did all of the planning and I feel it is paying dividends right now.”

He said the opening was a “regional effort” with various agencies from all the counties around the park giving input.

“From a public health perspective, everybody has been real supportive,” said Gediman. “I feel that the regional approach has really helped with the success of our initial launch.”

The opening of the park with limited visitation has drawn the ire of some, including those who think park officials are not letting enough people in to those who believe too many people are being drawn to this area in the midst of a pandemic.

“To me, I think it is a wonderful balance,” said Gediman.

Gediman said he was “out a bit” on Monday and said the visitors “are doing whey they are always doing.”

That includes visiting the waterfalls, fishing at the river and many other activities. He called it “back to normal,” at least the new normal of limited visitation.

“People are not crowding,” said Gediman.

With fewer people, Gediman said there are a lot less visitors at spots like Tunnel View and Yosemite Falls.

Gediman said park officials are closely monitoring the situation and in the coming days, they will be “coming up” with reports based on observations. That can include the number of people at certain locations and much more, he said.

From the perspective of park officials, Gediman said the normal “challenges” faced at Yosemite are not happening this year. Those include parking woes, traffic jams, overcrowding at sites and more.

For example, Gediman said the popular Mist Trail is now one-way and people are complying. “That seems to be going well,” he said.

Gediman said this past Saturday, like most weekends, “was busier, but again, manageable.”

He said some of the concerns before the opening, like parking and having no valley shuttle buses, seem to be working out. Gediman also said without long lines at many of the attractions, it seems to be working, including people finding places to park.

“For now, it is working real well,” said Gediman.

He said officials are discussing the current program which allows a certain number of people in the park and whether to adjust that number, but “no decisions” have been made.

“We’re not even a week into it, but this is exactly what we had hoped to accomplish,” said Gediman. “We’ve established a reasonable number and we know what to expect. It has been nice.”

It hasn’t hurt the weather has been nice, he said.

“The weather has been wonderful. The park looks great. The meadows are green. The waterfalls …,” he said.

One issue that arose prior to the opening of the park was just how many more animals were being seen by those living at the park as well as the various delivery people who kept the park supplied.

“I haven’t seen a huge change,” said Gediman. “Bears are active, but they are always active this time of year.”

Gediman said, like always, “the animals are adaptable. They were adaptable before and now there are more people. The bears are out and they are hungry.”

Keep on keeping on

“We want to provide the most diverse, complete experience possible,” said Gediman.

In doing that, Gediman said he feels good about the fact so much has opened in Yosemite as compared to other national parks around the country.

Gediman also said the pass system has worked well so far. Anyone wanting a pass can do so online and Gediman said people “can get pases fairly readily.”

There are likely many factors involved in that, including there are no foreign travelers coming to Yosemite as well as the fact many people in California — and across the country — are limiting travel.

All of that does have an impact on one group of people and that is those who live in the park. Those include park workers, concessionaire workers, spouses of workers and more.

“Everyone is feeling good,” said Gediman. “There was certainly some apprehension, but so far, everyone is good.”

Gediman said having the reservation system means “there are less people here” and the local people, too, are “not seeing the crowding. Not only is it a calmer environment, but people are saying it is nice because the visitors are acting responsibly.”

Over the past week or so, many areas of the park have reopened as they normally do this time of year. That includes Glacier Point, Tioga Road and Hetch Hetchy.

One place that also opened is the Mariposa Grove of Giant Sequoias, which underwent a major reconstruction two years ago and is one of the most popular spots in Yosemite.

But this year, the shuttle system to the grove is not operating and that means visitors have to take a long hike up the road just to get to the grove. Then, there is a long walk inside the grove and the return trip.

People who have a handicapped plaque on their car can drive to the grove area, but nobody else, said Gediman.

Gediman said he does have concerns about people having to walk that far to see the Mariposa Grove, but for this year, that is the program which is in place.

One response to “Yosemite reopens to tourists, officials pleased with program”