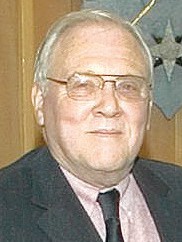 His sister, Pat, and brother, Lyle, preceded him in death.

Dick was raised in Bell and met his wife Elaine of 61 years at Bell High School.

While in high school they started dating when he was 17 and she was 15. They married in 1959 while he was going to college at USC, graduating with a degree in Business Administration.

Son Richard was born in 1961, a week after Dick started Law School at USC, working days and going to school at night. During his third year, son Robert was born.

He received his law degree and went to work for the Los Angeles County Council for 26 years, retiring at the age of 50. After retiring, Dick and Elaine moved to their dream home in Mariposa.

Dick started a small law practice at his home and worked part time for the Merced County Council. In 1988, their two oldest granddaughters, Heather, 4, and Jennifer, 2, came to live with them. It was soon after the girls came he was offered a full time job with Merced County and took it, working there 16 years.

When there was a opening for Superior Court judge in Mariposa he ran for the judgeship and won. His term started in 2002. He retired at 75 years old after serving two terms. He loved being a judge; it was the best job he ever had.

Hunting was his fun thing. Dick loved going to Idaho and Wyoming. The family ate what he brought home. It was interesting.

Dick loved the Lord, he became a Christian when he was 24. Working for the Lord was important to him. He and Elaine were youth sponsors for college kids, they always tried to out smart him and couldn’t do it. He’s been a teacher, deacon and elder. He was an elder at the Ponderosa Basin Chapel when he became ill after surgery.

We all loved him and he will be truly missed.

A Celebration of Life service will be Aug. 30 at 5 p.m. outside across the street from the Ponderosa Basin Chapel at the volleyball court. Chairs will be available to sit where you want — bring your mask. Dress casual and a casual dinner will be provided. Let’s celebrate Dick’s life.