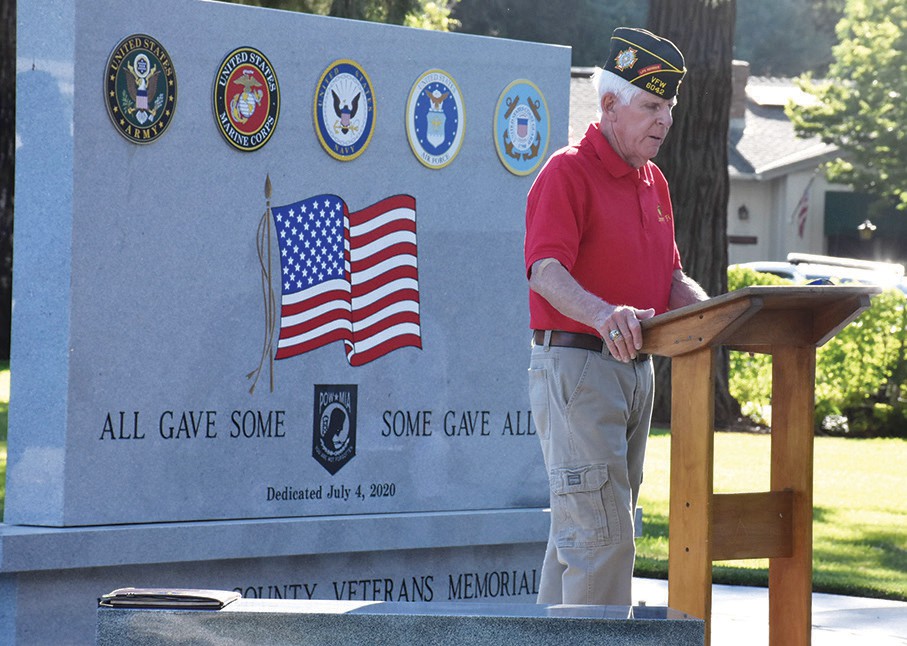 Shown above is Bill Yaley, chairman of the Veterans Memorial Committee, speaking at the memorial last year when an unofficial ceremony was held with limited attendance because of the pandemic. On Nov. 13, the community is invited to the formal dedication as well as a free lunch on the grounds of the courthouse in Mariposa

But on paper, nobody could foresee the Covid-19 pandemic and what it would do to what otherwise would seem to be simple events.

Such is the case with the Mariposa County Veterans Memorial located at the courthouse in Mariposa. The memorial has been in place for going on two years now. It took two years before that to make it happen.

And now, the community can come to a formal dedication ceremony and free lunch set for Saturday, Nov. 13 — two days after Veterans Day.

The event will be held from 11 a.m. to 1 p.m. on the grounds at the courthouse. There will be tents erected on the courthouse grounds with seating for all who attend.

“I think it is great for the community,” said Bill Yaley, who has been chairman of the memorial committee since its inception nearly four years ago.

The ceremony will feature a short program to dedicate the monument. Yaley, a Vietnam veteran, will introduce the program and local pastor and veteran Chuck Kendall will offer the blessing.

Mariposa County Supervisor Wayne Forsythe will deliver remarks, there will be a rifle salute and then taps.

Then the community will be able to eat a free lunch thanks to donations as well as work by the Mariposa Yosemite Rotary Club and the Lions Club of Mariposa.

Yaley said everyone is invited to come to the dedication and luncheon, noting it was the community which made the memorial possible.

“It was truly a community effort,” said Yaley. “And it was a real cross-section of people who helped out.”

The list of those who contributed to the project is lengthy and includes donations both large and small. Yaley said all have been appreciated by the committee.

He said the memorial is “100 percent paid for by donations,” as is the luncheon on Nov. 13.

For Yaley, the story began nearly four years ago when he was talking to some local veterans and they wondered aloud why Mariposa County had never erected a memorial to veterans.

“It is something that should have been done years ago and I don’t know why it wasn’t,” said Yaley.

He stressed the memorial is dedicated to veterans who gave their lives in the ultimate sacrifice to America, to veterans who are currently serving and to those who will serve in the future .

That, said Yaley, is one of the driving forces behind doing the memorial in the first place.

He said generations well into the future will be able to see the memorial on the grounds of the historic courthouse.

Yaley said since it was put into place, many people have had positive comments and appreciate the effort that went into the memorial.

“Everybody who I know has seen it really likes it,” said Yaley.

The memorial gets regular visitors, from tourists to local people who sit and have lunch and others who may meditate while at the monument.

Many veterans visit it, as well.

“They do visit it,” said Yaley.

Yaley also gave credit to county officials, saying everyone has been cooperative since the beginning.

“The county has been extremely cooperative,” said Yaley. “We have had the full support of the board of supervisors and all of the county offices have been extremely helpful and positive.”

He also believes the vast majority of the community is supportive of having the memorial there as a reminder to the many veterans who have fought for the freedom Americans enjoy as well as those who serve now and others who will be serving.

“There was nobody who objected to it,” said Yaley.

In fact, he said everyone has been positive and believes it adds another element to Mariposa County.

“It has been a real positive for the county,” said Yaley.

One response to “Veterans Memorial to be dedicated, community invited to free luncheon”