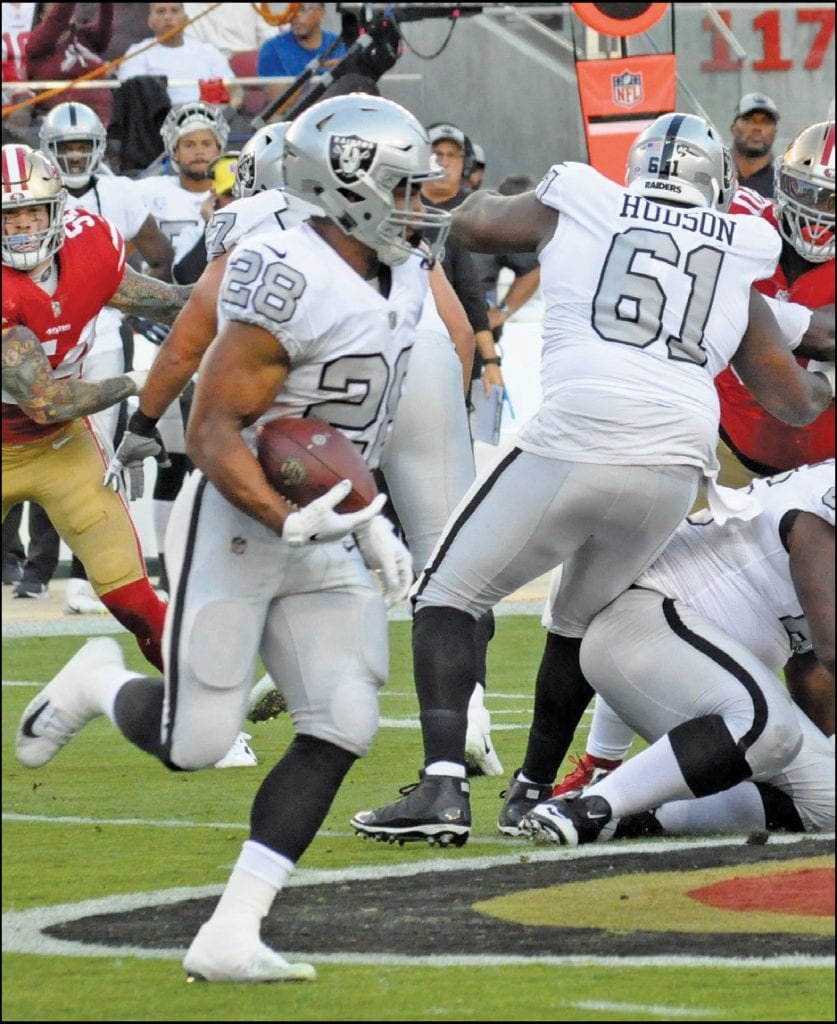 An uncertain future awaits running back Doug Martin (28) and the Raiders heading into 2019. Photo by John Mabon

If last week Monday’s 27-14 drubbing of the Denver Broncos was the last game in Oakland for the Raiders, it was a memorable way to go out.

From the beginning of the game, with a sensational punt return for a touchdown, to the end of the game, when the Raider defense came up big with second half interceptions, it was a game Raider fans will try to hold onto forever.

They might have to hold on to those feelings for a long time, because it looks like any memories the Raiders give their fanbase moving forward will be made in anywhere but Oakland.

There is still a chance the Raiders could be back in Oakland in 2019, though the city is suing the team and the team withdrew its lease application with the Coliseum.

Next season — before the Raiders will move to Las Vegas permanently in 2020 — rumor has it the team could end up in San Francisco’s AT&T Park or even at Levi’s Stadium in Santa Clara. Other rumors have the Raiders playing in San Diego because San Diego no longer has an NFL team in the aftermath of the Chargers leaving. 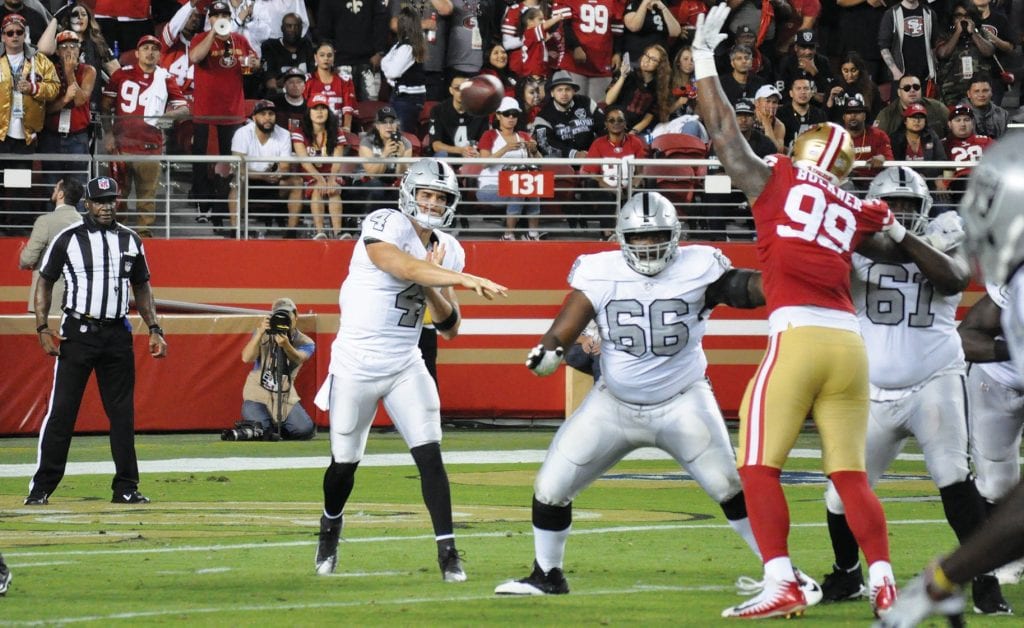 Raiders quarterback Derek Carr (4) throws a pass against the San Francisco 49ers during the 2018 season. The Raiders will play in Las Vegas beginning in 2020 but don’t have a home site selected for the 2019 season. There are rumors the team could relocate to San Francisco for a year, or possibly even San Diego or Fresno. Right now, no one seems to be sure. Many Raider fans are disappointed in the situation. Photo by John Mabon

Raider quarterback Derek Carr even suggested the Raiders should play in Fresno, where Carr starred at Fresno State University during his college playing days.

Along with head coach Jon Gruden, Carr is the face of the Raiders at this point, and his love for the franchise that drafted him was evident after the win over Denver. He made his way around the entire stadium, slapping hands with the fans in the stands.

“Raider Nation, I love you,” he was reported as saying after the game. “My family loves you. You guys are the most loyal fans in the world. I know it hurts that we might not be the Oakland Raiders forever, but we are still Raider Nation.”

Certainly, the Raider fanbase is one of the most loyal in the league. The fans in Oakland had to endure a prior departure by the Raiders, when the team moved to Los Angeles in the 80s before finally coming back to Oakland in the 90s. And those fans — although stung — stayed loyal to the team.

When you think Oakland, you think Raiders. It’s a match that is meant to be. If the Raiders are the body, Oakland is the body’s soul.

And there’s something unique about the Silver and Black. Oakland is the franchise with a giant chip on its shoulder. It’s the team that’s the bad boy assassin of the NFL. There is simply no team quite like the Raiders. Being a fan means being part of a brotherhood, or a fraternity.

“It’s such an honor to be a Raider fan,” said Catheys Valley resident Brett Baumann, who has had season tickets to the Raiders off-and-on since 2003. “We’re just going to wait and see. We’re ready to follow them no matter where they go.”

Baumann was in attendance with his family at Monday’s game. He called it an “emotional feeling.”

“When we first got there, just walking around the stadium, we were really taking it in,” Baumann said. “We did a complete circle around the stadium. We were reminiscing about the great family memories we had. As the game started and the initial punt return — that was off the charts — and so everybody really perked up. … We reminisced with many of the fans I’ve sat with for years. Everybody was talking about what is going to happen next year. The mood was fantastic as the game progressed. It was really a special thing. We stayed until the end.”

Other fans, such as John Mabon of Mariposa, weren’t feeling the love quite as much.

“They’ve left so many times, I’m done,” said Mabon. “How many times can you screw over your fans?”

Greeley Hill’s Al Golub, who has commuted all the way from Mariposa County for years to photograph the Raiders for the Stockton Record and other newspapers, wasn’t angry as much as he was disappointed.

“My opinion is that the team already left once before. Good riddance. It’s over,” said Golub. “If they want to go, then go. The Raiders have been crying wolf that they’re going to leave. So let them go.”

If the Raiders aren’t in Oakland next season, it just won’t feel right. The Raiders will be a body without a soul.

In a ‘pickle’Senior Showcase: Logan ‘Blur’ DonatiGrizzly Sports Stars to still be honored by the Gazette soon