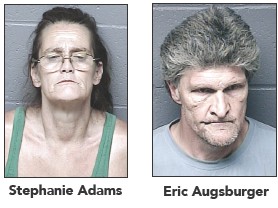 Two local residents have been charged with involuntary manslaughter in connection with the death of an elderly man.

The victim was Wayne Franklin Adams, 74.

Ann Adams also faces a charge of theft from elder or dependent adult by a caretaker.

Both were arrested on July 26 and remain in the Mariposa County Jail. The two appeared in court last week where Mariposa County Superior Court Judge Michael Fagalde set the next hearing. He set the preliminary hearing for 1:30 p.m., on Sept. 17. Adams remains in jail under $500,000 bond while Augsburger’s bond is $300,000.

According to the Mariposa County District Attorney’s Office, the theft charges stem from allegations Adams, who was the step-daughter of the man who died, cashed his VA checks and Social Security checks. An exact dollar amount was not known, though it was for thousands of dollars.

Wayne Adams was taken by ambulance to John C. Fremont Hospital before being taken to a regional hospital, where he died the next day. He was found by investigators in his bed and was then transported.

“This was a disturbing case and one of the worst I have seen,” said Mariposa County Sheriff Doug Binnewies.

The maximum penalty for Adams is 12 years in prison. Eleven of those years are related to the first two counts and the third is from the alleged theft.

For Augsburger, the maximum sentence is 11 years.

Mariposa County District Attorney Walter Wall said no plea agreements will be offered in the case.

Wall emphasized to area residents the importance of checking on elderly relatives and neighbors. He said people need to check on them and if they feel anything is suspicious, contact law enforcement officials.