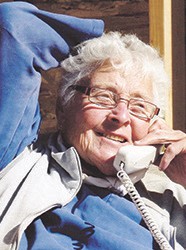 Longtime Mariposa County resident and builder, Tre Ford, died peacefully at her home in Midpines on March 8, 2021. She was 92.

Tre was born in Oklahoma on Aug. 16, 1928. She spent her early years in Denton, Texas, and eventually moved to California while in her 20s. She was a graduate of California State University Chico and a member of MENSA, a high IQ society.

Tre worked as a teacher for 15 years, much of the time in Cupertino, Calif. While there she was named “Teacher of the Year.” She was an adventurous teacher, once taking the entire third grade to Hawaii. During her school breaks, Tre loved to golf in Ireland.

Tre’s natural curiosity led her to a number of jobs and professions including as an inspector at a bomb factory for the Chemical Warfare Service, as a medical transcriber, a sandal maker and a lumberyard worker. Tre was always an adventurer, one time riding her bicycle from New York City to Dallas, Texas. She also acquired a certified pilot’s license and flew her own plane.

Tre retired from teaching to start a construction company. Tre and Lee Gallagher founded the Tre-Lee Construction Company in Midpines. For the next 40 years, Tre and her company built scores of wonderful homes and public buildings including the Midpines Fire Department, Mariposa Library addition, the SPCA Building and Tink’s Little Acre (now 1850 restaurant).

Tre mentored men in the community in the construction business, including Kyle Lindquist and Doug Chappel.

The Tre-Lee company of all women builders was featured in People Magazine on Oct. 1, 1984. In that article Tre was quoted as saying, “We are a springboard for some and an ultimate career for others. I’m not competing with men. It’s just that if a woman feels like doing something like building, she should be able to do it.” Tre inspired many women to create businesses of their own and to build their own homes.

In her bonus years, age 75-85, she joined her life partner, Susan Lohwasser, in the construction and photography business. She was the navigator on their many helicopter flights and during the years she assisted in photographing in construction in over 16 states.

Tre was a founding member of an active and supportive book group that included meetings in her home when she could no longer travel.

Tre is survived by her partner, Susan Lohwasser, and many loving friends and neighbors.