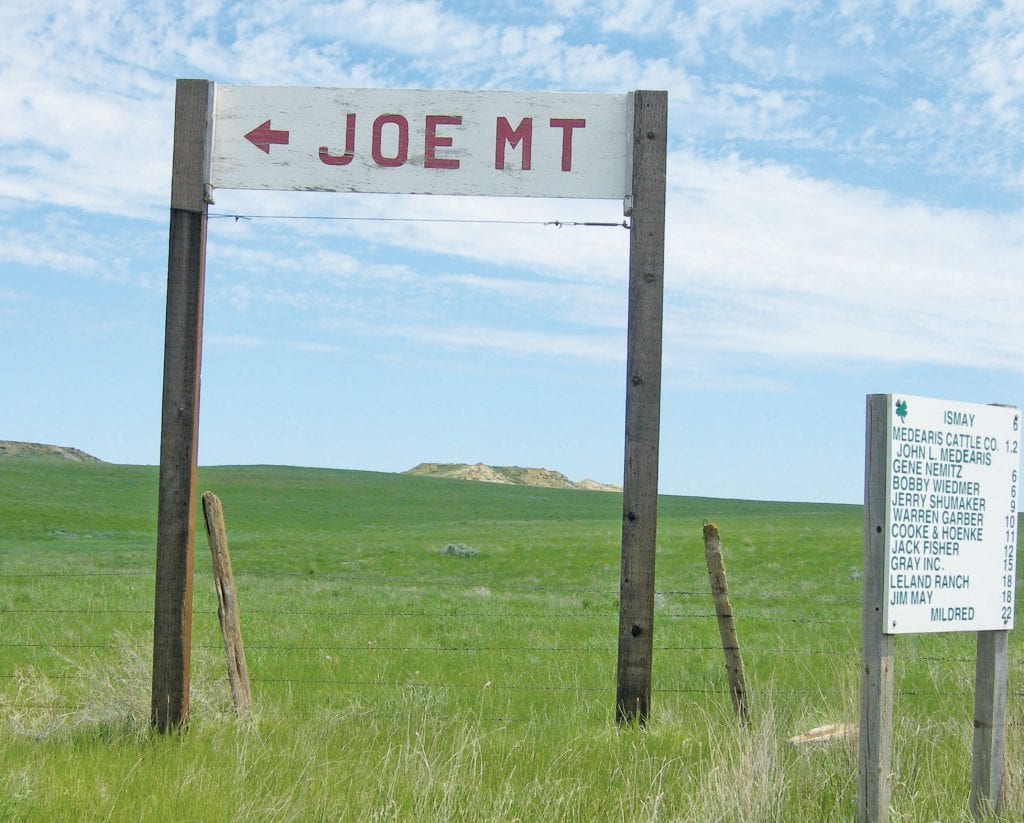 Shown is an old sign for Joe, Montana. The town of Ismay, Montana changed its name to match the name of tremendous quarterback Joe Montana years ago. Photo courtesy of Jimmy S Emerson, DVM

With the recent success of the San Francisco 49ers and even the Oakland Raiders (who, despite a losing record have performed better than some expected this season), football fans in Mariposa County are as fired up as they have been in years.

Montana, of course, was the great quarterback who piloted the team to four Super Bowl titles in the 1980s. He is considered one of, if not the greatest quarterback to ever play in the National Football League.

Montana retired following the 1994 season, but a few years before his retirement, Ismay, a small town of fewer than 30 people in Montana, named itself after… Joe Montana himself.

“It has been quite a few years,” said Rita Nemitz, who might as well be the official matriarch of Ismay.

Rita and her husband, Gene Nemitz, own the grain elevators in the town. 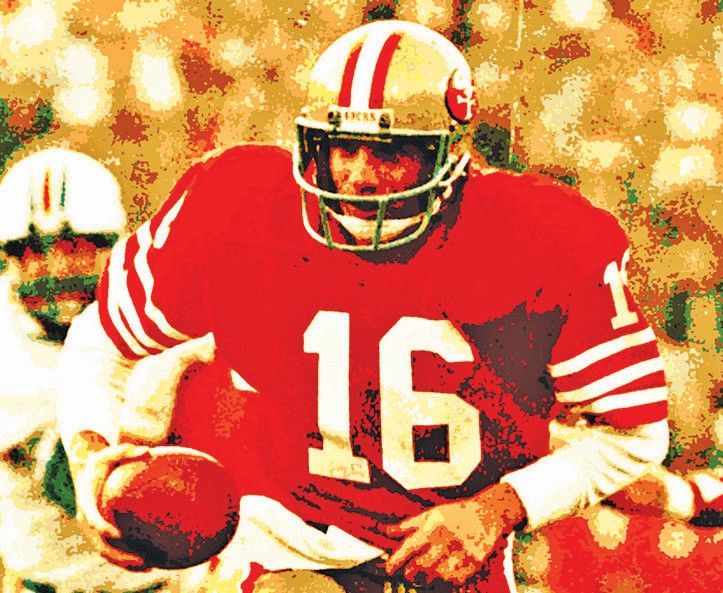 Through a phone interview, the Nemitz family shared some of their memories about the town changing its name.

A tiny slice of America

Ismay sits just a few miles off of U.S. Highway 12 in the desolate plains of eastern Montana, just miles from the North Dakota border.

It’s so small, that if you were to blink as you drove by Ismay, you might miss it.

But it’s home for the 20-or-so people who live there now. The town has actually shrunk a bit since the 90s.

“I think all the people are good and neighborly,” Gene said. “There is not much happening in Ismay. You pretty much have to go elsewhere.”

There is, however, one thing in town: a community center/fire hall — which seems like a big thing for a town so small.

Joe Montana and the San Francisco 49ers are going through one of the messiest divorces in sports history.

The newspapers covered it in depth. Each day it was, will Montana stay or go? Should he be replaced by upcoming quarterback Steve Young?

In a last ditch effort to keep the legend with the franchise, team officials offer Montana the starting job.

But Montana’s pride has been hurt. He requests to be traded to Kansas City, a team he feels will match his playing style and provide a chance to make a run at the Super Bowl.

Montana’s trade to Kansas City creates pandemonium among the Chiefs fans, who now believe they have the quarterback to take them to the promised land.

In the midst of all that fervor, a Kansas City radio station decided to stage an off-the-wall publicity stunt. A representative from the radio station called the town clerk of Ismay one day with a strange request: would the town be willing to change its name to Joe, Montana?

“It was more of a publicity stunt,” Gene said. “They were looking for something to make the radio station stand out a bit. I think they’re known for off-the-wall stuff. They called out of the blue one day.”

“Bearcreek, Montana was offered first. They declined,” Gene said. “We came to find out they had more population than we do (and may have been reluctant to make a big change).”

The town members hastily called a meeting and discussed whether to take the radio station up on its suggestion.

“It was spur of the moment. We called a meeting and decided we would do it,” Gene said. “I just couldn’t believe that anyone would really take hold and run with this thing and think it was (beneficial).”

It took a bit of time, but the name change from Ismay to Joe drew national media attention. The famous athletics magazine Sports Illustrated mentioned the name change, and even newspapers from other countries were running pieces about it.

“At the time it was happening, we did a lot of interviews from people all over,” said Gene. “I think the one (interview) that sticks in my mind is Jack Youngblood, he played for the L.A. Rams, he had a radio talk show. As a little kid, I looked up to him and just had to watch him.”

Gene said if his memory is correct, Sports Illustrated has been to the town three times over the years to highlight the name change. In fact, the town was slated to appear on the front cover of the July 1993 issue until it was bumped out by a different story.

“We were going to be the front page, but somebody in baseball did something extraordinary, so we got moved to the table of contents,” Gene said. “But that made us credible. That’s when the snowball started moving.”

“Every once in a while we still get people calling,” Rita added.

Even today, its impacts are lasting.

If one goes to Ebay.com today and types in “Ismay, Montana,” a number of memorabilia pieces are for sale, including postcards and envelopes featuring the legendary quarterback’s likeness.

Show me the money

One of the reasons the town’s citizens wanted to change the name was to raise money for important services.

They had the foresight to know that changing the name could lead to more attention, more tourists and more money.

“At that point in time, we wanted to raise enough money to fix the fire truck up. Californians obviously know how important it is to have firefighting services around,” Gene said.

There were also hopes of constructing a community center.

“A community center came a little bit later. It kind of started snowballing. The dreams got a little bigger,” Gene said.

Eventually, both goals were met. And it was thanks to the memorabilia the town sold like hotcakes.

“I remember the first 500 T-shirts we ordered. I was pretty sure we’d be wearing Joe Montana shirts for the rest of our lives,” Gene said.

The town even held “Joe Montana Days,” a festival, for close to a decade. It was held each year on Fourth of July weekend, Gene said.

“All the funds came from the Joe Montana thing,” Gene said. “There were a lot of things that happened.”

“That came from selling T-shirts, caps and envelopes,” Rita added.

Meeting the legend himself

Naturally, one might wonder: what did Joe Montana think of all of this?

“We got to meet him in Kansas City when we went down there,” Gene said. “The radio station flew 21 of us out. We got to meet Joe at Arrowhead Stadium. He was a personable guy and was nice. I don’t know if he knew what to expect. He might have been expecting a bunch of crazed football fans. I don’t know if we talked any football with him. We talked family and different things. We talked about Ismay. I think he enjoyed his time with us.”

Montana went on to produce two successful seasons for the Chiefs, despite being in the twilight of his career. In 1993 he threw 13 touchdowns to 7 interceptions, and led the Chiefs to the postseason.

He tossed 16 touchdowns and 9 interceptions in 1994 and also claimed a postseason berth. Certainly his numbers weren’t eye-popping stats, but he gave the Chiefs a new element to their offense, and produced some memorable performances, including a thrilling Monday Night Football victory over John Elway of the Denver Broncos.

“Everybody kind of has their own team, but for a while there we became hardcore Chiefs fans,” Gene said.

Montana would finish out his illustrious career with the Chiefs before announcing his retirement. He is now a member of the Pro Football Hall of Fame.

Although it’s been several years since all of this took place, it’s still a topic of discussion amongst the locals.

“It comes up every now and then,” Gene said. “It was an accomplishment. It was all volunteer (fundraising). Everybody put in quite a few hours. I think it’s a feather in everybody’s hat around here.”

The Joe Montana Days festivals came to an end, and the name of the town was changed back to Ismay around 2003, Gene said.

“Our help was getting less and people were getting older. You’ve got your own life you’ve got to live,” Gene said. “But I think you could still write a letter to Joe, Montana as far as the post office is concerned.”

“There were a couple put up because they mysteriously disappeared all the time,” Gene said.

A few decades have passed since Joe Montana was playing professional football, and since Ismay changed its name to Joe.

But for a short time, the little town in the middle of nowhere became legendary — like the famous quarterback himself.