Erin Baker has been diagnosed with terminal cancer; she plans to beat it 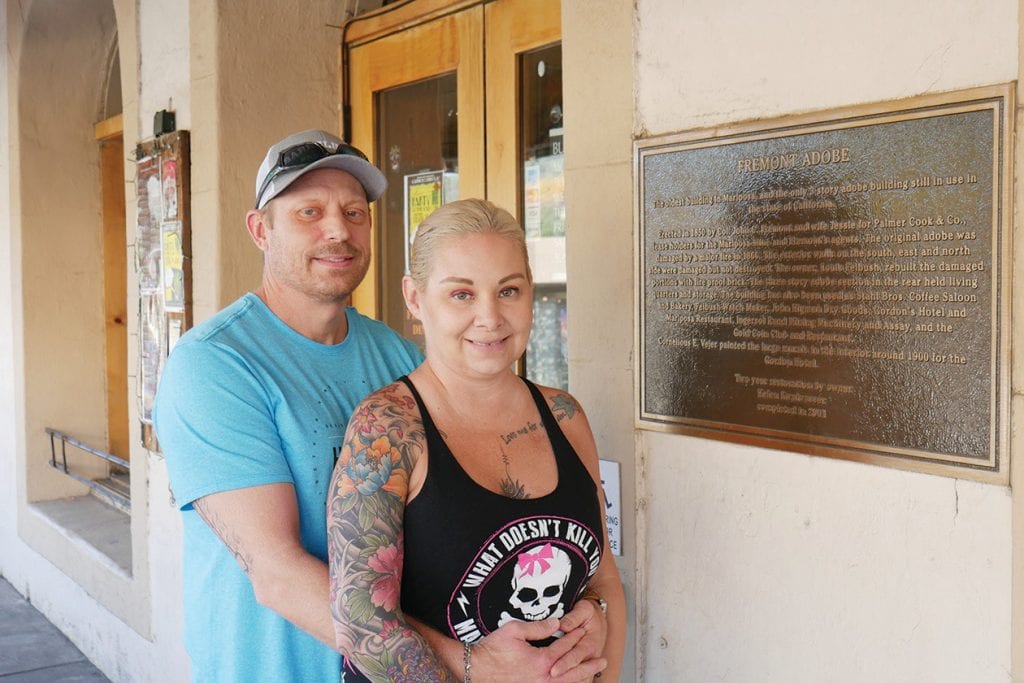 Erin and James Baker are shown in front the Gold Coin, the business they bought about a year ago. Photo by Greg Little

Erin Baker has been through more than most people can even imagine .

You would think being diagnosed with Stage 3 breast cancer in 2016 was about as bad as it can get.

You would be wrong.

Just last month, Erin, 40, who with her husband James owns the Gold Coin in Mariposa, found out even worse news.

Her cancer fight began in Florida in 2016 with that original diagnosis. She found lumps in her right breast and when she went to the doctor, Erin found out there were also lumps in her lymph nodes. They were the size of golf balls.

That’s when her journey with chemotherapy began. She went to chemo three days a week for eight hours a day. That lasted for six months.

“I had every side effect with chemotherapy,” said Erin.

That included immediately losing her hair, her fingernails and much more.

After the chemo, she then had to undergo many surgeries. She had a bilateral mastectomy and 22 lymph nodes were removed. She also had to have a procedure to “remove anything” related to estrogen.

Amazingly, though, by the middle of November of that same year, the doctors “said the cancer was gone and I beat it.”

She knew there were going to be more treatments and surgeries so in an effort to find the best medical care, she moved to Mariposa in order to be closer to the medical center at Stanford.

A medicinal port was removed from her body and things were looking up.

Also during this time, Erin and James took the plunge. The couple had lived together in Florida since 2015, but he moved back to his hometown while she was having medical work done in Florida.

On Oct. 30, 2018, they went to Las Vegas and got married. The next day, they came back and saw the Gold Coin was closed. James was the bar manager and the owner gave him the first option to buy the business.

Though both had limited restaurant experience, they took the risk and in November of last year, reopened the historic Gold Coin in downtown Mariposa.

Erin has been having breast surgeries since moving to California, noting she’s had “at least eight” since 2016.

“Finally,” she thought to herself, “there’s going to be an end to this whole thing.”

On Sept. 18 of this year, Erin said she was cleaning up at the restaurant when she “found a lump” on the right side of her neck. Erin said she “absolutely freaked out.”

She immediately contacted Stanford and said she needed to get in quickly to get it diagnosed.

Two days later, even though she didn’t have an appointment at Stanford though she had tried, Erin was going to the Bay Area and called the doctor’s office and said she was coming in and if they wouldn’t see her, she’d go to the emergency room to get a diagnosis.

They told her to come to the doctor’s office.

Erin said on the drive over, she discovered another lump in her neck and knew “someone needs to check this out. This is too much.”

They confirmed the lumps and the next week, a CAT scan was done on Erin. Incredibly, the medical officials uploaded the results through her phone app before they called her.

“It freaked us out,” she said of being able to see the diagnosis.

The next day, the doctors did call and the news was not good.

“They said I had a recurrence of breast cancer on my right side,” said Erin.

Then came the most devastating news.

They told her the cancer “had spread throughout my entire body,” including masses in her pancreas and abdomen.

It was Stage 4 breast cancer.

They told her it was “treatable but not curable.”

The doctors suggested she immediately begin chemotherapy “and do it every three weeks for the rest of my life.”

The other choice is to “wait” for possible other treatments or drugs that are being developed.

“I have a lot of unanswered questions,” said Erin.

One question she did ask was how long people with this diagnosis normally live.

She was told some people live two months, others two years. They said it was terminal.

Erin said she is now looking at other options, including those doing clinical trials for people who are terminally ill with cancer.

She has also found out that chemotherapy might not be an option because of her heart. They did a test on her heart and it was below the threshold needed to endure chemo. Erin believes her first round of cancer is the reason her heart might be weaker.

She goes to a cardiologist next month to find out more about her heart.

“I have a huge support team,” said Erin, referring to her husband and circle of friends who are “Christian believers.”

She admits she is “really depressed” and that it is “very difficult to get dressed” each day.

It’s also true that as more people find out about her situation, “it becomes harder, more emotional.”

Erin still wonders how this all happened, saying she has now been diagnosed in the same breast that was cancer free.

“It doesn’t make sense to me,” said Erin.

However, she’s not just wallowing in self-pity.

“I believe I am going to beat it,” said Erin. “I can’t see how God put me on this Earth and how God had me go through cancer … and go through it again. That’s not right.”

Her doctor told her there was “no way to prevent this from happening and no way I could have caused it. So how did this happen?”

Lately, said Erin, she has been “extremely tired.”

But, she said she is “refusing to live … on poison drugs all my life.”

For her husband, it’s anything but easy.

“I wish I weren’t so exhausted,” said Erin.

She also stays positive and is determined to battle the disease.

James calls her “stubborn,” which is a good thing in his mind, especially in this case.

Reflecting on what has transpired, Erin is almost amazed.

“This is so much in three to four weeks,” said Erin. “How quickly things can change.”

Though Erin said she doesn’t yet have an “exact plan,” she is adamant the fight will continue.

“I feel good, other than the tiredness,” said Erin.

For someone in Erin’s shoes, that is a big part of the battle.

Though sitting down for an interview about her condition was anything but easy, Erin said it’s the right thing to do.

“Women need to be in touch with their own bodies,” said Erin.

She’s hoping by coming forward, other people might read about it and take action if they think something is wrong.

She discovered cancer on her own both times by doing self exams and encourages everyone to pay attention to what’s happening with their own bodies.

“Go get a test right away,” she said.

In Erin’s case, there is “no history” of it in her family. She said doctors do plan to do genetic testing on her, but that doesn’t change the fact her family members cannot recall any history of the disease.

“I would tell every woman out there to know your body,” said Erin. “Life has thrown major curveballs at me.”

For James, he believes in what his wife says 100 percent and thinks everyone should pay attention.

In a twist of irony, James and Erin first met because they were both in the insurance business. He was on one side of the country in Oregon while she was on the other in Florida. James asked his bosses about finding an expert in a certain part of the insurance field, and it was Erin.

That’s how they met and from there, as they say, the rest is history.

But it’s that insurance background that James said has made him keenly aware of how cancer can impact anyone at any time.

Erin points out she was age 36 when diagnosed the first time.

James said he thinks everyone should take this seriously and, at the least, do self exams. He also said anyone who suspects any problems should immediately see a doctor.

For her part, Erin simply says everyone must be aware of their personal situations and make sure they get the expertise needed.

She also thinks her faith in God can help her through these difficult times.

“God does miracles,” she said.

Fund established to help with expenses

Because of the major expenses involved in fighting cancer, an account has been set up locally to help Erin Baker.

Baker and her husband, James, said there are many expenses related to getting treatment, including the fuel and hotel costs alone associated with going to Palo Alto. And those are just some of the expenses.

Erin has been diagnosed with Stage 4 breast cancer and her treatments will likely become more frequent — and expensive.

An account has been established at Westamerica Bank in Mariposa.

Anyone can donate to the account by simply writing a check or taking a cash donation in the name of Erin Baker to Westamerica Bank. The bank is located at 5121 Highway 140 in Mariposa.

Donations are also being accepted at the Gold Coin, the business owned by the Bakers.

From New Orleans to Mariposa: CostaLivos is a true tale of loveFuture of MPUD Fire uncertain; talks ongoingRoberts says he is seeking attorney