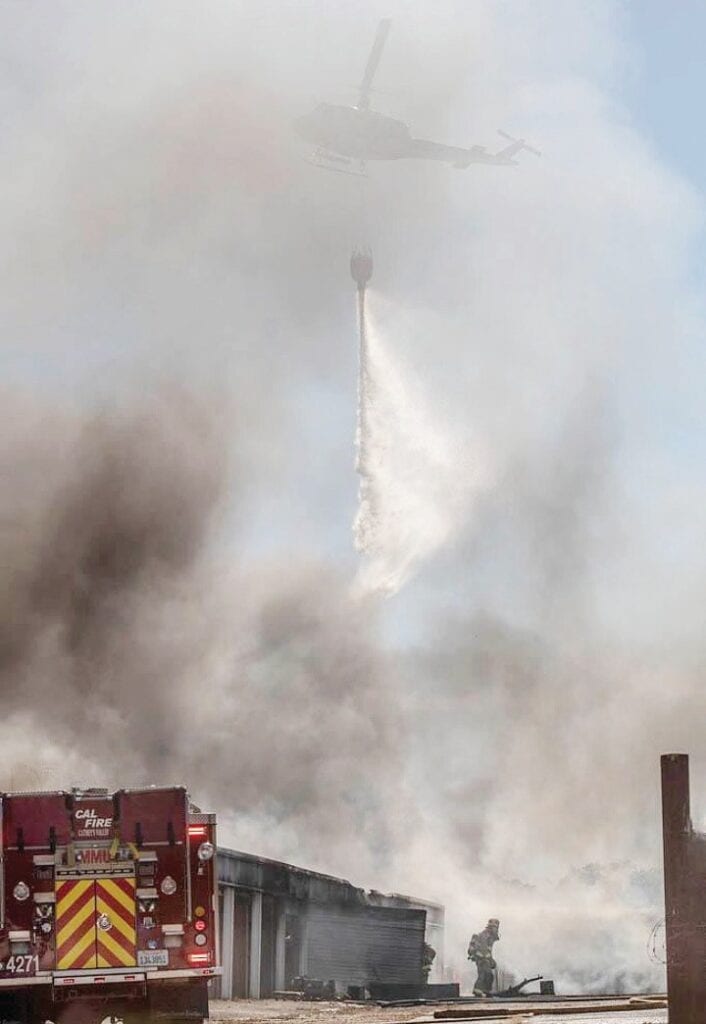 This photos shows a helicopter attacking a fire in the Lake Don Pedro area on June 18. High temperatures and dry conditions have gripped the area as fire season is underway. Photo courtesy CAL FIRE

Various smaller fires have scorched some of this area in the past week or more as hot weather and dry conditions make it conducive for these blazes.

One fire damaged some trailers and a storage building in northern Mariposa County, according to CAL FIRE.

The fire was on June 18 in the Piney Creek area south of Highway 132 between Lake Don Pedro and Lake McClure.

Jaime Williams, the public information officer for the CAL FIRE Madera-Mariposa-Merced Unit said the fire was reported at 3:56 p.m. and was considered contained by 8:30 p.m.

There were no reported injuries in the fire, she said.

Other reports indicated the grass fire was contained to less than an acre. There was no information available about any damage to the trailers or the storage unit.

The cause of the fire remains under investigation, said Williams.

There were mandatory evacuations issued by the Mariposa County Office of Emergency Services when the fire broke out. Also, there were air drops by both tankers and helicopters to extinguish the blaze.

On Monday afternoon, another fire broke out in the Mt. Bullion area. The fire was reported near Hunters Valley Road and Cotton Creek Road.

There were a couple of tanker drops reported, but the main method was from helicopters dropping water. The latest report indicated the fire was limited to under 10 acres, though the exact size could not be determined as of our press time on Tuesday morning.

John Morgan, chief of Mariposa County Fire, said “we are getting more vegetation fires” at this time.

Morgan said he has had several inquiries about people asking if they can mow their lawn and cut weeds in the afternoon.

“That is a tricky subject,” said Morgan. “It depends on how you are doing it.”

He said green lawns which are irrigated are “fairly safe” to mow.

However, he added that “anytime you use a metal bladed item to cut grass, you have the opportunity to strike a rock which can start a fire.”

CAL FIRE recommends any mowing be done prior to 10 a.m.

Lightning fires in the forest

One of the largest was the Tennessee Fire, which was listed on Tuesday at 35 acres and 30 percent contained. It started on June 14 and is located in the High Sierra Ranger district just inside the Ansel Adams Wilderness.

The fire was reported by personnel in a helicopter which was conducting a reconnaissance mission on the Rube Fire, which began on June 13 and was just one acre.

The fire was reported burning in a heavy dead and down timber area.

At the same time, the spotters also discovered a small fire of about one acre called the Fox Fire in the High Sierra district.

The Fox Fire was just one acre and has been 100 percent contained. A lightning strike to a single tree was reported as starting the fire.