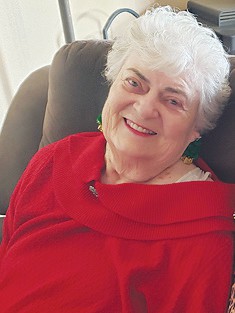 Shirley Ann (Macha) Rodriguez passed away Jan. 14, 2021, under the wonderful care of both Pacifica Assisted Living and Bristol Hospice in Merced, Calif.

Shirley leaves behind her three adult children: son, Roddy and Jenny Rodriguez of Snohomish, Wash., son, Jeff Rodriguez of Pinole, Calif., and daughter, Lori and Bruce Vegely of Mariposa. She also leaves behind what she considered her most valued treasures, her five grandchildren. These children were her pride and joy and they affectionately called her “Mammo.” They are Rebekah and Victoria Rodriguez and Bodie, Jessie, and Taylor Vegely.

Shirley was preceded in death by her husband, Art Rodriguez Jr., both of her parents and her brother and sister-in-law, Edward Frank Macha Jr. and Audrey Macha of Merced.

Shirley will be missed by multiple nieces, nephews and cousins who she loved dearly.

Shirley loved to attend any and all social gatherings because she always stressed the importance of family and friends and refused to miss out on making memories. At age 11, Shirley and her family moved to Aptos, Calif., and Shirley graduated from Watsonville High School, Monterey Peninsula College and San Jose State University.

While growing up on the coast, Shirley enjoyed volunteering in the local 4-H club, taught Sunday School at the First Christian Church in Watsonville and later became the first elected female to serve as a deacon in the congregation. Shirley was very committed to her faith and enjoyed sharing the word of God with both prayer and stewardship and she was a devout wife, mother and grandmother.

Art and Shirley sold their home in Elkhorn (Castroville, Ca.) and moved to Catheys Valley, Calif. in 2007. There, Shirley often worked as a substitute teacher at Catheys Valley Elementary School, attended all the local team roping events with her husband and loved worshiping at the Mariposa United Methodist Church.

After the passing of her husband, Shirley lived with her daughter and family for two and a half years in Mariposa and loved attending all of the Bears Middle School volleyball games and Mariposa County High School sporting events.

Shirley Rodriguez will be remembered for her devout faith in God, her hilarious sense of humor, her zest for life and her unwavering ability to always treat others with kindness. In lieu of flowers, the family requests that donations be made in memory of her to the Mariposa United Methodist Church.