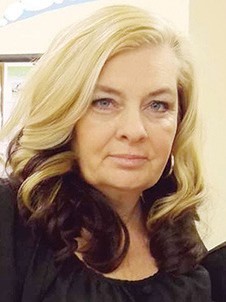 Born Sheila Elaine Stockdale in Oahu, Hawaii, on Feb. 22, 1964 to Charlotte and Bob Stockdale, she was preceded in death by her parents and her brother, Lee Stanley Stockdale.

She is survived by her children, Bobbie Jo, Chad, Rebecca, Robert and Serenity, and grandchildren River, Orion, Meadow and DJ. Sheila is also survived by her husband, Robert “Bobby” Moreno, with whom she was madly in love for 30 years.

A tireless worker who loved her community in the beautiful mountains she considered an oasis, Sheila’s dreams came true when she became a grandparent.

Holidays were Sheila’s favorite. She took every chance she could to celebrate life, and she loved the Lord. Crazy about old black and white movies and anything with Marilyn Monroe, she was a well-respected woman who, among life’s little pleasures, liked to have her nails done nicely.

A favorite pastime was heading out to car shows with her husband. Recently, Sheila had joined the Red Cross as an emergency volunteer. Once a lifeguard, she couldn’t wait to get to the lake near her house, but her favorite saying was always “Family first.”

With her typical great sense of humor, Sheila would say that she didn’t like to cook so she married a chef. The Morenos took charge at Robert’s Frosty in Coarsegold in 2010.

A celebration of life for Sheila Moreno is planned from 3-9 p.m. on Friday, April 23 at the Coarsegold Community Center located at 35610 Highway 41 in Coarsegold.

Everyone is invited to bring a dish they love to the pot luck-style event and family reminds guests that Sheila would not want people to wear black — instead, the theme is pink ‘n bling.

Condolences may be sent to Robert’s Frosty located at 35297 Highway 41 in Coarsegold.

‘Till the end, my friend.