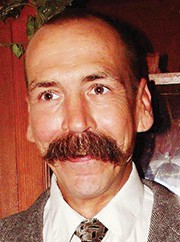 Shane Henry Kimbro passed away at home June 13, 2020, the day before his 59th birthday. Exact cause of death is not yet known.

Shane was born June 14, 1961 in Alameda, Calif. He attended schools in Clayton and Atwater, Calif., Catheys Valley and Mariposa Elementary School. He graduated from Spring Hill High School ahead of schedule in 1978. During high school he helped in the family sign and screen printing business.

After graduating, he spent some time in Carson City, Nev. He worked in a screen printing shop and as a correction officer in the minimum security prison.

He returned to Mariposa and was employed as a carpenter for several years. He enjoyed working with wood and building a variety of things.

Shane also loved rocks and minerals. He worked 12 years as a blast miner, mostly in the Colorado Mine. While there he experienced the excitement and privilege of finding one of the world’s largest and most exquisite pieces of crystalline gold.

From early childhood he demonstrated exceptional artistic skills. He frequently sketched caricatures and made a variety of items that pleased his children and/or friends. Often he played a guitar and wrote several poems.

He was preceded in death by his father, Jack Kimbro, and sister, Kelly Jo.

Shane was known for his smile, sense of humor and quick wit. He had become somewhat of a “Barefoot icon” to many.

A memorial will be announced later, tentatively September.

One response to “Shane Kimbro”