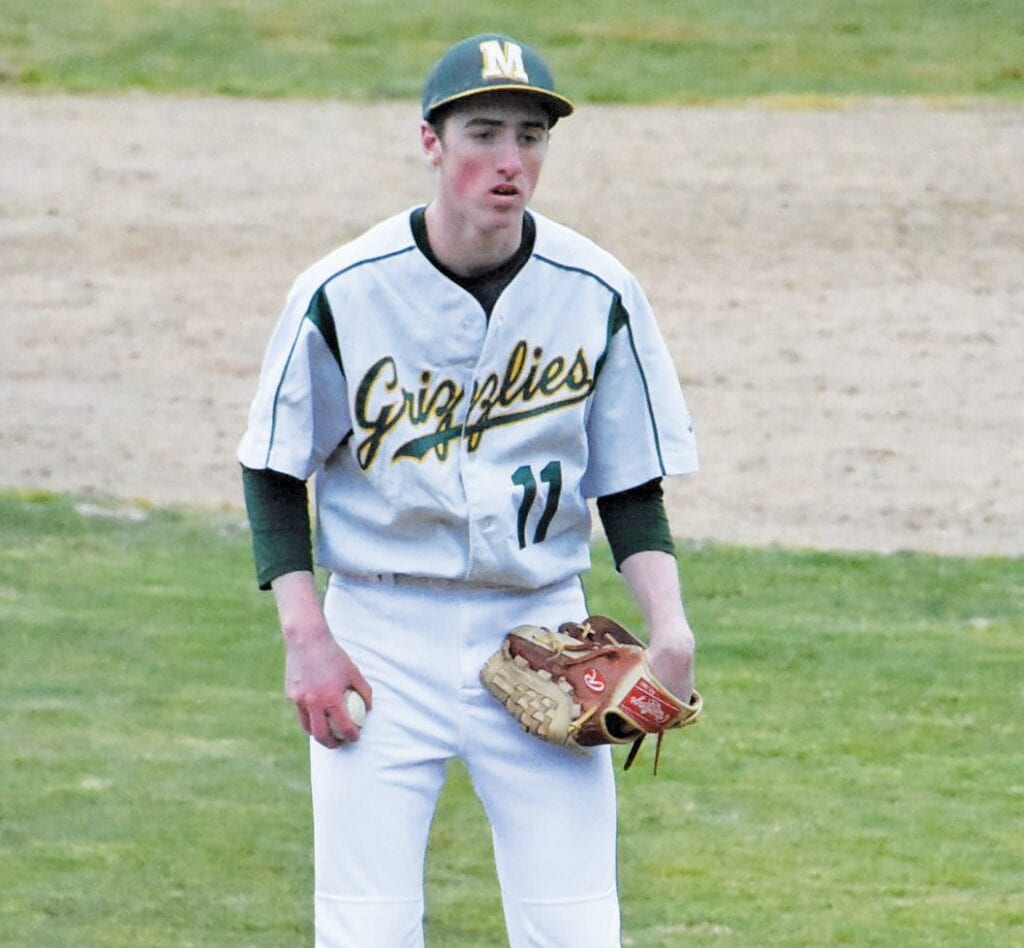 Will Harris, shown on the mound, is a fiery competitor. Photo by Matt Johnson

Will Harris (right) is shown trying to slow down rival Le Grand during a game this previous season. Photo by Matt Johnson

Drive up the long driveway to the Harris household, and you’ll know right away that athletes live there.

There are batting cages situated not far from a basketball hoop which looks to have been used plenty.

Both are athletics junkies who play multiple sports. Will played basketball in the winter and was playing baseball this spring before it was called off.

He is known for his scrappy play and his positive attitude on the playing fields.

Here is a bit more information about the senior standout.

You have a sister who is athletic as well. Are you guys supportive of each other, or do you rib each other? When it comes down to it, we support each other. But we give each other a hard time, if one of us goes 0-for-3 at the plate. She was a freshman on varsity at one point, so I would say things like, ‘C’mon Megan, it doesn’t look like you belong there right now.’ There is some bickering. We keep track of each other’s stats. It keeps us going. I think it’s healthy competition.

You were a key part of the 2019 section finalist baseball team at MCHS. You nearly rallied the team from a massive deficit with your inspired play in the championship round. What are your thoughts looking back at that squad and that championship round? I came off the bench that game. I knew I had to stay ready. The entire week my coach told me we’d need to be ready to go. I was going through a rough patch at the time, struggling at the plate. I think in the first at-bat I fouled off a couple pitches. Then I gained some confidence and smacked a couple. I think as a team, together as a whole, we never felt out of it. We didn’t think it was possible to lose. We lost, but I think in our heads we always felt that no matter what happened, we were going to come back and we had a chance as long as there were a couple innings left. We beat ourselves in that game; they weren’t beating us. We felt we were still the better team.

What do you think the potential of the 2020 baseball team was, before the season was called off? I think a lot of the seniors who were there last year knew it was our last chance. We were going to make a push for it. We had pieces in place and had pitching. I remember after the football team won the section championship (in the fall), I remember football player Jake Swift racing up to me telling me this was going to be us in baseball. We were just hitting our stride when the season got canceled. We beat Turlock Christian, Mendota and Yosemite. We were rolling. It sucks it got cut short.

Favorite and least favorite drills to stay in shape? I just enjoy sports. Whether it’s with my dad, playing one-on-one in basketball. I would also do summer leagues and AAU, which would keep me in shape. Then we have the batting cage. There’s something about hitting baseballs. It relieves your stress trying to hit something as hard as you can. I remember in my sophomore year, I got really into running. I ran a half marathon … That was fun. I’ve always enjoyed competition. It’s been fun and easy to stay in shape. I find ways to make it competitive.

Do you enjoy playing basketball or baseball more? Baseball. I grew up loving baseball, especially watching it. I go to Giants games. I love everything about it. Baseball is more mental than a lot of sports, and I enjoy that part of it.

Hobbies, aside from sports? I really like doing things in the outdoors. I’m into hiking, backpacking and fishing. I enjoy rock climbing. I was into running for a little bit.

What is your greatest accomplishment as an athlete? Making it to the section baseball championship was a big accomplishment. I’ve had a couple good personal games. The last game I pitched, against Mendota, I threw a one-hitter. I had a walk-off against Ripon Christian. Mainly, my accomplishments center around baseball.

Who are you grateful for; who got you to this point in your life or in sports? Definitely my parents. My dad (Chris Harris) works out of town, but I don’t think I was ever late to a practice or game, even in Little League, thanks to my mom (Melissa Harris). Whenever my dad gets home, he makes it a point to pitch to me in the batting cage, play basketball or go to Woodland and take ground balls. He’s always pushing me. … He has helped make me the best player I could be.

What are your plans after high school? I will go to the University of Nevada and will major in business marketing.

Favorite athlete? I really like Brandon Crawford, the shortstop for the San Francisco Giants. There’s just something about him. When I first was getting into baseball, I liked Pablo Sandoval, “The Panda.” But when he left and went to the Boston Red Sox, it broke my heart and I became a huge Brandon Crawford fan. He plays the game the right way. He isn’t super flashy. He does everything on the defensive end and is a consistent Gold Glover. Then he came up clutch with the bat. … I used to call him Clutch Crawford. My dad and I would get in arguments about who was most important to the Giants teams, but I always grew up admiring him — his work ethic and the way he played the game.