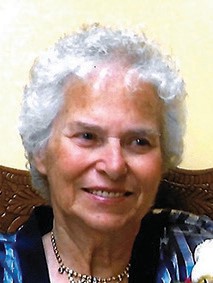 Ruby Mildred (Wass) Beattie took her flight to heaven on Dec. 24. She fittingly received this gift, as she was in her element on Christmas Eve, where she always hosted the best open-door party; the night filled with fun, love, laughter, presents, and so much good food, all to the pleasure and delight of family and friends who attended.

Ruby attended the Chowchilla Mountain School and graduated from Mariposa County High School in 1950. Soon after graduation she married Monty Landy. Although the marriage ended in divorce, Ruby felt blessed with two daughters and a son from the union.

She married Robert M. (Bob) Beattie in 1961 in Culver City, and soon after added another daughter to the family. Staying in the Los Angeles area during the 60s, Ruby raised her family, worked as a waitress and later as the office manager for Bob’s plumbing business. She was an active member of the Emblem Club, participating in Christmas bazaars and children’s parties, sending care packages to the military in Vietnam and being the lead in her favorite fundraiser, the “Bakeless Bake Sale.”

In 1973 the family returned to Mariposa and Ruby was glad to be home and close to so many family members. Not one to sit idle unless she was reading (her favorite pastime), Ruby went to work as a waitress at Del’s restaurant, later changed to the Sugarpine. After many years, she opened her own restaurant, Ruby’s (now Don Ruebens), where good food, good friends and a good time could always be found, especially on a Friday or Saturday night with John Rarig at the piano and Sue Hamp singing, along with silly skits put on by the waitresses. Many have said Ruby was the best boss they ever had. After selling the restaurant, she worked at Yosemite Bank until she retired to care for her mother-in-law, Delight Chase.

Ruby is preceded in death by her husband of 50 years, Bob, and her son-in-law and grandson, Robert and Tom Holt, as well as many loved brothers and sisters.

She is survived by sisters Clara, Gladys and Mary; brothers Bill, Jack, Kenny and Rodney, as well as many nieces and nephews.

Her children, who will miss her dearly, are Vicki Brower (Randy), Suzanne Hicks, (Gordon), Rick Landy (Terri) and Angela Steele ( Joe). She leaves grandchildren that brought her much joy: Jon, Bill, Dede, Derek, Jenna, Jovan and Elizabeth, and 14 great-grandchildren.

If you ever spent even a short time with her, she became Grandma Ruby or Aunt Ruby to you forever — and of those there were many.

Services will be held at the Mariposa Funeral Home on Saturday, Jan. 25 at 1 p.m. (A funeral visitation will be held the night before from 5–9 p.m.). There will be a brief gathering at the Masonic Cemetery after services. The family hopes you will join them at the Masonic Lodge after graveside services to share in a potluck get-together of family and friends.