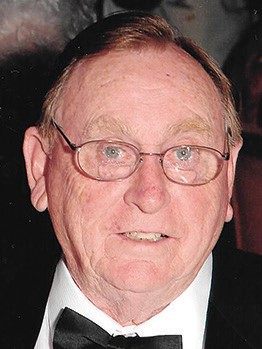 Ron is survived by his wife of 21 years, Evi; son, Steven; daughter, Pamela; grandchildren Ryan and Kristen, and Evi’s daughter Debbie and husband Frank Giordano; her four grandchildren and seven great-grandchildren. He was preceded in death by his first wife, his son Alan, and Evi’s son and daughter in-law.

At the age of 14, he started night school to become an apprentice painter and paperhanger. He worked as a painter during the day, pushing his equipment on a bicycle to and from work. In the evenings, after night school, Ron and his buddies would go to local dance halls, where they’d dance with “wallflowers” so that they could dance for free.

He immigrated to the United States in his 20s with his first wife, living in Michigan before moving to California. He lived in Pacific Grove and then in Mariposa.

Ron was a master painter; he was known for mixing his own paint colors and was usually booked with work six months ahead. He painted many private homes, the hotels in Yosemite National Park, and the courthouse and Masonic Hall in Mariposa.

He retired to Kern City in Bakersfield in 2005.

Ron especially liked to read while listening to a wide variety of music. He also relished the library at Town Hall.

Ron was a member of the Masons, British Clubs, many dance clubs and Our Music Makers, a karaoke group in the Town Hall.

Ron was a blessing to those around him and will be deeply missed.