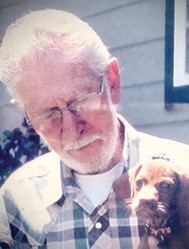 Rodney was born in California to parents Elvetzi Cantarini and Myrtle Milburn Cantarini, and was preceded in death by his older brother, Elvetzi Jr., known as “Jerry.”

He shared his life with his wife Jeannine until her passing 30 years ago. He is survived by three children, Dino and wife Renata, Vincent and wife Carla, and Debra and husband Scott, along with seven grandchildren and nine great-grandchildren.

Rodney, also called “Rod,” was a notoriously hard worker, and a man of many interests and talents. An aeronautical engineer by trade, there was nothing he couldn’t build. He was also a “car guy” and he spent the tail end of his career as a friendly face at the local Napa Auto Parts and could be seen driving around town in a vintage Ford Falcon Ranchero. He was even featured in an issue of Hot Rod Magazine in 1956.

Rod also loved animals. He and Jeannine moved from San Diego to Mariposa County in the late 1970s to have a small country farm with goats, sheep and a number of other critters. They became involved in the community here and Rod continued to explore new hobbies — he and Jeannine participated in the Mariposa County Fair, hosted “sheep shearing parties” and dabbled in wine making, animal husbandry and stained glass making. Later in life, he committed himself fully to keeping the wildlife of Bootjack well-fed.

His last love was a Vizsla pup named Penny, and his eternal resting place is snuggly between her and his wife, alongside several other beloved family dogs.

In lieu of flowers, donations can be made to the Mariposa SPCA.