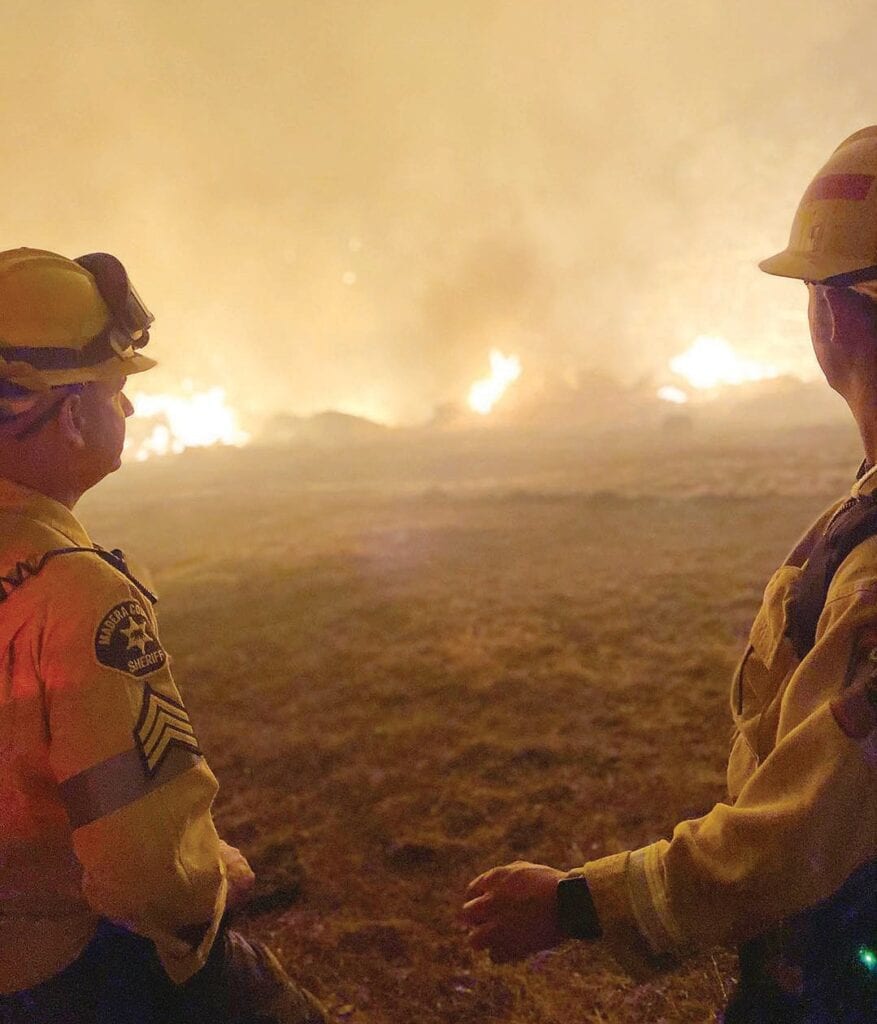 Editor’s note: The River Fire was listed as 9,500 acres by CAL FIRE as of Thursday morning. It was also listed as 36 percent contained. All evacuation warnings have been removed but officials caution drivers to stay clear of the area because there is a lot of fire personnel and equipment on the roadways. We’ll have more about the River Fire in our next edition.

Driven by wind in terribly dry conditions after days of extreme heat, the River Fire began in Mariposa County just after 2 p.m. on July 11, destroying the calm of a sweltering Sunday afternoon in the Sierra, and quickly burned into Madera County — growing to some 4,000 acres before “day one” was done.

As of Tuesday morning, the fire was nearing 10,000 acres. It started on Sunday in the vicinity of Oak Grove Road and Oak Grove School Road, according to CAL FIRE, not far from the Mariposa/Madera county line.

Less than two miles away on Road 800, a.k.a. Bailey Flats Road, Patricia “Pat” Masoner was alerted to danger when the phone rang with calls from friends saying, “fire on Road 800!”

“I went outside and looked from our patio and could see exactly where the fire was, not on 800 but on the Grupe Ranch,” Pat said in a phone interview with the Gazette.

“While I was talking, it went from this white plume of smoke to dark, dark clouds and started moving so fast it was unbelievable. The wind was going pretty good then; it was just amazing to me to see how fast that fire was spreading.” 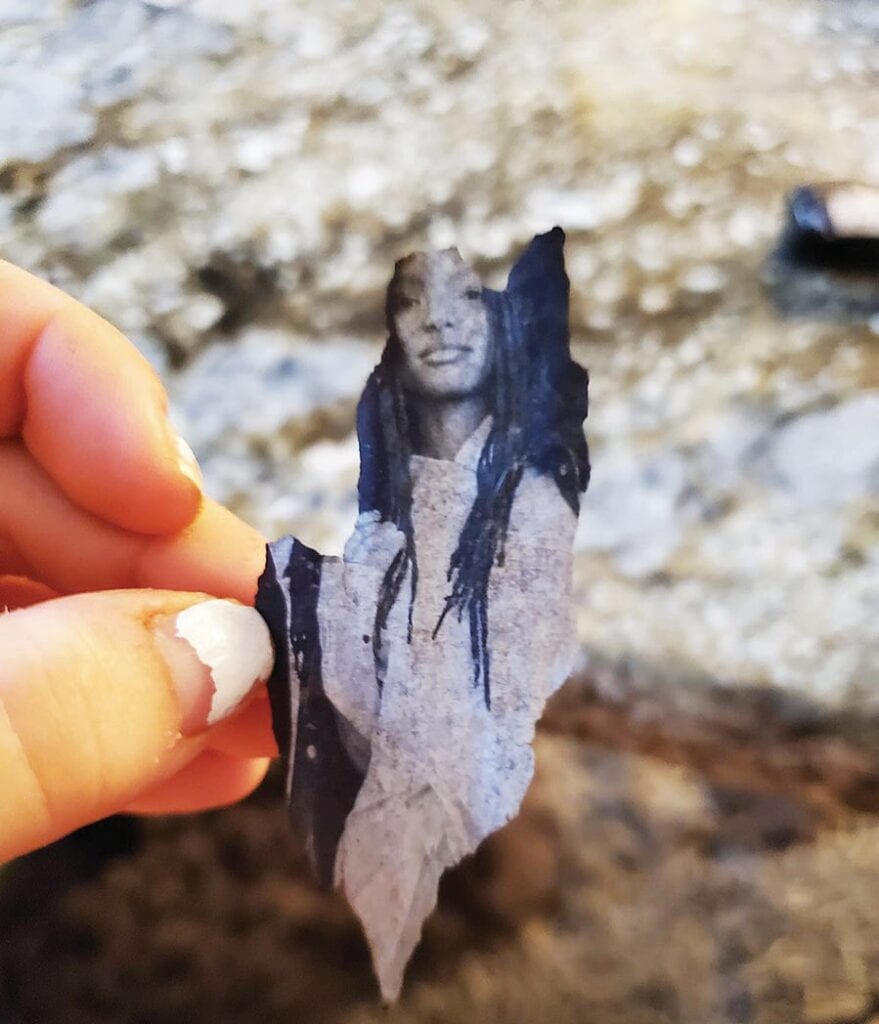 Coarsegold resident Whitney Juras found this piece of burned paper on her driveway amid burned leaves, far from the River Fire, carried by wind as ash rained down all day. Road 800 is about 19 miles to where Juras lives, and it’s unknown where exactly the ashy paper came from. It appears to be a newspaper or magazine, rather than a photograph, but there’s no writing on the back. Photo by Whitney Juras.

Masoner has lived in Raymond for 22 years, on a cattle ranch that continues into Mariposa County she first purchased with husband Calvin in 1988. Calvin passed away five years ago and the couple’s daughter and sonin law now live on the 1,800 acre Masoner Ranch, with Pat and about 80 head of cattle they own, plus some to whom the land is leased.

Neighbors were alarmed by the blaze, but as Masoner and family watched the winds blow east/southeast from her place, they weren’t really that worried. The fire was on the other side of the Chowchilla River that runs through the area and was quickly dubbed the River Fire.

“CAL FIRE — they are amazing. Whenever there’s a fire, they’re right on it and they take care of it so we weren’t that concerned. I didn’t really feel the threat. Until, of course, later in the day.” 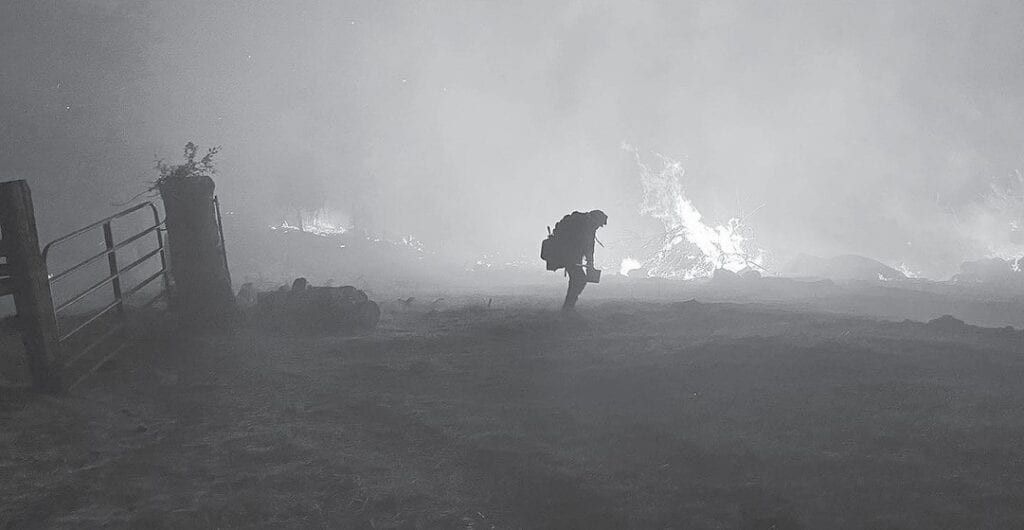 Emergency personnel are working around the clock to fight the River Fire, including proactive patrol of evacuated areas as shown in this Madera County Sheriff’s Office photo. The situation was being closely monitored as crews on the ground and in the air battled the fire back to prevent it from spreading into more populated areas including Ahwahnee and Oakhurst. Photo courtesy Madera County Sheriff’s Office

The fire was burning quickly in oaky grassland, pushed by winds as firefighters battled extreme heat on top of the flames. Excessive smoke clouds gathered and choked the foothills and Central Valley, as the River Fire spread into Madera County.

“They were talking about evacuating Road 800,” Masoner said. “The sheriffs came by and told us we had half an hour to get out. My son-in-law told them we were going to wait another hour to see what was happening.”

By this time, Pat Masoner had already started packing.

She called her pastor to have him pray “for everybody.”

“We decided to stay.”

Masoner has a neighbor who lives up higher with a better view of the happenings and a firefighter husband.

“She said, ‘I’m watching the fire, you’re fine. As soon as I see anything coming over that ridge I will call you.’”

Everyone else around the area had already left.

“There are just two of us (families) who remain on Road 800,” she explained. “We’ve kept in close contact.”

Masoner’s phone turned into a communications hub with about 100 calls a day from evacuated neighbors wanting to know when they can come back home and how things really are. Masoner and company has hopped on the quad to feed neighbors’ pets and cattle, and do whatever else needs to be done.

“One family left so fast they didn’t close their door all the way, the door was wide open,” Masoner said, adding she shut the door.

She understands exactly how that could happen: evacuation is a whirlwind. Masoner pointed out it’s important to have the cell phone numbers of all your neighbors, if possible, so you can contact them if there’s a problem with their property.

By 10 o’clock Sunday night, the River Fire had grown to 4,000 acres with 5 percent containment as more than 250 firefighters continued their aggressive attack in hot, dry, windy conditions.

An evacuation center was set up at the New Life Christian Fellowship Church in Mariposa County for evacuees in both counties.

Overnight from Sunday into Monday, winds shifted favorably as predicted and crews were able to manage backfire operations with the intention of keeping the River Fire from its approach toward the heavily populated foothill towns of Nippinawasee, Ahwahnee and Oakhurst.

Firefighters worked hard to construct and reinforce control lines as the day dawned, and Monday’s morning report from CAL FIRE said one structure and four outbuildings had been destroyed. The cause of the fire was under investigation.

The state agency said numerous firefighting air tankers from throughout the state were flying fire suppression missions as conditions would allow but, as the day grew hotter and winds shifted again, smoke hampered fixed-wing aircraft and additional helicopters were urgently ordered. The blaze made significant runs, spotting out ahead as crews on the ground battled extreme fire behavior.

By Monday night, the River Fire had more than doubled in a day, growing to 9,000 acres with 10 percent containment. Four structures and four outbuildings were reportedly destroyed even as 1,200 to 1,300 personnel remained on scene, including engines from across the state, while the attack continued. Low humidity, tree torching, wind-driven runs and spot fires remained a challenge and damage assessment was ongoing. No firefighter injuries had been reported.

Overnight into Tuesday, favorable winds allowed for additional backfiring operations and the fire was said to have grown just 500 acres to 9,500 acres, mostly in Madera County. Containment as of Tuesday morning was 15 percent. CAL FIRE said 212 engines, 20 water tenders, 20 dozers and 31 hand crews were on scene.

As temperatures cooled into the week, the mood was hopeful but guarded as the fight to hold back the River Fire was in no way over or done.

Mandatory evacuations persisted for portions of roads in Madera County including Roads 800, 810, 812, 600 and Apache. Warnings continued for parts of roads including 600, 612 and 415. In Mariposa County, evacuations were reduced to warnings for Indian Peak at Usona to Road 800, Oak Grove Road at Oak Grove School Road to Road 800 and Stumpfield Mountain Road from Leonard Road to the Madera County Line.

“They were doing backfires yesterday to stop it from coming,” said Pat Masoner from home on Tuesday morning. “We could see flames all night. We have so many firefighters there, we felt very safe. I can’t say enough about them. They are amazing.”

And that’s how she feels about living in the foothills, despite the threat of drought and fire.

“I wouldn’t trade it for anything.”

For history buffs, it’s interesting to note the River Fire broke out 60 years and one day after the infamous Harlow Fire in Madera County, which ultimately burned more than 43,000 acres and remains among the fastest moving wildfires in California’s storied fire history.

CAL FIRE said this week’s hot and dry conditions continue to drive an increase in wildfire behavior activity across the Golden State.

“It’s now more critical than ever that all Californians are prepared for wildfire,” said a statement from CAL FIRE, which has warned residents of the state for months about the fire danger in 2021.

From the flamesMother prepares for trial involving alleged sex crimes against daughterTo mask or not to mask, that is the big question