Chevon Kothari reflects on HHS, Covid and the future 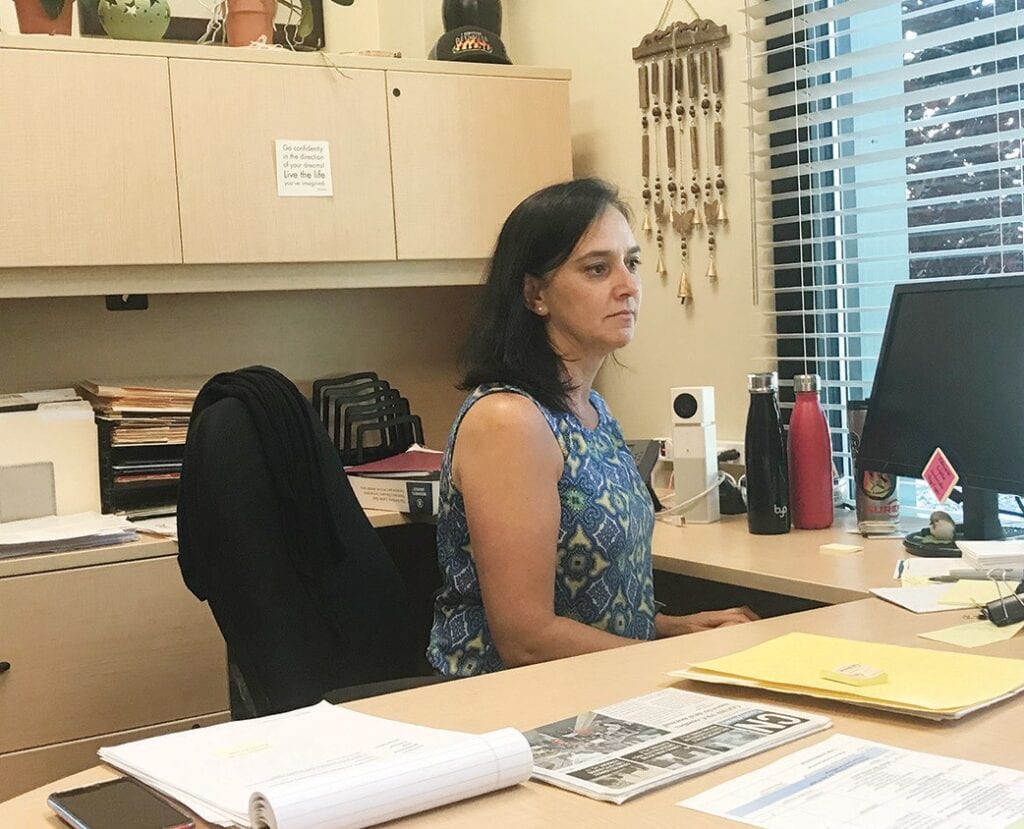 Chevon Kothari works at her desk at Mariposa County Health and Human Services in Mariposa. She will be leaving her position to take a job with the state of California. Photo by Greg Little

If you think Chevon Kothari is above talking to the homeless or even scrubbing a bathroom, you would be wrong.

“I like to think of myself as a supportive leader,” said Kothari, director of Mariposa County Health and Human Services Agency (HHS). “It is important to talk to people. To get that first hand.”

The Covid-19 pandemic was another issue that surprised a lot of people. But Kothari said Mariposa County had a big advantage — Dr. Eric Sergienko, the county health officer.

It was in January, said Kothari, that Sergienko began “talking to us” about the disease that was spreading in Wuhan Province in China. She also said he was talking to members of the Mariposa County Board of Supervisors at the same time.

“He saw the writing on the wall,” said Kothari.

By March, that writing was in bold and all caps.

“This is coming to the U.S.,” was the conclusion, she said. “This is going to be a big thing.”

Kothari gives Sergienko a lot of credit for being informed and informing others. She said he could sense “the trajectory of the disease.”

Because of that, Kothari said she believes Mariposa County “ramped up quicker” than most counties in California. She said officials were “meeting regularly” and one thing Sergienko emphasized is “there is not a boundary around Mariposa County.”

Both of those counties sought out the services of Sergienko to be used, as she put it, “as a loaner” until they could get people in place.

At the time, with a pandemic brewing, Kothari thought it was a “bad time” when the subject was broached, but she worked with Sergienko who said he could handle it, at least for a while.

“It worked in our favor,” said Kothari.

As it turned out, because the counties share one major asset — Yosemite National Park — it meant area coordination was going to be central in the game plan to fight the virus.

Once the decision was made, Kothari said she immediately appointed a full-time assistant for Sergienko, knowing he was going to be pushed to the maximum.

Another huge factor, said Kothari, was the history of disaster response in Mariposa County. Since 2017, the county has witnessed three major fires and two major flooding events.

“Had we not operated in disasters before, I don’t think it would have been as smooth for us,” said Kothari.

She is the first to say that a “pandemic is not a fire,” however, even in all of that, Kothari said the training and cooperation which came from those other disasters was a major player in how the county has responded to Covid-19.

“We were able to adopt the model that we had,” said Kothari.

It just needed some fine-tuning because, as she said, a pandemic is a lot different than a fire.

Part of the learning process from those fires was developing an “unmet needs council” which consisted of local officials, church leaders, business leaders, community members and more.

“We used that as a model,” said Kothari. “I think it was a life saver.”

As someone who has close contact with various county officials around the state, Kothari believes having that experience helped tremendously because “other health departments were not as involved.”

It cannot be lost, too, that in the past two years, what was once a stand-alone health department in Mariposa County merged with human services and is now part of HHS.

Merging major departments like that is no easy task and even though there were bumps in the road, Kothari believes that doing the merger actually helped when it comes to dealing with the pandemic.

“There is strategic planning and building a system of care,” she said.

Besides all of that, there are also the human relationships which come with merging departments. There were certainly some tensions during the merger, but Kothari summed up that relationship building in one word when it comes to how they approached the pandemic: “Huge.”

She said the relationship actually “started to build in Detwiler” and has evolved since.

Kothari said during the transition, officials realized both departments have many common goals.

But it also took some intestinal fortitude to make the transition work.

“We have a good ability to set aside egos,” said Kothari. “It has worked out really well.”

In fact, Kothari said discussions were held about who would be the director of HHS — her or Sergienko. She was fine with either scenario and said Sergienko was, as well.

In the end, Kothari said the administrative side of the department is something she enjoys while Sergienko likes to focus on more nerdy duties, like science and medicine and public health.

It seems the marriage of the departments has thrived.

The realities of a pandemic

Once it was obvious the pandemic was here to stay and the state began shutting down various aspects of business, Kothari said the groundwork in Mariposa County was quite far along.

In fact, one aspect was so far along Mariposa County will forever have a notch in its belt thanks to the work by Kothari and her HHS team.

That notch is “Project Room Key,” which was quickly announced by the governor. That project included massive funding to get homeless people off the streets and into appropriate housing to slow the spread of the virus.

Officials quickly used those funds to rent an entire hotel and then began moving the homeless out of local encampments and into those rooms.

Even those who were not comfortable moving to a hotel were encouraged to at least have tents in the homeless area located near the HHS building. Most complied.

HHS also instituted the program of having hand washing stations around the county and they secured as much personal protective equipment and hand sanitizer as they could find.

Kothari said they also began ramping up their public information efforts, including social media, an area she admits they did not use well before the pandemic.

“We needed to get community buy in,” said Kothari.

She believes that has paid off, noting that in some counties, health officials have resigned, some because of death threats from people who believe they are intentionally trying to hurt the local economy.

“People here were looking for us to stay safe,” Kothari said, adding she believes those early efforts set the tone for the entire community.

Not only does a pandemic, obviously, cause a major medical impact on people, Kothari said another big factor is the “social impact.”

That includes children not being able to go to school and parents having to stay home or find other methods. It can also have major mental health implications, she said.

One thing they did was ramp up their efforts in contacting people remotely. That includes tele-counseling and even tele-psychiatry.

“There is a lot of social anxiety,” she said.

They knew there had to be a big effort to stay in contact with people during the pandemic.

“It forced us to implement it and test it out,” she said.

Interestingly, Koathari said their rate of contact with people actually has increased during the pandemic.

She believes part of it is some people feel more comfortable being able to talk to someone using their phone rather than coming into an office setting. It is also helpful because Mariposa County is so rural.

“What are the lessons learned?” Kothari said is one of the big questions they have been answering throughout the crisis.

One answer: “We cannot allow ourselves to slip back into the old ways.”

Kothari also said that building relationships over the past six years really paid off when the pandemic became a reality in California.

“The state moved quicker on some of this than people would have imagined,” she said.

And Mariposa County, because of those relationships, was also moving quickly.

In fact, she believes the pandemic may mean some permanent changes across the state. Finding housing for the homeless in the county is one example, she said.

Kothari said there are plans in the state to find a permanent solution for homelessness, including possibly buying hotels and other facilities. She also said money for housing is being discussed as well as more “outreach and awareness.”

Kothari, too, knows there is “a lot of poverty” in Mariposa County, much of it “unseen.”

But the virus impacts here even on that community have not been at the same level as other places.

“Early on, we started messaging,” she said.

Kothari also believes people in Mariposa County, even those in poverty, “want to do the right thing.”

She also believes there is “more trust” in the community because of the major fires residents have faced.

Kothari took the job as director of human services after spending time at the Alliance for Community Transformations, which includes Mountain Crisis Services. She was director there before taking her current position.

On the wall in her office is a poster she received when she left Mountain Crisis Services. It has one word: collaborate.

“The one thing I try to do is bring people together to provide solutions,” said Kothari.

She said building relationships and collaboration to all aspects of her job is crucial. That can be working with the board of supervisors or visiting homeless people.

“I am really proud of that,” said Kothari.

She’s also proud of the fact she is not a micro-manager and believes in “giving the team more opportunities to collaborate.”

In fact, she is the first to credit those who work at HHS for its success.

“The team obviously does all the work,” Kothari humbly says. “The team has risen to the challenge. They are more accessible, more available.”

Kothari also thinks that having worked at Mountain Crisis, where she did budgets and cleaned bathrooms, has helped her in leading the large team at HHS.

“I like to be in the trenches,” said Kothari. “We do what we need to do to get the job done.”

Kothari also said it is crucial to make sure the “front line employees” understand their crucial role.

“The first moments will make or break us,” she said, adding she regularly tells them about the importance of their work and how much it is appreciated.

Kothari has not only been in the middle of a pandemic, she’s also had to keep the normal operations going as well as figuring out how to move to Sacramento next week.

That’s left little time for reflection, especially when it comes to all of these years living in Mariposa County.

“I would tell people this is an amazing, strong, resilient, loving community,” said Kothari. “We have the capacity to do things that other communities could never achieve.”

She also strongly believes that as a community, all of us our better off if we think of ourselves as one.

“Everyone’s lives are better when we lift up the most vulnerable,” she said. “It makes us better people.”

Kothari said she has “been incredibly happy and proud” to have lived in this county and feels that experience will be invaluable in Sacramento.

Will she miss it?

It’s probably safe to say the vast majority of people in Mariposa County will miss her, as well.

One response to “Rising to the occasion”