Relay for Life is canceled, but the battle continuesFree Access 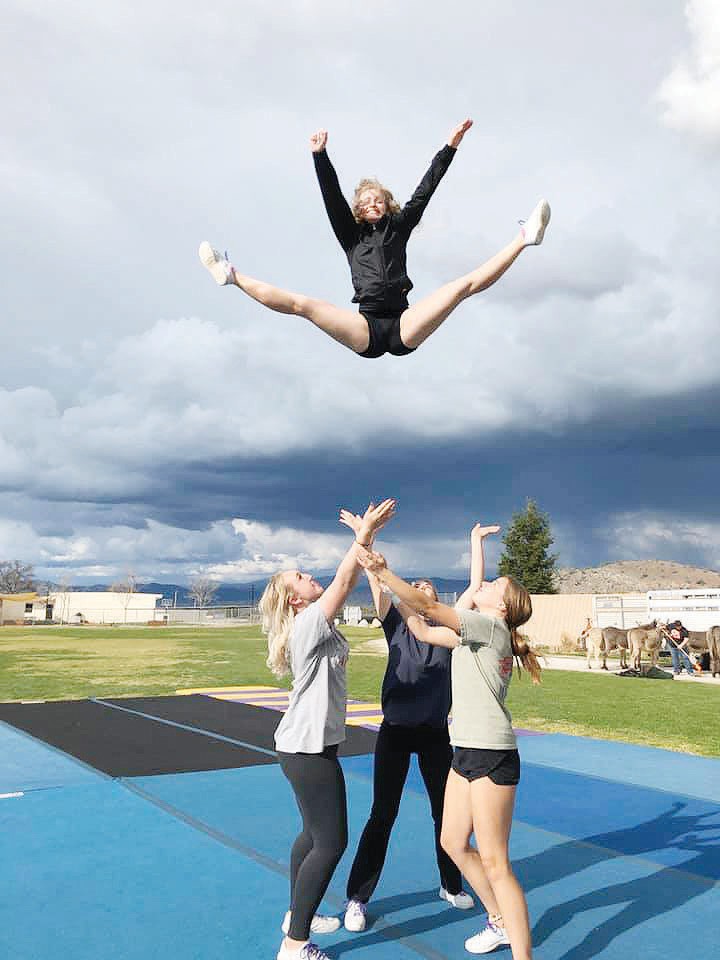 Minarets Mustang cheerleaders rise above the limitations set by the new restrictions around the pandemic and raise money virtually. Shown are Maegen Redman at left, Chloe Burcham at right, Kylee Best in the backspot and flyer MacKenzie Pogue. Photo by Cait Flanagan

Cancer never sleeps, but its fundraising efforts may have taken a backseat to the new coronavirus, COVID-19.

Just as teams were ramping up preparations for Relay for Life: Sierra Mountain Communities for a Cure, news began to break about the fast-moving viral illness that has put public events on hold for the time being and placed the nation — even world — on alert.

Originally scheduled to take place at Minarets High School in O’Neals later this month, “Relay” is a community based, grass roots event for the American Cancer Society (ACS) and related institutions.

“As we continue to manage through the current COVID-19 situation, it is important we all remain calm,” the American Cancer Society advised in a statement circulated on Friday, March 13.

“We must make informed and practical decisions that keep our constituents safe with minimal disruption to our events and work,” the ACS continued. “We know that cancer does not stop, so it is our responsibility to continue to fuel our mission during this challenging time — cancer patients and their families are counting on us.” 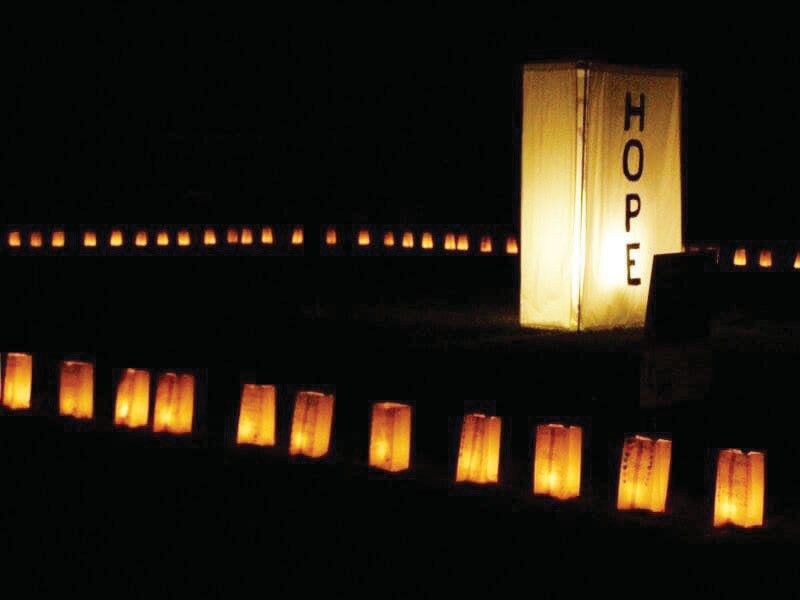 The Luminaria Ceremony is one of the most special moments at Relay as the track is illuminated by glowsticks placed in bags decorated in remembers of those who have fought cancer. Photo courtesy Mariposa for a Cure

In hearing the news, organizers and would-be participants were saddened by the need to cancel or postpone the event, but understanding of the reasons behind the action.

“I am very disappointed that we are having to cancel, because there is nothing like the energy of the live Relay event, the beauty of the Luminaria ceremony, and the connections made between the survivors, caregivers, volunteers, families, friends and community,” shared longtime Relay volunteer Linda Gott-Maddox, a member of the 20-plus person Insomniacs team.

“On the other hand, the possibility of exposing anyone with a weakened immune system to COVID-19, especially our cancer survivors, is unthinkable. So, it will give us a chance to Relay in a new and unique way.”

Anyone who wishes to make a donation may still do so, as ACS and the mountain communities are waging a virtual campaign to replace lost funding. 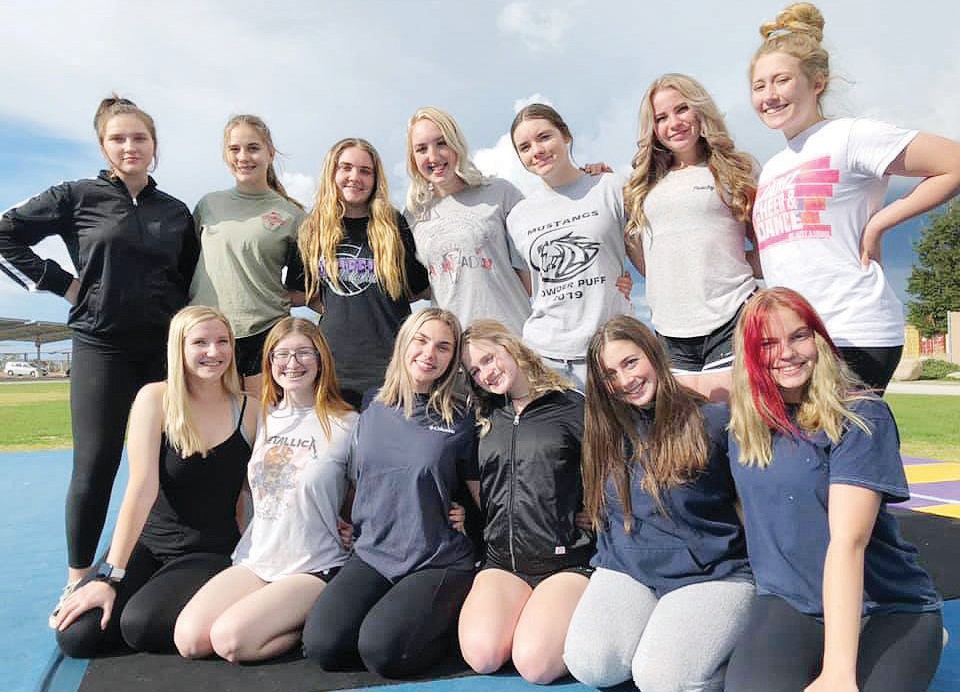 “This is a hiccup in how we have always done things,” said Insomniacs team captain Amanda Martin, who does Relay with her kids as well as friends. “Our continuance as a team is strong and together we will keep fighting cancer.”

The long-held area tradition of Relay for Life — nearly shelved a few years ago for lack of adequate participation — was in the midst of a popular resurgence, in the process raising spirits along with tens of thousands of dollars for critical cancer research when the pandemic was declared.

The reason for the recent uptick in local Relay’s popularity seems to have been its re-location to Minarets High School after having been at schools in Oakhurst and Ahwahnee for years. The Mustang family has breathed new life into the once-threatened fundraiser. Now, even while the event is postponed indefinitely, the cause it supports remains in need of funding for cancer research. 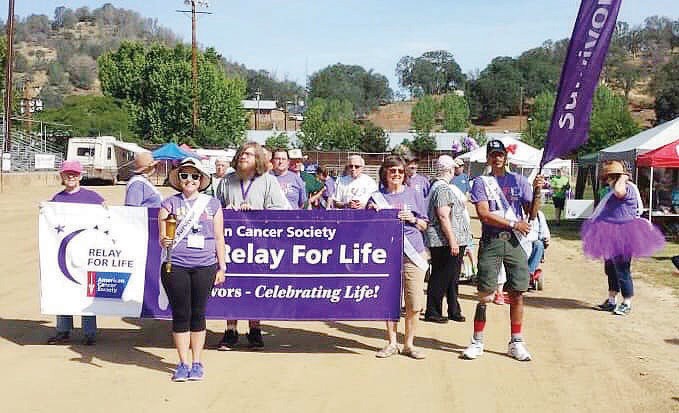 Relay for Life team members from Mariposa strut their stuff in this file photo. The team was ready to come to O’Neals before the event was postponed due to concerns over the new coronavirus. Photo courtesy Mariposa for a Cure

“Most people will have someone in their life touched by cancer,” noted Minarets senior Maegen Redman, who is a co-captain of the Mustang varsity cheer squad. “If we can come together as a community to raise money, remember those who have fought and honor those who have lost, we can make small differences in almost everyone’s lives.”

Together with Kylee Best, Redman is also co-captain of the cheerleaders’ Re- lay for Life team. Relay is a school-wide event with clubs and classes chipping in to help. The cheerleaders were set to operate an expanded Kids Zone at the free event where the team also planned to lead a charge for breast cancer awareness at their now-scrapped educational booth, one of many that would have been on display during the marathon.

Relay or no Relay, most of the individuals on the Minarets team have witnessed a loved one receive a cancer diagnosis.

Before the cancellation, attendees of the family-friendly happening would find the set-up to include music and entertainment, games and prizes, food and fun. Teams “complete” for fundraising dollars, while theoretically keeping one member walking the track at all times throughout the occasion, even in the wee hours. The overarching motto is, “Cancer Never Sleeps, So Neither Do We.” Hence, the term “Relay for Life.”

Typically, more than 5,000 Relays take place each year in over 20 countries with a mission to improve cancer survival, decrease the incidence of the disease, and improve the quality of life for patients and their caretakers.

“Personally, I have had family members both survive and pass away from cancer,” Redman continued. “Most recently my grandmother was diagnosed for the second time with breast cancer. She has gone through multiple surgeries but is recovering strong.”

Cheering on Redman’s grandmother and others is just one of the extra-curricular functions the Mustang team competes during the course of a year.

“Cheer participates in many activities in the community with a very busy schedule,” explained Redman, whose mom Ashley Redman is the team’s coach. “In the past, we have volunteered at the Coarsegold Rodeo and the Coarsegold Stampede, helping at the North Fork jamboree and being in the North Fork jamboree parade, as well as volunteering at the Evangel Home during the holidays to make cookies and crafts.”

Beyond that, the dedicated group practices for at least six hours a week and roots for basketball and football. They also recently completed a successful season in competition. Yet, here they were, getting ready for a Relay that wouldn’t be — at least this month.

“We, as a team, got involved with the Relay for Life due to my mom and I,” the younger Redman recounted. “We have been involved in multiple Relays including Fresno and Oakhurst for over 17 years with my aunts and grandmothers. It has been something we looked forward to every year and this will be my third year being a team captain.”

The goal this year, still, is to raise $100 per team member. Redman expressed that it’s important for the team to participate in community events like Relay because, “as teenagers we have to be taught to give back where we can. Our experience last year was a blast! It was very touching and we enjoyed the bonding aspect of it as well.”

Once purported to be one of the most giving areas when it comes to the ACS annual fundraiser, Eastern Madera County’s Relay for Life had suffered in recent years from a lack of participation equal to earlier times. And not just Madera County fell short on goals in the years following the national recession — Mariposa’s Relay had all but disbanded when individual groups within the organization refused to give up, determined to be at the mountain communities’ event before it was temporarily shelved.

Last year, some $44,000 was raised through the Relay event held at Minarets. Individuals working as teams have a huge impact on the bottom line. Linda Gott-Maddox estimates that the Insomniacs, for instance, have raised more than $25,000 over the years, walking tracks from Ahwahnee to Oakhurst to O’Neals.

“You really can’t know what a Relay is like unless you actually experience the power of it. The original idea was to have somebody on the field walk for 24 hours,” Gott-Maddox recounted.

“It doesn’t have to be one person, but the whole idea of a team is that you have somebody on the field at all times because ‘Cancer Never Sleeps’ so neither do we. And that’s why we named the team The Insomniacs.”

The live event always includes a touching luminaria ceremony, typically at sunset, where sand-filled paper bags filled with glow sticks line the track. Each bag is dedicated in memory of a survivor or someone who has died from cancer, and the soft illumination fills the field with a special ambiance as people walk in whispers.

“It is just amazing because you are forced to focus on how many people are affected by it and, luckily, there are more and more people who are surviving. But also, almost every day, you hear of somebody who has just been diagnosed. And it’s crazy.”

Fundraising does not stop

Following a night spent in tents where just a few would be seen walking in the wee hours, there’s free Survivors Breakfast sponsored by Sierra Oakhurst Kiwanis.

“Just that one day, the connections that they can make with other people who have had cancer or who support them. It’s really very important and very touching to see. The fact that they have so many people who are loving them and supporting them through this or acknowledging that they have gone through this and they are thankfully on the other side or who are grieving with other people whose family or friends have not survived – it’s very powerful.”

While an in-person Relay was ultimately not in the cards right now, the community still has an opportunity to participate in some of the fun and fundraising when the Bucket Sale takes place at Bryant’s True Value in Oakhurst on Friday, March 20 through Sunday, March 22. Participants in the True Value Bucket Sale get a special free five-gallon bucket and anything that can fit inside is 20 percent off, with some restrictions, after a $5 donation to Relay for Life.

UPDATE 3/19/2020: The Relay for Life True Value Bucket Sale originally scheduled for Mar. 20 – 22 has been postponed to a later, as-yet-undetermined date.

Another way the community can help out is to visit the Relay for Life: Mountain Communities for a Cure page on the American Cancer Society website, where you can see a list of all the teams raising money in this area, from the Insomniacs to Mariposa Fighting for a Cure, Minarets Key Club, Rotary, Kiwanis, Walking Warriors, the Skywalkers, Mountain Mommas and more.

For Minarets cheerleader Maegen Redman, a senior this year, the opportunity to raise money for cancer research is one not to be missed. And while she’s disappointed that there won’t be a Relay this month, she’s confident that the eventual return to normal in our area will include a live event.

“I think the tradition of Relay at Minarets should absolutely continue. Our Relay is the only one throughout our mountain communities. We only hope it can grow bigger in the future with more and more involvement in order to raise more money for ACS,” she said.