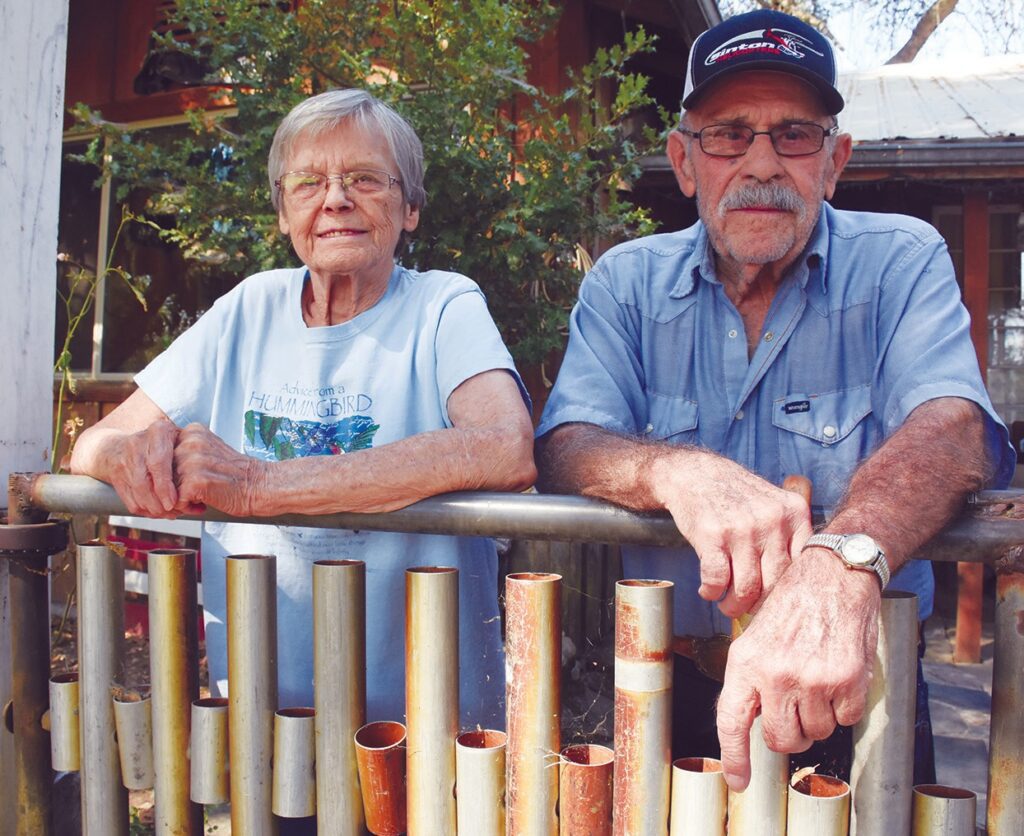 Duane “Bo” and Joann (Williams) Beaudoin pose for a portrait outside their Bootjack home last Friday. The couple will serve as the grand marshals of the annual Lions Club Labor Day Parade on Saturday. Photo by Allen Laman

The past 65 years the Mariposa County Fair has been held, Duane “Bo” and Joann (Williams) Beaudoin could be found in the same place, doing the same thing: relaxing at the fairgrounds and catching up with old friends.

Fairgoers will see them in a new place this year. Bo and Joann will ride in the grand marshals’ car during the annual Lions Club Labor Day Parade on Saturday.

“I think it’s honoring my ancestors that were here,” Joann said of the distinction, later adding that, “to me, it’s an honor to represent the ancestors.”

Joann is a fifth-generation Mariposa County resident. Bo was born in Walhalla, N.D. After being discharged from the U.S. Marine Corps in 1954, Bo moved to the San Francisco Bay Area.

His cousin talked him into working at a Mariposa County tungsten mine, and not long after arriving in the area, Bo and Joann met each other during a Bootjack dance party.

“I thought, ‘That’s the most beautiful woman in the world,’” Bo said while speaking about the first time he saw Joann. The couple wed shortly after and raised two boys, David and Randy.

Joann’s community involvement ramped up as her kids aged. She spent time as a classroom mother for eight years and also served as a leader in 4-H and Cub Scouts. Other titles she’s held include Parent-Teacher Association president and little league volunteer. Before the pandemic began, she donated time to the Mariposa County Senior Center.

“It’s been awesome watching them (grow up),” Joann said of her boys. “Some of the problems they went through and everything, and how they came out of it.”

Raising them here — Bo called Mariposa and Bootjack “God’s country” — has been fulfilling. David and Randy have given their parents a total of nine grandchildren, leading to 18 great-grandchildren. Joann has a sister and brother who live in Mariposa.

Both Bo and Joann believe Mariposa County has shaped them into the people they are today. After working in the mine, Bo became an equipment operator and built local roads and dams.

“And I think that made a difference on my life,” Bo said. “It’s something I enjoyed. Where, if I hadn’t have been in Mariposa, I don’t know what I’d have been doing. I might’ve been an outlaw or something.”

He later added: “I loved doing what I was doing.”

Joann was a teacher’s aid for 22 years at Woodland Elementary School. She also worked as the librarian and completed yard duties. That work filled Joann with fulfillment, too.

The Beaudoins look forward to the Mariposa County Fair each year. Last summer, after it was announced that the fair would be canceled due to Covid-19, Joann considered waving at Highway 140 traffic in town with her niece and nephew to simulate the cheer shared during the parade.

She didn’t end up doing it.

But you can tell how much the fair means to her.

“It represents the whole town of Mariposa, I believe,” Joann said of the annual event, which is often called a homecoming.

Added Bo: “Everybody meets. You have friends at the fair that you don’t see all year long, or that you haven’t seen in 10, 15 years.”

The Lions Club Labor Day Parade is set to begin at 11 a.m. on Saturday. This year’s fair is set to run from Friday through Monday. A full schedule of fair events can be found at MariposaFair.com.