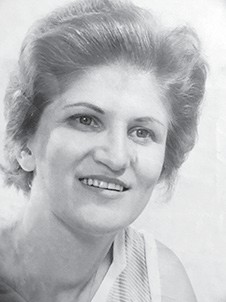 She was born on Aug. 28, 1935, in Donji Lapac, Yugoslavia, to Lazo and Sava (Raseta) Mileusnic. She was the youngest of four children and survived an outbreak of Typhus in her hometown thanks to her mother bathing the children in Serbian Moonshine/”Rakija”. During World War II, her family evaded the Nazis by hiding in the forest on the mountain Kuk.

“Rada” emigrated with her mother to Sacramento, Calif., in 1956 and proudly became a U.S. citizen. Rada’s oldest brother, Djordje (George) Mileusnic, sadly passed away one week before Rada. She was also preceded in death by a brother, Andrija; sister, Vida; parents Lazo and Sava; and niece, Andrijana.

Rada completed her education in domestic studies in Yugoslavia and became and worked as a dental assistant in Sacramento. She met the love of her life, Marko Vreca, at a Serbian Orthodox church dance in San Francisco and after two proposals the two married in 1965 and had one daughter, Vida (Vreca-Ponnequin). Rada also worked in the Silicon

Valley as an electronics technician prior to moving back to Sacramento.

Marko passed away in 1979 and Rada never remarried. She worked tirelessly as a widow putting her daughter, Vida, through UC Davis in order to give her a better life. Rada worked as a shuttle bus driver and executive housekeeper after Marko’s death.

Rada primarily resided in Sacramento and then lived with her daughter, Vida, and son-in-law, Craig Ponnequin, in Mariposa County with their many ranch animals.

Rada enjoyed gardening, home projects and animals. Additionally, she was a member of the Order of Eastern Star in Sacramento. Rada was so proud of her roses, vegetable garden and fruit trees. She had a green thumb which was apparent when visualizing the health of her yard and any potted plants she touched. She did not mind hard work and enjoyed being outside working in the yard, observing nature and animal behaviors.

A small private service for family and close friends will be held. In lieu of flowers, the family requests that donations be made in memory of Radmila Vreca to: St. Sava Serbian Orthodox Church, P.O. Box 1243, Jackson, CA 95642. Condolences may be sent to the family by visiting www.danerimortuary.com.