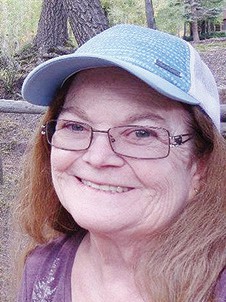 Patricia Ellen Perry was born June 23, 1950 in Richmond, Calif., to Paul and Olive Myers and passed away in Mariposa on Nov. 29, 2020. She was the third oldest of eight children, all of whom attended Saint Paul’s Catholic Elementary School in the Bay Area.

After graduating high school and working in San Francisco, she found herself in 1973 in her VW van with all her worldly possessions driving to Yosemite Valley to work, live, play and fall in love. There she met the love of her life, Bill Perry, in 1974 and they were engaged after a two-month courtship; they married the next year at the Chapel in Yosemite Valley and began a family two years later.

Patricia worked for Yosemite Park & Curry Co., Parkline restaurant in El Portal, Yosemite Institute and retired from the Mariposa School District. She enjoyed beading jewelry and even ran her own business for a time.

Patricia and Bill proudly raised their family in the mountains and community of Mariposa and Yosemite. Patricia loved a good party with dancing and was happiest at large gatherings of family and friends. She always welcomed all to her home as if they were family with the greetings: “The more the merrier” and “You snooze you lose!” In addition to being rooted in Mariposa, she enjoyed traveling to Alaska and more recently Ireland and Scotland.

She proudly served with Soroptimist International of Mariposa and lived by their motto of “Empowering women and girls to live their dreams!” By working to support the community and in bringing people together and making them feel loved and included, she deeply touched far more lives than she knew.

Patricia was preceded in death by her husband, Bill.

She is survived by her sons Nathan (Kari) and Ben (Sarah); grandchildren, Rylee, Jace, and Olivia; and her brothers and sisters, Mary, Margaret ( John), Charles, Paul (Susan), Kathryn (David), John (Linda) and Gerald.

A service will be held when it is safe to gather. Please feel free to donate to the Soroptimist International Mariposa in lieu of flowers.