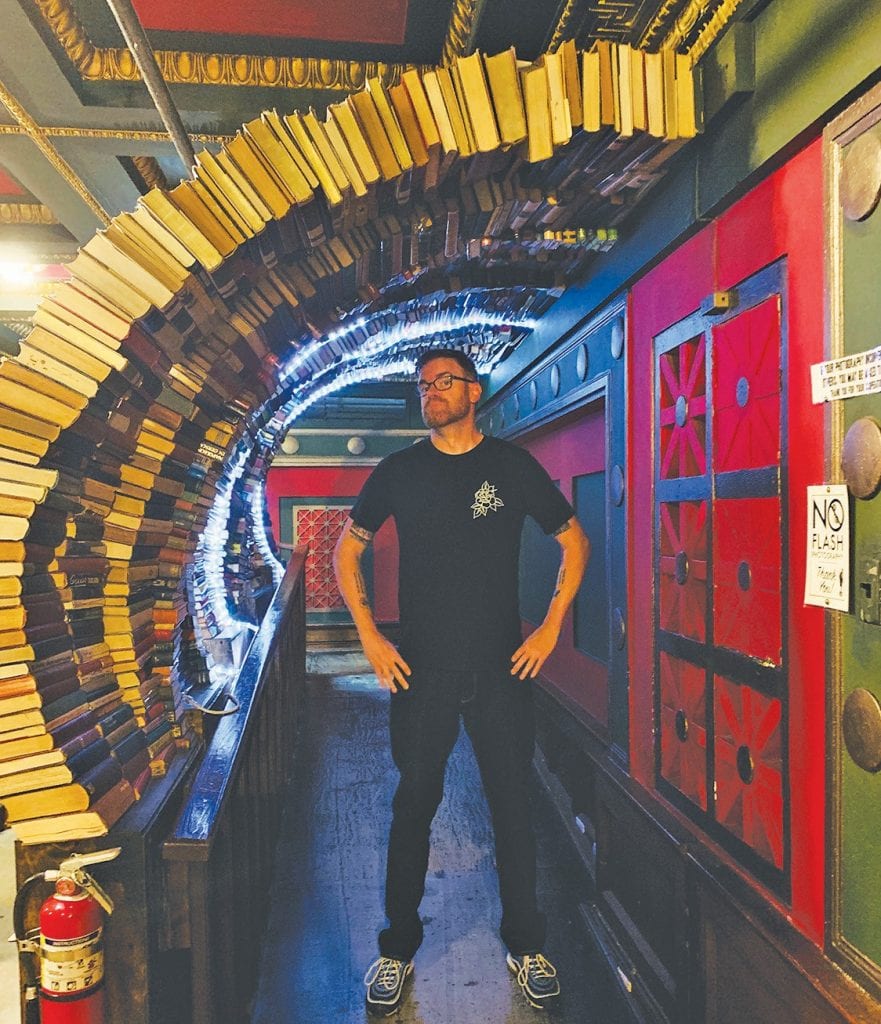 Avid reader Bryan Starchman is shown at The Last Bookstore in Los Angeles.

Editor’s note: Bryan Starchman is an English and drama teacher at Mariposa County High School. He was taking a sabbatical to go on an adventure across the United States. He was writing regular columns about his adventure and was planning to publish a book based on his experience. Due to the Covid-19 pandemic, Starchman has returned to California (more articles on that later) and is safely sheltered in place in San Francisco. The Gazette has asked Starchman to submit his final articles from the road up to and including his four day, 2,400 mile drive back to California after “shelter in place” orders were starting to be announced. Starchman said he could never imagine where we would be as a nation when he started writing the following back on March 17.

In the words of John Steinbeck, “Texas is a state of mind. Texas is an obsession. Above all, Texas is a nation in every sense of the word.”

And it felt like a nation. Eight-hundred miles from El Paso to Galveston and I drove it all in five days. I could’ve made it in two but I wanted to stop and look around a bit.

It was 7-1/2 hours between El Paso and San Antonio without any planned stops. But of course, I had to stop for coffee and gas and to answer nature’s call, but to keep myself entertained along the road I listen to audiobooks.

Over a year ago when I first planned this epic road trip, I decided to read a book for every state to get me inspired. But some states deserve more than one book. For California, I’ve read at least eight. For Texas, I’m up to four plus a lot of additional recommendations from my friends.

I followed Jack Kerouac down the Big Sur coast. Hunter S. Thompson took me through bat country and into Las Vegas, Nev. The haunting nonfiction book “The Devil’s Highway” led me up through Arizona. “When the Emperor was Divine,” about the Japanese internment camps, took me into Utah. Edward Abbey’s “Fire on the Mountain” guided me through New Mexico.

And now Cormac McCarthy was at the wheel, driving me through his terrifying version of Texas via “No Country for Old Men.” It was one heck of a way to see the Lone Star State, Friend-O.

I find that the more I listen to audiobooks, the more ideas I have as a writer.

And a lot of books have dictated what I want to see, and what I want to do. I got to shoot a German Luger in Las Vegas because that is the gun that George uses on Lennie at the end of John Steinbeck’s “Of Mice and Men.” (Do I still need to say “spoiler alert” for a book from 1937?) I’ve taught that book over 50 times in my career, sometimes reading the same chapter three times a day and now, I got to live a little piece of it. A very depressing, violent little piece of it, but still.

In Monroeville, Alabama I will visit the original courthouse from “To Kill a Mockingbird,” the film and book that encouraged my own father to become a lawyer.

As a kid, if someone couldn’t pay for my dad’s services, we would receive things like wind chimes or someone would deliver a cord of firewood. My father is a modern-day Atticus Finch. And like Atticus, a hero to his children.

In Salem, Mass., I will walk the same streets John Proctor and 19 others walked as they were led to the gallows because the crazy children were jangling the keys to the kingdom.

I am crisscrossing this country inspired by the authors that have come before me. And it is my humble desire that one day another writer will look back on my observations and be inspired to see this country for themselves.

And of course, I owe this all to John Steinbeck. He has inspired this entire trip. A crazy, four-month and 16,000 mile trek. From Cannery Row to Sag Harbor where he set out in 1960 with his French poodle Charley to rediscover America.

You can check out my reading list at bryanstarchman.com/50-states-50-books