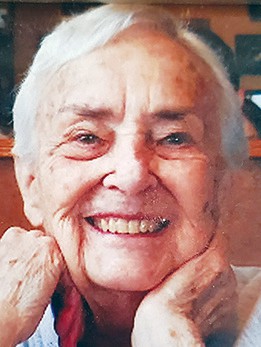 Moyna Mae Eldred was born on April 9, 1922 to Hattie and Jeff Tucker of Richland, Texas. She passed away Thursday, Dec. 17, 2020 at John C. Fremont Hospital.

Moyna Mae finished high school and two years in junior college in Decatur, Texas in 1942. She worked for North America Aviation plant in Grand Prairie, Texas until the end of World War II. After the war she moved with her parents to Ceres, Calif., in 1948.

She worked for Sears as a credit manager in Modesto, Calif. She met James Leroy Eldred through his sisters, and they were married in 1949.

In 1956 she and Leroy bought the Resort Area at Bagby in Mariposa County. After four years, they moved back to Modesto where they hand built their home. In 1964 they bought a small ranch in Hunters Valley, Mariposa County.

Roy died in 1990, and two years later Mae moved to Idle Wheels Senior Mobile Hom Park. She was on the board of directors for over 15 years and was president/ chairman during this time. She helped a lot of the residents with their yards and drove them to doctor appointments until she had some health problems.

Moyna Mae was baptized on Oct. 20, 1935 at the age of 13 years. She outlived her father, mother, brother and two sisters and several nieces and nephews. She was thankful for each beautiful day.

She is survived by her nephew Robert Ferguson and his wife Donna of Clovis, Calif.

At her request no services will be held. She attended Mariposa Church of Christ.