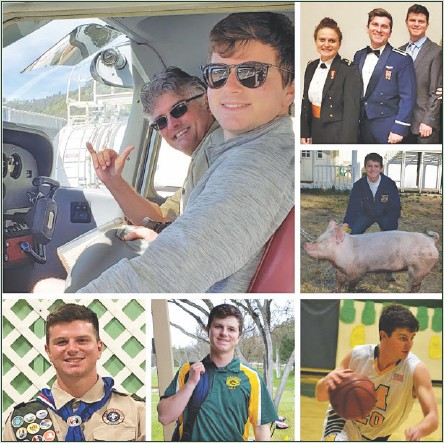 Another member of the Kelsey family will be joining the military.

Following in the footsteps of his older siblings, Seth Kelsey, who graduated from Mariposa County High School, will have his Induction Day (“I” Day) swearing in on June 25 to enter the U.S. Air Force Academy.

Kelsey was given a U.S. Air Force Academy Falcon foundation scholarship following high school. He attended the Northwestern Military Prep School in southern California. He also took a prescribed course load at Solano College as part of their requirements. This year, he fully enters the U.S. Air Force Academy as class of 2024.

Kelsey is a 2019 MCHS Valedictorian. He was involved in golf, baseball, soccer, basketball and band while at MCHS. He was also involved in Boys State and was a VFW Auxiliary member.

Kelsey earned his Boy Scout Eagle Scout rank in 2019. He is a CSF lifetime member.

The U.S. Air Force Academy is a public service academy. Founded in 1955, it adopted coeducation in 1976. It develops cadets by focusing on four broad areas or “pillars” of instruction: professional military training, academics, athletics and character development. The most important part of the program is the individual cadet’s commitment to hard work, individual and team achievement, development of leadership skills, unquestioned integrity and strong character. The demands are tough, the rewards are many, and completion means becoming an officer in the world’s most respected air and space force. Its 18,000-acre campus is located in Colorado Springs.