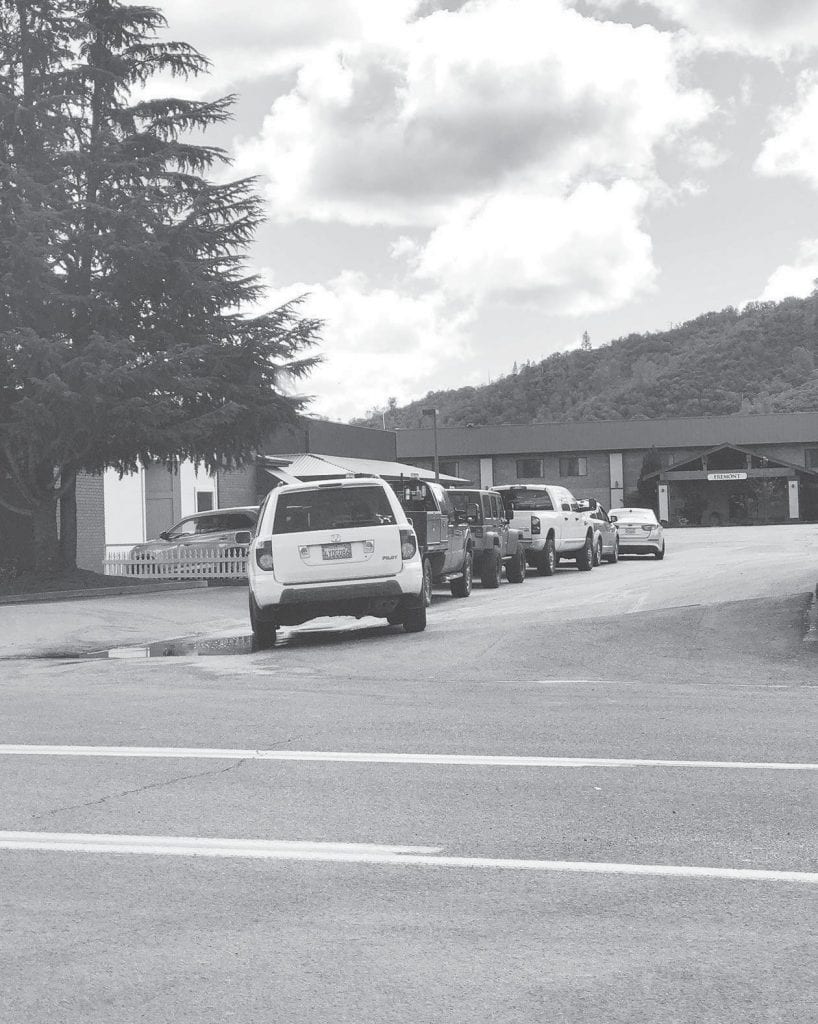 With the drive-through window as the main method for helping customers at Yosemite Bank, the lines are long, as shown in this photo from last Friday. Photo by Shantel Wight

To say society has changed drastically in the last couple of weeks would be an understatement.

The Covid-19 pandemic has swept across the world and even remote Mariposa County is not immune from the impacts.

Far from it, in fact.

With sweeping orders coming from California Gov. Gavin Newsom, and backed by federal officials, the economic impacts of the current “shelter at home” directive are immediate and could be devastating.

Around the world, one of the hardest hit sectors of the economy has been travel and tourism. For Mariposa County, tourism is the economic backbone of the local economy and it has fallen off to almost nothing.

Yosemite National Park has closed and parking lots at local hotels are nearly empty. That means many people, including housekeeping and front desk personnel, are now out of a job.

Restaurants, for the most part, are only offering take out options, meaning a majority of the employees are now on the unemployment rolls.

It’s unclear what the impact has been on vacation rentals in the county, but it’s probably safe to say people are taking economic hits because of the widespread cancellations that are ravaging that industry around the globe.

And the biggest issue may be what the future holds. Nobody has a handle on when the virus may be brought under control and the messages coming out of Washington, D.C., are anything but clear.

The impacts to small businesses in Mariposa County, and around the nation, could be devastating.

“This is devastating for businesses,” said Scott Fiester, executive director of the Mariposa County Chamber of Commerce. “The future is kind of unknown. How fast do we go back to work? How fast are we going to be getting people back here? We just don’t know.”

The chamber also operates the visitors center in Mariposa and, under normal circumstances, they see massive amounts of people heading to Yosemite.

“Our lodging industry is getting massive cancellations,” said Fiester. “Everyone I have talked to is almost wide open in the month of April.”

Fiester said that alone has “tons of implications” for this region.

The obvious one is the loss of work for so many service industry employees.

In addition, Mariposa County government relies heavily on transient occupancy taxes and those are drying up as quickly as the cancellations.

“We are aware people are being laid off and the unemployment rate is skyrocketing,” said Fiester.

Because of that, he said chamber officials are working on ways to help guide people through the unemployment system and help them with other issues related to losing a job.

“We are trying to be as resourceful as possible and we know there is going to be a hit right now,” said Fiester.

He also said the chamber has available a working chart about what businesses are open and some of the services they are providing. It is available at mariposachamber.org.

“We know it is incomplete,” said Fiester on Monday afternoon.

However, he felt it was important to get as much information out as possible.

The sheet outlines issues like which restaurants are offering pickup, what stores are open and the hours of operation and much more.

Fiester said it is broken into various categories.

He also said anyone who has an addition or changes to the list can email him at Scott@mariposachamber.org or call (209) 966- 2456.

Fiester did say since the shelter at home order went into effect, he is seeing “that businesses are starting to innovate. They are finding a way to keep their business running.”

Once everything gets back to normal, and nobody knows when that might be, Fiester said this might provide an opportunities for businesses to continue that innovation.

For instance, there might be room for more food deliveries in the county or other ways businesses can expand on their traditional services.