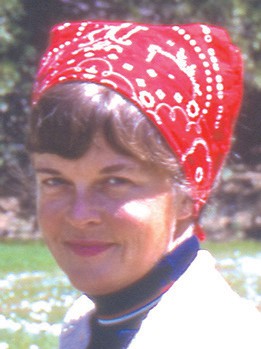 Marian was born in San Francisco to Anna and Arvin Polhemus and grew up in the San Ramon Valley, which Marian remembers as “really country.”

After high school at San Ramon Valley High and the Anna Head School for Girls, Marian followed the path laid by her mother, father and brother, Joe, to U.C. Berkeley. She said, “There was never any thought of even applying elsewhere.” Marian pledged with Kappa Alpha Theta sorority, where she made many lifelong friends.

Graduating with a degree in medical technology, Marian landed a job at U.C. San Francisco. A friend introduced her to Charlie Woessner, who was just finishing dental school. They married in 1951 and moved to Yosemite National Park, where Charlie took over the dental practice in Yosemite Valley.

They were warmly welcomed into the small community, one bursting with kids, and they soon contributed four of their own. There was much for a young family to do — picnicking at Tenaya Lake, Marian’s favorite place in the world, hiking park trails, skiing at Badger Pass, swimming in the Merced River.

When Charlie retired in 1987 they moved to the village of Wawona on the southern edge of Yosemite, then later to Carson City where their daughter Anne and her family lived. After retirement Charlie and Marian had adventures throughout the world — trekking in Nepal, sailing the coast of Turkey and wildlife watching in Tanzania.

Marian’s beloved husband, Charlie, passed away in 2013 and she moved to Sierra Place Senior Living in 2015.

Marian had a gift for friendship. A friend from high school, with whom she had kept in touch for over 70 years, wrote, “I think that the one thing she would like to be remembered for, besides being a wonderful Mom to all of you, is as a loyal friend to many, steadfast and true.”

To remember Marian with a gift, please consider donating to the Yosemite Conservancy yosemite.org/.