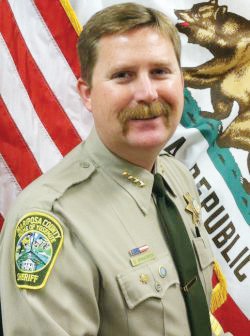 The sheriff of Mariposa County addressed a wide variety of issues during an hour and a half session this past Saturday morning.

Sheriff Doug Binnewies took questions during a forum hosted by the Mariposa County Democratic Cub which was open to the public.

One of the big topics discussed and the first question asked by club president Jaye Howes was about a military vehicle which was recently featured in a national story from The Guardian.

“I think people were surprised, little stunned,” said Howes. “Why do we have these and how do we make use of them?”

The story was about how Mariposa County acquired an armored vehicle about two years ago through a program that was re-instituted by President Donald Trump. Former President Barack Obama had ended the program, which allows local jurisdictions to obtain military-grade vehicles.

Binnewies said “for decades,” the federal government has allowed the “loaning of equipment” to local departments. He said the program has been in place for more than two decades.

The sheriff said his department first obtained a “Mumba” vehicle which is designed to give American soldiers “ballistic protection.”

The second vehicle, which was obtained in 2017, is an MRAP, he said.

“It is not a weapon,” said Binnewies.

He said there are no weapons on the vehicle, like guns, and it does not have the capability to launch anything like tear gas canisters.

“The two vehicles support our mission and protect them (deputies) from being shot,” said Binnewies.

The sheriff said the vehicles are used at “high risk” incidents where firearms could be involved.

He also pointed out their police vehicles are “regular cars,” and the vests officers wear protect them from pistol rounds but “not shotguns.”

The sheriff also said Mariposa County is a “rural community” and “most households have firearms.”

As an example, he said an incident could involve a husband who is intoxicated and assaulted his wife. In the example, he said the wife may have gotten out of the house and called the sheriff’s office, relaying information there are firearms in the residence.

Binnewies called those situations “highly dangerous” and could require the use of the military grade vehicles to protect the deputies.

Howes then asked how frequently the vehicles are used.

The sheriff said about six times a year, depending on situations.

“They are infrequent,” he said.

But he also pointed out the vehicles are used during parades, at day camps and even during Halloween, when they are on display for the children.

“We’ve let the community know we have them,” said Binnewies.

Howes then pressed the sheriff about where the vehicles are stored, if there is special training needed and if he had to go through the Mariposa County Board of Supervisors to obtain the vehicles.

Binnewies said it is not required to obtain approval from the board though it is required the board be made aware the sheriff’s office is getting the vehicles.

“I did that,” said Binnewies.

He said it “does cost money” to maintain the vehicles, but said it is “very little.”

The MRAP, he said, had to be “refurbished” when it was obtained and he added those officers who drive it do need to have a special endorsement, which they have.

As for storage, he said both are kept in a secure building at the county jail, located on Highway 49 North on the north edge of Mariposa.

“I hope to get one in north county,” said Binnewies, saying the hope is to get one of the existing vehicles located there.

The sheriff also said he believes the vehicles are part of the “tools necessary” for officers to do their jobs so they can “return safely” to their homes.

“I don’t agree with the push back of people who don’t want our officers safe,” said Binnewies.

Another topic brought up by Howes was Black Lives Matter, and the protests which have been happening for months.

She particularly talked about Portland, where she said there had been an “importation of federal troops” in “dubious uniforms” to make arrests.

Howes said the violence is limited to just a few people, but they get the attention.

“Any jurisdiction has the responsibility to protect their property and people,” said Binnewies.

Federal officials have said the troops were dispatched to protect federal property, though video has surfaced of them putting citizens into unmarked vehicles.

Howes also asked about the “defund the police” matter, which she said is actually an idea of “reallocation” of funding to address issues like domestic violence and drug abuse, but not eliminating police agencies.

“I understand what the original tone is and we support that,” said Binnewies.

He then went on to talk about “deescalation training,” saying Mariposa County was the first in the state to become certified.

Binnewies said he is “confident” the program has “been successful,” adding the local sheriff’s office has used it for “several years.”

The sheriff said his office has worked “hand in hand” with many local agencies in developing and implementing deescalation programs.

“It has saved lives,” said Binnewies, who is marking 30 years with the Mariposa County Sheriff’s Office, where he began as a deputy.

The sheriff also addressed that national situation and said he is concerned.

“The national tone is not good,” said Binnewies.

He did say “it’s obvious there are bad cops out there,” and it is his hope that can be addressed along with the many other issues concerning police agencies.

He was also asked about the makeup of his department, namely in racial and gender diversity terms.

“Public safety is just a slice of our community,” said Binnewies.

He said his undersheriff, Jeremy Briese, is Native American and he has captain who is Japanese and a Hispanic captain. He also said women are involved throughout the department, including at the jail, on patrol and in the detective unit.

One of the most controversial issues playing out right now in the county is about wearing face coverings in public, which is mandated by the state.

“Do you wear a mask in public?” asked Howes.

He called the mask regulations issued by the governor “interesting,” adding, “We are ultimately under a mask order.”

Binnewies said his deputies are also supposed to wear masks when in close proximity to others.

“It is very important for leadership to be role models,” said Howes.

She specifically pointed to Pioneer Market, where she said many people are not following the mask mandate.

“I don’t think they care if people wear a mask,” said Howes.

She also said Pioneer has likely “lost a lot of money” because people are choosing to shop elsewhere.

Howes also asked about fines for people who are not following the mandate.

“I feel continued education is the right direction to go now,” said Binnewies.

Binnewies did say his department has been “donning masks” since the order by the governor, but added fining people isn’t the target.

“We don’t want to ticket everyone,” said Binnewies.

He cited “education” and “peer pressure” as ways of “helping increase people masking up.”

“How are you educating the public that it’s important to wear a mask?” said Howes.

“I feel there has been an uptick in people wearing masks,” said Binnewies.

Anne Brock asked the sheriff if they have been reaching out to store owners about the importance of people wearing masks.

Binnewies said when his department or the health department get complaints, “we communicate and there’s a response.”

He also said the county health officer “does have authority to enforce” the mask mandates “on local businesses.”

“People who don’t want to wear masks aren’t going to get educated,” said resident Angela Heiss. “Can we get store owners to stop them from shopping? Is there a way to put pressure on the store owners?”

Binnewies said he thought Pioneer Market was “doing a pretty good job of enforcement” on the mask issue. But he did say he would “check with the health office” about the situation.

Howes also asked Binnewies if he would pen a column in the newspaper about the importance of wearing a mask and include a photo of him wearing a mask.

Binnewies said it is something he would think about, but did not give a definitive answer.

Another issue brought up was about gun laws.

Local resident Jill Harry asked Binnewies if he thinks some of the loopholes in the laws need to be changed in order to help keep guns out of the hands of people who might cause harm.

“I’m pro-gun ownership,” said Binnewies. “California has some of the strictest gun laws in the nation.”

He then asked out loud if those laws were helping in reducing crime involving guns.

“I don’t know,” he answered to his own question, adding, “Bad people do bad things.”

Another issue that surfaced was about how the local jail is handling the Covid-19 situation.

Jim Whelley asked how many prisoners are at the jail and if they have been tested.

Binnewies said the sheriff’s office, along with the probation department and district attorney, released many prisoners who they felt were “not a risk.” That was done in order to make more room in the jail in order to combat the pandemic.

Currently, he said there are 26 inmates in a jail that can hold up to 58 prisoners.

Binnewies said any incoming inmates are first quarantined for 14 days and all are tested. He also pointed out that being in jail naturally puts them into a “bubble. There are no inmates who have tested positive at this point.”

In another matter, resident Tom Devries asked the sheriff what the “main drug problem” is currently in Mariposa County.

Binnewies said meth use has seen an “uptick” in recent months and also said heroin and fentanyl are on the rise.

“This is concerning to us,” said the sheriff.

He also said drug use is a “catalyst” to a “majority of street crimes” like assault, domestic violence and thefts.

The sheriff also said because of the Covid-19 pandemic, the county coffers are running thin and he has six patrol deputy positions unfilled as well as two custodial deputy slots.

“This is a gut punch,” said Binnewies, citing the “fiscal emergency” which leads to “less staffing” even though “drug use has increased.”

The sheriff also said drug cartels continue to do illegal grows in the county and though they are raiding some, with less staffing, it is more difficult.

He also talked about a new craze called “Wasping.” He said people are combining meth with wasp spray which increases the high but is also dangerous, and can be lethal.

Toward the end of the meeting, Binnewies said he has worked hard to overcome the reputation the sheriff’s office once had when the county was featured in an ABC 20/20 episode that was anything but flattering and focused on corruption.

“It was horrific,” said Binnewies, who said he was not part of the department at that time. “They all still talk about it.”

He said once all of that happened, the department “built an outline of how to earn the trust of the community.”

Binnewies said two main issues came out of the discussion: “Be professional. Be transparent.”

The sheriff said he is “proud” to be “part of the team” that is the Mariposa County Sheriff’s Office.

“I feel the majority of the people in Mariposa County trust us,” said Binnewies.

To get to that, the sheriff said it was crucial “to keep our noses clean” and remain “very focused on the type of candidate we hire.”

Asked for any closing thoughts, the sheriff thanked the Democratic club for inviting him to speak and said it is his goal to be a “non-partisan office. I don’t like to see politics in law enforcement.”