Mariposa County’s Kira Hart has gone on to big things since graduating from MCHS. The story below details a major honor she received recently. She is shown moderating a Women in STEM panel discussion. Submitted photo

It was several years ago that Kira Hart’s high school teacher, Alex Keeton, told her she should study physics after high school.

“He said, ‘You love math, you’re good at it. You should do this,’” Hart recalls.

Hart did end up following that advice, and it has taken her places she never imagined.

Hart, 25, is a Ph.D student at the University of Arizona’s Wyant College of Optical Science.

It’s been a long road for Hart. The 2013 graduate of Mariposa County High School obtained her bachelors degree at UCLA in physics.

While she was there, she did some undergraduate research and realized she liked working on the instrumentation side of things.

“That means not so much looking through telescopes, but building them,” she said.

That led her to the University of Arizona, where as part of her graduate research, she has been working with The National Aeronautics and Space Administration (NASA).

In fact, she was recently named the recipient of a competitive NASA FINESST Fellowship in the Earth Science division. Her winning proposal was titled, “High-altitude balloon demonstration and observations with a novel LWIR spectropolarimeter for future CubeSat applications.” 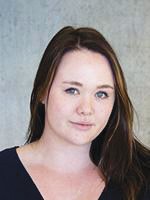 “Essentially what the award is, is a grant,” she said.

Over the course of three years, Hart will receive $135,000 for a project which contributes to NASA’s science, technology and exploration goals.

“I had to say how the research I wanted to do would impact that mission,” she said.

It gets a little murky when the average Joe tries to understand Hart’s work, but she broke it down like this:

Light has a color and intensity, but also a direction it oscillates.

“Essentially what my research does is it measures the direction the light is oscillating,” she said. “We’re trying to measure the size of ice crystals in clouds. The reason we care about this is it has implications for long-term climate models but also forecasting.” 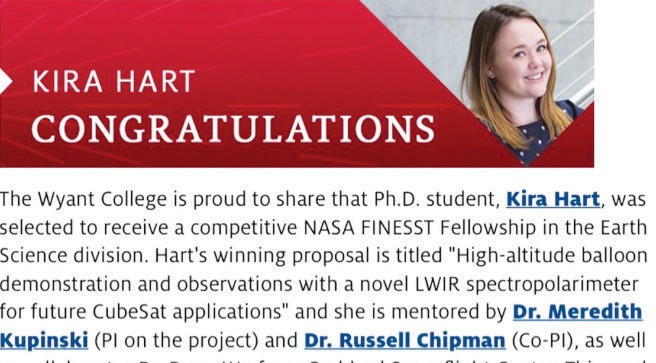 Shown is the news release from Arizona regarding Kira Hart. For more on Hart’s award, www.optics.arizona.edu/newsevents/news/quicknews/kira-hart-awarded-nasa-finesst-fellowship.

What Hart proposed doing is building a second instrument related to those studies.

“I’m receiving funding so we can put this instrument on a high altitude balloon,” she said.

Hart said she was surprised she received the award.

“It definitely was exciting,” she said. “I was shocked. I have a wonderful advisor, Dr. Meredith Kupinski, and she helped me write this proposal. The first thing I did was text her and ask if it was real.”

Hart said the average time required to obtain a degree for her type of work is six years.

“I have at least two more. It’s a long and trying journey, but I like what I do,” she said.

Hart isn’t exactly sure what her future holds after completing her Ph.D, but she plans to continue partnering with NASA.

“I think in the short-term, I want to pursue a NASA post-doc. Once I finish this degree, I would go to a NASA facility and work there for two or three years,” she explained.

In terms of long-term plans, Hart said she is weighing her options between teaching and research.

“I’m thinking of doing higher education and becoming a professor in the long-term. But I also enjoys the research aspect. How much time do I want to spend teaching versus research?” she said.

Regardless, she said, “I do definitely see myself continuing to do this kind of instrumentation work where we build the instruments that enable all types of scientists to do the science for the next generation.”

To achieve what Hart has achieved, it sometimes takes strong mentors.

Hart gave a lot of credit to her high school teachers from Mariposa.

“We have fantastic educators there,” she said.

“From that perspective, I’m not surprised (to achieve what I have achieved) because I definitely had some people who really encouraged me at the high school who advocated and pushed me,” she said.

Despite all of those mentors in Mariposa, Hart said it wasn’t easy transitioning to a large school such as UCLA, shortly after high school.

“I definitely think I had some deficits when it came to entering UCLA. There are kids who come from huge high schools and only take AP classes,” she said. “It’s culture shock when you leave Mariposa. One thing I would say is I think the support I got at the high school from specific educators was so important to me, and I have nothing but gratitude to them.”

Hart also offered up some advice to local students who may want to follow a similar path to hers.

“I continue to be inspired by reading some of the stories about valedictorians coming out of the high school now,” she said. “My only advice is not give up. When you leave Mariposa, things will get harder. You’re out in the world and not a small pond. I think if you just keep confidence in yourself and are willing to take a step back and try your hardest, it’ll be okay.”

Hart is the daughter of Carol Hart and Stephen Hart.