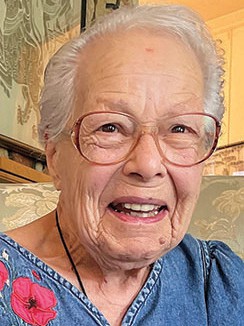 Lucille Apcar, an active member of Mariposa County, recently passed away at the age of 95. She was born on Jan. 1, 1926, in Yokohama, Japan, to Michael and Araxe Apcar.

In her book, Shibaraku, Memories of Japan 1926-1946, Lucille told of her extraordinary childhood. A descendant of a long line of Armenians, her ancestors ran a steamship company known as the Apcar Line that “plied the waters of the Indian Ocean and the South China Sea ending at the Port of Kobe, Japan.”

Lucille’s grandparents married in Rangoon, Burma, in 1889, and after a short stay there they settled in Kobe, Japan, and from there to Yokohama where they established an import-export business — A. M. Apcar & Co. The grandfather died young and Lucille’s grandmother, Diana, raised a family and ran the business until her son, Lucille’s father, was old enough to take over. During the “ethnic cleansing” of Armenians by the Ottoman Empire in the early 1900s, Diana welcomed refugees into her home and even purchased houses for them in the community. She was not only a humanitarian, but a diplomat, correspondent, and writer — a strong and independent woman — characteristics she passed down to her granddaughter, Lucille.

Lucille and her four siblings lived a comfortable life complete with servants, in a Victorian style home on a bluff over-looking the harbor.

Things began to change in the 1930s. Businesses suffered due to Japan’s growing hostility toward the west. Food and other commodities became scarce. In 1937, Lucille’s grandmother died and the family fortune “rapidly went downhill.” Servants were let go. Lucille’s aunts, who had immigrated to the U.S., wrote letters pleading the family to leave, but father refused to do so.

After the attack on Pearl Harbor, Lucille’s father was arrested, their home ransacked and valuables taken — some by their own staff. The Japanese government declared ownership of their home, although did not evict them at the time. Amidst all of this, Lucille’s 17-year-old sister died of diabetes. Her father remained in prison for 13 months experiencing torture and near starvation.

The Apcar family, along with other “westerners,” were forced to leave and relocate to the small, remote mountain community of Karuizawa. This was their home for two years where they suffered from inadequate housing, bitter cold, near starvation and ash from several eruptions of the nearby volcano.

When the war ended, they returned to Yokohama to find their home totally destroyed. Now 19, Lucille worked for the International Red Cross; then later did secretarial duties for a brigadier general. Finally, by the fall of 1946, the entire family was able to relocate to San Francisco to begin a new life.

Among Lucille’s many jobs over the years was that of an escort for tours, mostly to the Far East countries. In 1955, she founded Astra Travel Inc. in Menlo Park, California and operated it for more than 30 years. She also led travel tours of her native Japan and Asia.
She moved to Mariposa in 1989 after her tour company substituted her at the last minute as a guide to Yosemite — a place she had never visited. She researched, pulled it off and fell in love with the area. Once settled here, she contributed her tour guide expertise as a docent and volunteer for Mariposa Museum and History Center.

An accomplished writer, she was active in the late Marge Mueller’s Mariposa writing class and eventually led that group. In addition to Shibaraku, she published a biography about her remarkable grandmother. Her work was also featured in the book Inspiring Generations, 150 Years, 150 Stories in Yosemite published in 2014 by Yosemite Conservancy.

A granddaughter of Diana Agabeg Apcar, a noted Armenian writer and philanthropist, Lucille completed and published in 2004 one of her grandmother’s unfinished books, “From the Book of One Thousand Tales – Stories of Armenia and Its People, 1892 – 1922.”

Lucille was also a proud member of the Mariposa Democratic Club where she served on the scholarship committee for many years as well as the Democratic Central Committee as their secretary.

Lucille was an active member of the Mariposa Garden Club.

Her many letters to the editor will be sorely missed.

Lucille is predeceased by her parents, Michael and Araxe Apcar of Los Altos, brothers, Michael Jr. of Pleasanton, and Richard Alexander, of Sunnyvale, sisters, Katherine Berberian of Santa Cruz, and Dorothy Apcar, who died in Japan as a young woman.

Lucille is survived by nieces and nephews and their families: Leonard and his mother Gladys Miroyan Apcar, and Michael, Richard, Katherine and Margaret Berberian.

Lucille passed away from natural causes. Due to the Covid-19 pandemic, there will be no memorial service. Contributions to the Armenian International Women’s Association in honor of Lucille Apcar and Diana Agabeg Apcar (her grandmother) will be appreciated. To donate, email aiwasanfrancisco@gmail.com.