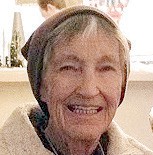 Laurali Campbell was born on Oct. 15, 1943 in San Francisco to Ester Grider-Richey and Herman Grider. Her adopted mother/aunt was Marie Anne Grider-Weber. She died in Roseville, Calif. on March 30, 2019.

She served in the United States Air Force and reserves for three years, was a care taker and independent Mariposa business owner for 16 years.

Laurali loved her family, friends, Mariposa and Yosemite, nature and our Savior Jesus Christ most of all.

Burial will be at Roseville Cemetery, on Thursday, April 25 at 1 p.m.