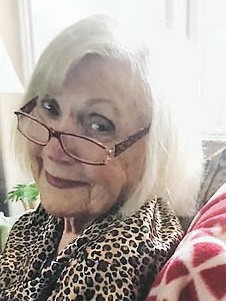 June Marlene Burke (Palmer, Vasterling, Inzerillo,) passed peacefully at home March 21, 2021, with her loving grandson Russell Vasterling by her side.

She was born Aug. 28, 1932, to Willard and Louise Palmer in Van Nuys, Calif. She was raised by her homemaker mother and father who was a contract “extra” for a major movie studio. She starred in a movie as a baby alongside Janet Gaynor and Charles Farrell in 1932 called “Tess of the Storm Country.” Her teenage years were filled with Hollywood type memories including friends like Debbie Reynolds and Vic Tayback.

Marlene married at 18 and started her family in Southern California as a homemaker. Over the years she began working at various jobs while raising a family. She lived in Kansas for a short while before settling in Cupertino during the Silicon Valley start up days, working on the assembly line at Intel for many years. She enjoyed spending time boating in the Sacramento delta, and served as the first female Commodore in California for the Caliente Island Yacht Club.

Over the years, she was fortunate enough to travel to many exciting destinations. She particularly loved England. Her last trip was taken with her daughter to St. Croix, visiting her grandson.

She enjoyed dogs, cats, gardening, bunco, exercising and volunteering. Her special love was to support the local SPCA and visiting their flea market. She also dedicated many years to volunteering at the Mariposa Museum and History Center and meeting tourists new to the area.

It goes without saying, her circle of friends were important to her.

She was preceded in death by her mother, father and a brother, Will Palmer.