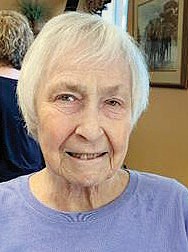 Jeri has gone to be with her Lord after a long battle with dementia and pneumonia. A long-time resident of Mariposa, Jeri spent many summers as a teenager in Mariposa with her aunt and uncle, Nan and Earl Fleming.

After marrying and having children and seeing them settled, she moved with her husband, Don, to Mariposa in 1982, where they built their dream home. She continued to work for many years for a firm in Long Beach, commuting back to Mariposa every Friday night. She then became office manager of Haztech Industries in Bootjack.

Her hobbies were movies, traveling/camping, travelogues, genealogy, walking her dog, Buttercup, and visiting with the “Porch Ladies.” Some of her most memorable trips were driving back to New York state with her beloved step-mother, Elsie, car camping in her Datsun 240Z, going to Hawaii and Israel with her church group and camping and fishing with her grandchildren.

She was an active member of the Church of Jesus Christ of the Latter-day Saints, volunteering in their genealogy library, teaching Sunday School and singing in the choir.

Jeri was preceded in death by her husband, Don; son, Jeff; and brother, Mike Fleming.

She is dearly missed by her daughters, Sheri Taylor and Denise Stehle; sister, Sandie Church; grandchildren Devin, Jason and Andrea; and all of her extended family members and friends.

“I’ve had a good life. I want to go where the others are.” And now she has.

Services will be at the Church of Jesus Christ of the Latter-day Saints in Mariposa and burial at the Mariposa Cemetery. The dates to be determined at a later date.