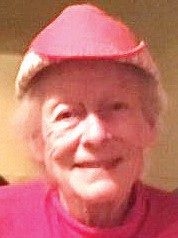 Jane Mills Sheldon, age 86, died peacefully at home on Aug. 8, 2020. Jane was a longtime resident and owner of Circle 9 Ranch in the Jerseydale area of Mariposa. Jane’s love of Jerseydale began at an early age, spending summers at her family ranch, horseback riding and swimming, taking pack trips to Yosemite and spending time with her family.

Originally a resident of Oakland,

Jane attended U.C. Davis where she studied husbandry. She then changed the course of her career and attended design school in Los Angeles. She began an exciting career with the design subsidiary Fluor Daniel, where she worked as a commercial interior designer in the LA area. Her work also propelled her across the country and the world, where she did design work for companies from New York to cities in Europe and Asia. Her travels also brought her to Africa and South America .

While in southern California, Jane was married to Robert Sheldon, who worked in television as a studio director. They lived in Studio City in the San Fernando Valley. Jane often spoke of his career in the Hollywood area and the amazing parties that they attended, where she encountered some of the stars from the Golden Age of Hollywood.

Upon her retirement, Jane returned to Mariposa and eventually returned to Jerseydale and Circle 9 Ranch. The next chapter in her life included many loves, including working on her gardens as a Master Gardener, playing bridge with friends, maintaining her orchard and selling apples, supporting Endurance Rides at her ranch and all of her devoted work in operating a cat rescue with her sister Jan and the Catnip Society. Jane’s love of animals was one of her defining characteristics, and she was very generous in her donations to animal rescue and conservation organizations.

She is survived by her sister, Jan Emerson Hamilton, her nieces and nephews and countless friends in the Mariposa and Jerseydale areas that loved her very much.

In lieu of flowers or condolences, please make any donations to the Catnip Society at catnipsociety.org.