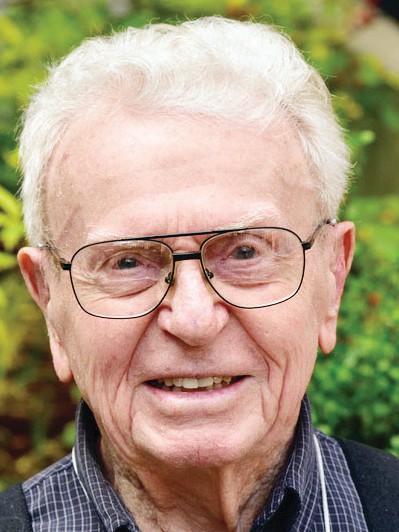 He was surrounded by his three daughters. Jack’s wife Ruth preceded him in death in June 2018. Jack was born in Prosser, Wash. on Nov. 2, 1918 to George and Jodie Wittkopf.

Jack’s family moved to Redmond, Ore., about the time he started school. It was in central Oregon that he started a love affair with the outdoors — camping, hiking, hunting and especially fishing. Jack had a lifelong passion for fishing, which was only exceeded by his love of his family.

Jack met Ruth, the love of his life, at Oregon State University (OSU). They enjoyed a devoted marriage for 76 years and fortunately, in Ruth he married another lover of the outdoors and fishing.

Jack majored in electrical engineering at OSU and graduated in 1943. His academic success was evidenced by his recruitment by Harvard University and the U.S. Department of Defense to join a team researching the use of radar and how to block it during World War II. He traveled to China and India as part of this effort. In 1945, Jack joined the OSU engineering faculty and taught electrical engineering classes until 1951. He received the “Outstanding Teacher of the Year” award in his last year of teaching.

In 1951, Jack was recruited into the aerospace industry in the Los Angeles area where he worked for the next 20 years, enjoying challenges and opportunities in the aerospace/aviation business world. An aviation company he worked for afforded him the opportunity to get his private pilot and helicopter licenses. He clocked hundreds of hours piloting planes for business and recreational trips. Eventually he purchased his own plane and flew to Alaska with Ruth and another couple for a fishing adventure — landing on sand bars and who knows what else!

In 1971, they moved to the Jerseydale area of Mariposa for the best 47 years of their lives. Jack and Ruth were active in their cedar home construction business, were members of the Bootjack Stompers Square Dancing Club and indulged their love of the mountains and forests and fishing. In addition, for 25 years they spent summers on Vancouver Island, Canada, fishing for salmon and making new friends from all over.

Jack lived a long, healthy and very wonderful life — over 100 years! He missed Ruth every day since her passing and his family likes to think they are fishing together again.

He is survived by his children Janie Brown, Peggy Harvey, Jim Wittkopf and Sandy Wittkopf-Amo, five grandchildren, seven great-grandchildren and one great-great-granddaughter.

A memorial will be held in Hood River, Ore., to celebrate Jack’s life.

One response to “Jack Wittkopf”