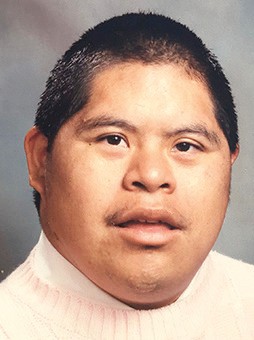 He was the fourth child to Jack and Morana Cheepo and was diagnosed with Down Syndrome at the time of his birth. Jack’s parents gave him his nickname, Luke. From his birth until the age of nine, he lived in North Fork with his family, an older brother and three sisters. Two older ones and one younger.

He grew up with Mr. and Mrs. Richard Smiley. They were his second parents and his new family. They took good care of raising him as if he was their own child.

After their passing he was in the care of the Kings Rehabilitation Program where he continued doing his daily activities. This is when he moved to Tulare County.

His family, the Smiley’s Boys Home, the King Rehabilitation Center and Jan and Gayle Oaks Home were as much his family as his relatives.

Luke you were loved very much and you will be missed by all who knew you. Continue watching the traffic here from on your swing up in those clouds.

He is survived by his sister, Karen Cornelison of Fresno; brother, Adrian Cheepo of Mariposa; Sadie and Darrell Jeff of Lemoore, Calif and June L. and Tom Eld of Mariposa; a niece, Gypsie McVicker of Michigan; nieces Rhonda Garfield and Raylene Jeff of Lemoore; nephew, Darrell Jeff, Jr. of Las Vegas, Nev.; niece, Marjorie Jeff of North Carolina; nephew, Joshua Cornelison of Ahwahnee, Calif,; nephew, Jack Jeff of Lemoore; nephews Adam Eld and Thomas Eld, both from Mariposa; his namesake, great-nephew Luke Garfield; 10 other great-nephews; 10 great-nieces, three great-greatnephews; and one great-great-niece. Although Luke wasn’t actually living with his family, he came from a family that loved him and visited when they could. He did get to meet many of his nephews and nieces.