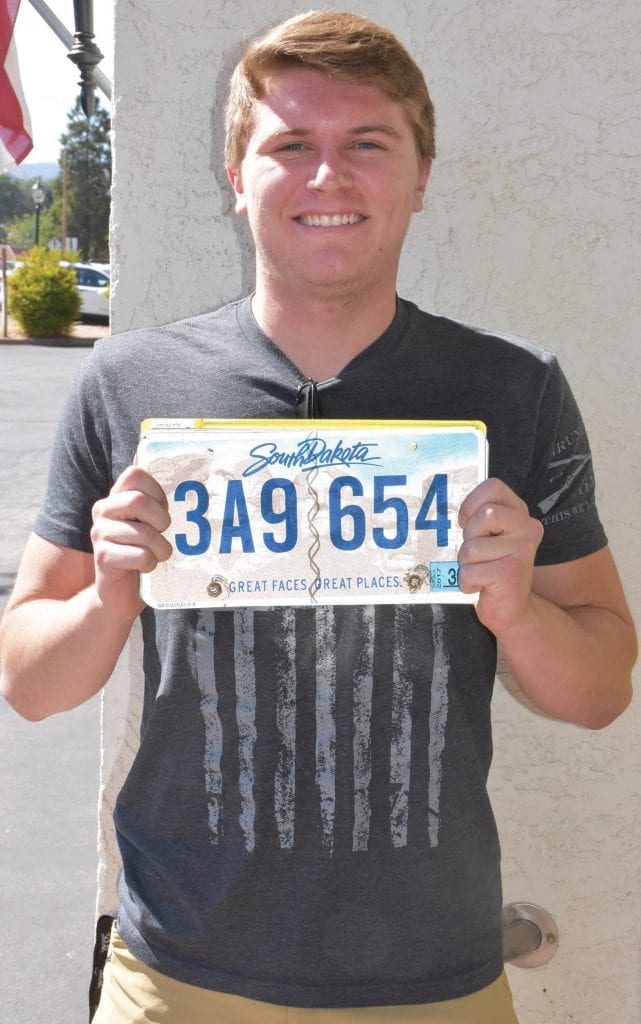 Avid license plate collector Phillip Kudela is shown with a rare license plate from a state that is often forgotten about: South Dakota. Photo by Matt Johnson

Kudela, 21, has been collecting plates from all 50 states for just over a year.

The marketing student who was born and raised in Mariposa now attends Western Illinois University, but was back home visiting family last week. He shared his collection with the Gazette.

Originally, Kudela was collecting road signs. But that developed into an interest in license plates.

“I wasn’t planning on a collection,” he said.

His first plate was a New York plate. Then it slowly became one state after another. Before he knew it, he now has 24 states and counting.

At the moment, he puts them up on the wall of his house at college.

“Eventually I started posting about it on Instagram and Snapchat. Anyone and everyone, far and wide, that I’ve known through my life, have reached out. Eventually, it just blew up,” Kudela said. “People move and change their license plates all the time. It’s not something you throw out. Most people, I would assume, keep them for whatever reason.”

He said he likes all plates, but especially unique plates, such as New Mexico. Alaska might be his favorite.

He also enjoys South Dakota’s plates, of which he has two variations.

“It’s one of the best ones. It’s very patriotic,” Kudela said, noting Mt. Rushmore in the background.

On the back of each plate, he writes who he got it from and what kind of vehicle it came off of.

“It’s cool to think where they’ve been,” Kudela said. “People love contributing. People just have them laying around in their garages.”

He said he has found a few of the harder-to-find states already, including Alaska and South Dakota.

“I’m happy I got Alaska. Hawaii is going to be a hard one to find. Rhode Island and Maine will probably be hard,” Kudela said.

Kudela said “it’s cool how fast this all came to be,” and said he will continue to search for plates.

“I’ll buy one if I find it at a thrift store, but I’m not going to just order them online,” Kudela explained.

Kudela said he is interested in obtaining plates, even if he already has a certain state’s plate. Those interested in helping Kudela can contact him at phillipkudela@gmail.com.