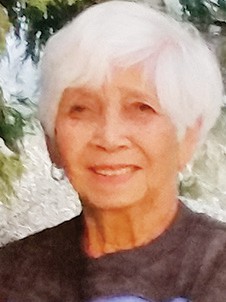 Ilse Keuning took her last earthly breath on Friday, Dec. 11, 2020, joining her sweetheart, whom she married 71 years ago.

Ilse, the daughter of Sophia Mathilda Wilhelmina (Godfried) and Adriaan Christiaan Siwy, was born on July 10, 1927, in Bandoeng, Indonesia. In 1948, she met the love of her life, Sietze (Sy), and they were married on Dec. 12, 1949. In late 1950, she and Sy left Indonesia to start a family in the Netherlands.

In 1959, with three kids in tow, they immigrated to the USA and settled in Southern California. In 1965, Ilse began working a swing shift (so that she would be with Mark during the day) for Mattel Toys, sewing hair onto Barbie doll heads. In the 1970s, McDonalds hired “moms” to work lunch hour shifts. She took the job and loved it, taking orders, making fries and working the grill. In the 1980s, she applied at the local school district to work in the central kitchen preparing school lunches. As the baker, she used a mixing machine that was bigger than she was. Her sister, Benny, worked there as well and after work each day, they stopped at the thrift store to find treasures before picking up their kids from school.

Sy and Ilse began a love affair with the outdoors and for decades camped and backpacked in the Sierra. Yosemite became one of their favorite places to visit. They loved introducing friends and relatives to the beauty of the Sierra and the joys of camping and backpacking. At age 60, Ilse still strapped on a full backpack and energetically took to the trails.

Looking ahead to retirement, Ilse and Sy wanted to be close to the Sierra, found property in Mariposa, built a house there, retired from their jobs and made it their permanent home in 1989. Over the next 20 years, they traveled extensively, made many friends, spent countless hours volunteering in the community and coordinated the SPICE program (Seniors Participating in Community Education).

As a member of the Church of Jesus Christ of Latter-day Saints, Ilse served in many capacities. She loved participating in talent nights with Sy, sharing their beautiful voices in song. Ilse was extremely creative and enjoyed many hobbies throughout her life — sewing, crafts, crocheting, scrapbooking, flower arranging, photography, oil painting, decorating and upholstering. She even built a “sunroom” addition with Sy.

After Sy’s death in 2009, Ilse moved to Concord, Calif., where she grieved deeply. She then continued to live an active life traveling, creating, gardening and, her favorite activity — shopping.

Ilse is survived by sisters, Eveline, Nieke and Benny, as well as her children, Barbara (Bill, deceased), Bart (DeeDee), John (Kimberly) and Mark (Theresa), 11 grandchildren and 28 great-grandchildren. The legacy she leaves is immense and she will be missed by family and friends alike.

A graveside service will be held at the Mariposa Cemetery on Friday, Dec. 18, 2020, and, because of the Covid-19 pandemic, it is limited to family.