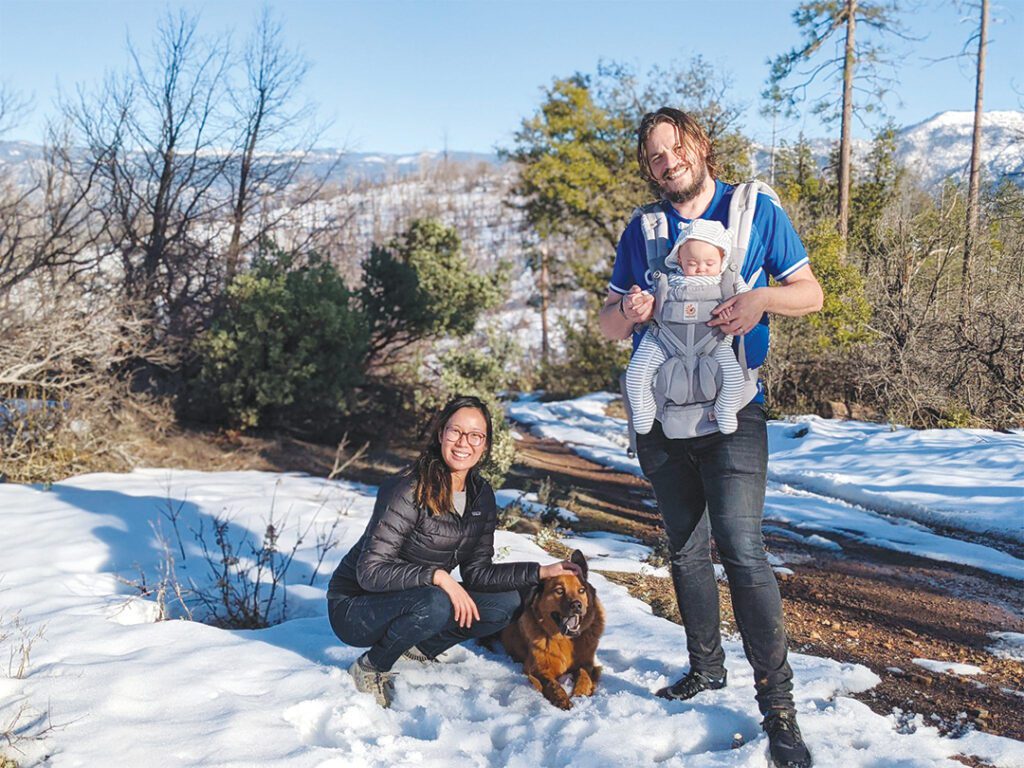 Submitted photo
Shown are family members Jonathan Gerrish, Ellen Chung, Miju and their dog, Oski, in a photo taken in the Jerseydale area.

After months of speculation, an official determination has been made about how three members of a local family died while hiking on a trail in the Jerseydale area.
Mariposa County Sheriff Jeremy Briese on Thursday called a press conference to announce the results of the lengthy investigation following the deaths on Aug. 17.
Jonathan Gerrish, 45, Ellen Chung, 31, and one-year-old Aurelia Miju Chung, were all found dead in the Devil’s Gulch area near the Southfork of the Merced River drainage. They were found dead on Aug. 17. Also found dead was the family’s dog, Oski, an eight-year-old Aussie Shepherd, who was found on the trail with the family. The family had just moved to Jerseydale, where they bought a home. That house is less than two miles from where their vehicle was located.
The cause of death was hyperthermia and possible dehydration, Briese said at a news conference held on Thursday afternoon at the government center in Mariposa.
Briese said a multitude of experts in various labs conducted toxicology reports from the family members. All, he said, came back with the same conclusions.
“This is extremely difficult to investigate,” said Briese.
The sheriff said the cause of death of the dog, an 8-year-old Aussie, was not determined but they think “heat-related issues” were a key factor.
The sheriff called this case “very unique,” especially in Mariposa County, where he added in his 20 years in law enforcement here, this is the first case of hyperthermia he has witnessed.
Here is the definition: “Hyperthermia is caused by the body’s inability to regulate its temperature in the presence of high environmental heat. Hyperthermia can be severe and dangerous in the case of heat stroke. Hyperthermia is a high body temperature.”
That is according to the website emedicinehealth.com.
The sheriff said on the day the family was hiking, the temperature reached as high as 109 degrees in the canyon where they were found dead. That was according to records from the National Oceanographic and Atmospheric Administration.
The family was hiking a trail that was approximately eight miles long. They were found 1.6 miles before the end of the trail on a steep uphill grade.
The elevation change during the hike goes from around 1,800 feet to around 3,800 feet.
The sheriff’s office said one 85 ounce container which held water was found with the bodies. There was just a trace amount of water in the bottle, he added.
He did say water from the area was tested for algae blooms, a condition that can form during hot summers, but there was “no evidence” any of the three people drank any of that water. He said six different areas were tested.
“We’re confident of our findings,” said Briese.
We will have a more detailed story about this case in the Oct. 28 edition of the Mariposa Gazette.