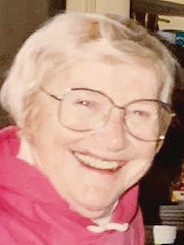 In the early morning hours of July 3, Helen Esther (Ryland) Saulman passed peacefully in her sleep. She was the oldest living resident of Mariposa, Calif. at a respectable 107 years of age.

She was born Dec. 30, 1912 to Richard Ryland (passed) and Cassie Clark (passed) in Sullivan, Ind. where she still has surviving nieces and nephews. She is survived by her five remaining children and a multitude of grand and great (etc.) grandchildren across the country.

Born in 1912, she survived epidemics, depressions, recessions, two world wars and two husbands. Having been born before cars were a common commodity, she was a farm girl who worked hard almost every day of her life.

She moved from Indiana to Los Angeles during World War II with her second husband, Elbert Saulman, and there they worked a nursery next to their home. Later they purchased land in Jerseydale where they set up a mine and befriended Clyde Foster, the last resident of the Sweetwater Mine.

They later purchased a small plot near the town of Mariposa where they moved with their two youngest children. In 1978 her husband passed and was buried at the historic St. Joseph’s church where she is expected to join him.

The funeral will be held on Friday, July 24 at 11:30 a.m. and the link to the stream will be posted to the Facebook pages of her granddaughters Christine Saulman and Constance DuBois. Flowers can be directed to the Mariposa Funeral Home in her name, and any monetary donations to help with expenses can be donated to her GoFundMe page.

Please direct questions to CDubois8242009@gmail.com. Any photographs or videos of her would be greatly appreciated as we are also working to put together a video memorial which will be posted to the same Facebook accounts.