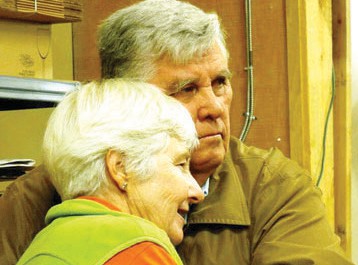 Harold is shown with his wife, Kris.

As a young boy, Harold moved with his family to Northern California where he spent the rest of his life.

Harold met his bride-to-be through his love of aviation while flying his Cessna. In 1973, Harold and Kris founded Casto Roofing where they operated a successful business until retirement in 2003.

After retirement, they relocated to Mariposa where they purchased a vineyard in their quest for a new challenge in life. Harold soon began to learn the discipline of viticulture and wine making. The wine Harold produced has won multiple national awards which helps put Mariposa on the map.

Harold was known by friends and family to be incredibly intelligent, warm hearted and wildly sarcastic. He was also known for his unique ability to create his own original words which his grandchildren referred to as “Grandponics.” He was famous for his ability to write an original song on cue. His generosity to those he loved and respected cannot be put into words.

Harold taught his family up to his last hour what courage and strength truly means. He was the rock of the Casto family. Holidays and family events will never be the same without him, but he will always be remembered fondly.

A picnic for Harold will be held Sunday, Sept. 8 at Casto Oaks Winery, 6947 Highway 49 North, Mariposa at 4 p.m. To make a contribution in honor of Harold’s memory, the Casto family asks you to donate “The Gift of Life” — blood, platelets or a financial donation to The Central California Blood Center. Another choice is a donation to the Mariposa Community Foundation earmarked for Vocational Arts at Mariposa County High School.

Harold’s love for Mariposa and the vineyard showed true. He would respond to anyone with, “Why would I want to go anywhere when I can live in the greatest place in the world?”