Final choice
may be made this week by school board 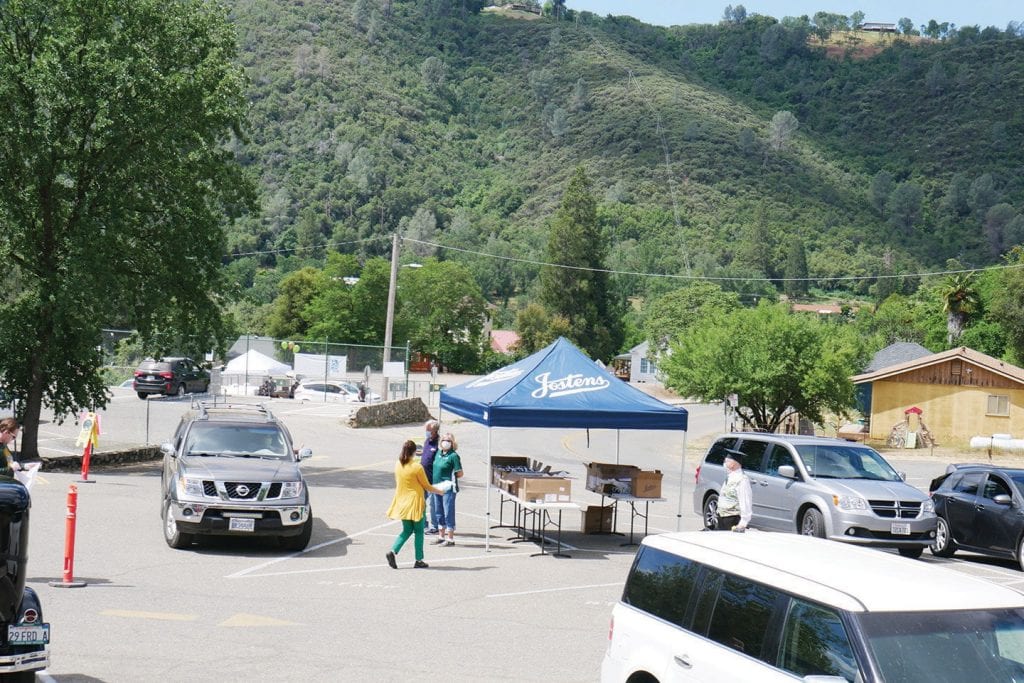 A bizarre scene This was the strange scene last week at Mariposa County High School, where graduation caps and gowns were handed out to the students. Because of the Covid-19 pandemic, students and parents were only allowed to remain in their vehicles while school officials placed the items in their vehicles. School officials are still working on exactly how to handle graduation for the MCHS Class of 2020. Photo by Nicole W. Little

One question which has been on the mind of many parents, students and other stakeholders in the county is what form graduation will take this summer for Mariposa County High School.

With the Covid-19 pandemic still a concern, school officials are discussing many options for how to handle graduation, which is one of the biggest events in any young student’s life — and the lives of their parents, who cherish the opportunity to watch their child walk the aisle to receive a diploma.

The graduation question was addressed in depth at the latest Mariposa County Unified School District board meeting, which was held via Zoom video conferencing on Thursday. A multitude of options were discussed.

“Staff has been working hard to provide a variety of different options for graduation and other ceremonies across our district,” said MCUSD Superintendent Jeff Aranguena. “This is going to be a tough decision on how we move forward as a team.”

Aranguena said district officials have been collabo- rating with the Mariposa County Health Officer, Dr. Eric Sergienko, and taking into consideration his input.

Mariposa County High School teachers Brian Moczygemba (left) and Josh Kraemer were among those helping hand out caps and gowns last week at the school. What will unfold over the next few weeks concerning MCHS remains to be seen. Photo by Nicole W. Little

Assistant Superintendent Drew Sylvia said the decision will likely hinge on what “stage” the county is under, in regards to the pandemic. Health officials have announced Mariposa County is currently in stage 2.5, which has loosened some of the social gathering restrictions during the pandemic — but there is still a ways to go before life is back to normal.

MCHS principal Celeste Azevedo spoke shortly after. She said she believes it is important to give students and parents options, because each family will want to do what it believes is safest and best for them.

“I think regardless of what stage we’re in, or which proposal we go with, that it’s important we give parents options,” said Azevedo. “I think it’s important also, from a liability and safety perspective of each unique student and family, that we offer them the option of mailing them a diploma, or if they would like us to arrange a one-on-one ceremony, or to participate in one of the three stage options.”

A handful of scenarios were discussed during the meeting.

“We have come up with multiple scenarios, that would fill into either Stage 1, Stage 2 or Stage 3,” said Azevedo.

The first option — which coincides with Stage 1 health orders — would be a virtual graduation.

“This would be if we are in a Stage 1, quarantining, shelter-in-place (situation),” Azevedo said.

This would consist of a senior highlight video, which is already being made.

Stage 2 would consist of “a drive-through” graduation. Azevedo said the school would set up a stage in the Gold Bowl at the Mariposa County Fairgrounds, and each family would be able to come in, one at a time, to honor their graduate briefly.

This format would consist of 50 participants at a time attending a ceremony. There are close to 100 graduates this year, so two ceremonies would need to be held, likely one right after the other.

The stage would be set up in the grandstands, and the rodeo/field area would be used by vehicles.

Each family would be able to have one vehicle, with up to 10 people in the vehicle. Those 10 people would not count against gathering numbers, as long as they stay in the vehicles.

School officials have looked into using an FM station to broadcast the ceremony over the radio. They are also considering projecting the ceremony onto a video screen.

Board member Kathy Chappell asked if the district was “considering” changing the date of graduation. The board discussed the possibility of pushing a graduation ceremony to July, in hopes that social distancing guidelines would be loosened by then, which is something school districts in the Fresno area are planning.

That doesn’t appear to be under serious consideration from MCUSD, but was mentioned as one possibility.

“Graduation seems like it should be right at the end of the school year. I can’t picture it in July or August,” said Chappell.

After the drive-in graduation option was discussed, the board also discussed potential liability issues.

The school district could be at risk of being liable if anyone becomes ill at the ceremony, according to district legal counsel. The district would also need to avoid violating state laws or health department regulations.

“I think one of the concerns is the liability,” said Aranguena. “If a group of 50 kids are graduating, and family members show up, are they congregating in the parking lot after getting their diploma? Who has the liability if someone gets sick? Does that ultimately come back to us?”

“Unless the health department releases us (from restrictions) and gives us the OK, I think the liability is going to go sky high,” Sylvia said.

Azevedo said there is “no guarantee” the district could do a drive-in graduation — they are just pondering options at the moment.

“We’re just looking for permission to see if we can address some of those safety issues,” Azevedo said. “You’re right. We would need to dig through all of those things in advance, if we were to go that direction.”

Bacus said he simply couldn’t see a drive-in graduation being a viable option.

“Option three, in my opinion, is a non-starter. I can’t see any scenario where that is safe for children,” Bacus said. “Number three doesn’t work for me.”

Board member Wayne Forsythe said he didn’t want to rule out a drive-in graduation quite yet.

“I would like to give staff opportunities to come up with solutions to some of the challenges we might have,” Forsythe said. “I think it can be managed. Folks will know they’ve got to be on their best behavior. And there is space there. There is space that we could space cars out, and space kids out. But I think we need to give staff the opportunity to see if they can meet those challenges.”

With that said, there are only a few weeks until the 2019-20 school year is officially closed. A decision regarding graduation needs to be made soon, and the school officials know that.

“Time is running out. We need to get on this and make a decision,” said board member Judy Eppler.

“With about a month left of school, it’s about time to make a decision here,” Aranguena added. “We’re not far behind. There are a lot of places still trying to make that decision, as well.”

“It cannot be a last minute decision,” Azevedo told the board.

In the end, the board agreed to try to finalize its decision this week, likely at a specially called board meeting on Thursday of this week.