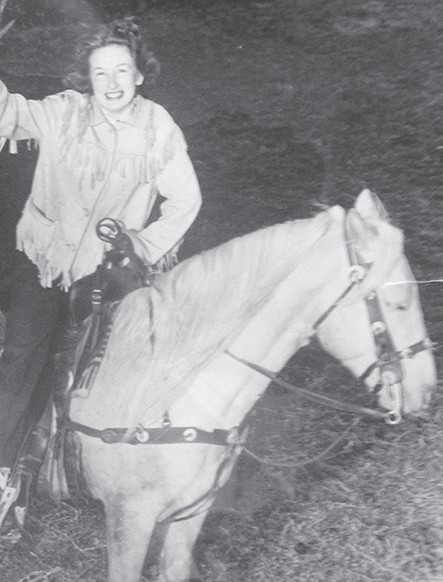 Gloria “Gee” McKee (née Byrd) was born in Hillsborough, Ohio on Jan. 11, 1928 and grew up in both Dayton, Ohio, where she attended the University of Dayton, and Shell, Wyo.

Her father, Herbert Wallace Byrd, was a theater owner which began her lifelong love of show business. Herb was a descendant of the first acting governor of Ohio’s Northwest Territory.

Her mother, Helena Elizabeth Byrd (née Lindsey) was the daughter of J. Glen Lindsey and Adaline Hahn Hoover, a descendant of President Herbert Hoover and the group of pioneers who played an important role in the settlement of Montgomery and Miami counties (Ohio) in 1802.

One of Gee’s legacies was caring deeply for others, not only in the healthcare field in Dayton until her retirement in Beverly Hills, Calif., but for her many friends on the Monterey Peninsula, Wickenburg, Ariz. and Mariposa.

She treasured all animals, especially her beloved Dandie Dinmont and Scottish terriers.

Gee’s intelligence, fervent love of music and youthful spirit carried her throughout her journey on this earth until she passed away peacefully on Sept. 15, 2020, in Oakhurst, Calif.

She is survived by Janie and Rob Kent and Sarah Windsor. Her love and encouragement for all three never wavered. Her second husband, James R. McKee, died in 2013 and first husband, James B. Leist, in 1997.

“Though the radiance which was once so bright be now forever taken from my sight. Though nothing can bring back the hour of splendor in the grass, of glory in the flower. We will grieve not, rather find strength in what remains behind.”

—The Show Must Go On!

A special note of appreciation to the Oakhurst Health Center for their kind, compassionate care extended to Gee in her final years.

We Love You, Mother.