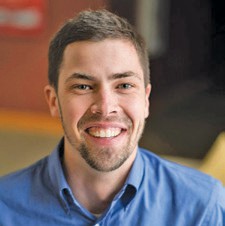 As you probably saw in a previous edition of the Gazette, a massive group from Mariposa traveled to Patterson to compete in a Spartan event on Feb. 16.

It’s been over a month now since that event and it’s given me some time to think about the impact it had locally — and on myself.

Spartan races have become massively popular around the United States. These races take place over several miles, with obstacles all along the route.

Some of the obstacles include climbing walls, monkey bars, sandbag carries, crawls under barbed wire and much more.

A few months prior to the event, my good friend Jenni Kiser (owner of Mountain Fitness), who is always urging me to take better care of myself, told me she was going to sign me up for the Spartan as a birthday gift.

“What kind of gift is that?” I thought to myself when she told me. “That sounds more like torture.”

Nonetheless, I agreed, knowing there was no way of talking Jenni out of her nice gesture.

I figured I would put it out of my mind and worry about it in the days leading up to the race. I knew I wasn’t going to train for it.

So I went on with my life.

As the event got closer, I started to dread it. I told my wife I really had no desire to do it, especially on my birthday, when I could be sitting on the beach.

I didn’t want to let Jenni down, so the morning of the event, I woke up, put together my backpack with things I would need, and made the drive to Patterson with my wife.

When we got there, I was blown away. This was a full-scale carnival, with tents and trailers everywhere. The place was packed with people.

We finally found the tent where the Mariposa group was hunkered down in.

It was cool because the group mainly consisted of employees from John C. Fremont Hospital, and members of Mountain Fitness. In fact, Mariposa received recognition at the event for having the largest team overall.

For about two hours, we mingled with community members and friends, as the butterflies started to swirl around in my stomach.

My wife helped me get prepped and warmed up for the race.

Soon enough, the race was underway.

It was a rude awakening early on as I had to traverse a ditch filled with muddy water. My shoes would be wet for the rest of the day.

I got my out of shape body through many of the obstacles, but needed help from teammates to complete some of the others. I’m terrible at climbing, and I knew that going into the event, so sure enough, that was troublesome for me.

But I was pleasantly surprised at the spirit of teamwork, encouragement and helpfulness at the event. I figured it would just be a bunch of macho people proving how strong they are.

But really, most of the people there just want to see their fellow competitors complete the event.

Eventually, I crossed the finish line, but not after a bout with the “slip wall,” a slanted, metal wall that competitors have to climb up and over. Needless to say, I got a few nasty bruises from slipping around on that stupid wall.

In the end, the sense of accomplishment outweighed the worry or fear I had at the start of the event. It was awesome doing it next to people I knew, people who wanted to see me succeed.

After the race, we drove down to San Francisco, and I spent the rest of my birthday weekend on the beach. What could be better?

As for my friend, Jenni Kiser, she is a uniter. She has the unique ability to make people believe in themselves and to bring people together.

As long as you are of relatively good condition and health, I would encourage you to complete a Spartan. You can go at your own pace, and can receive help if you need it.

If you have questions about it, I would tell you to contact Kiser at Mountain Fitness. She’ll be happy to talk you through all the details.

But she probably won’t pay your entry fee. She only does that for her friends on their birthdays, to torture them.

Just kidding, Jenni. Nothing but love!

Matt Johnson is assistant editor of the Gazette and can be reached at matt@mariposagazette.com.