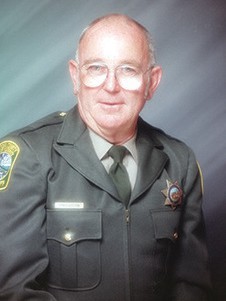 Fred was a family Citrus rancher. In 1959 he began his career in law enforcement with the Ojai Valley Police Department, rising to the rank of sergeant. After a short stint of sapphire mining in Montana, he formed his over-the-road trucking business from both Montana and California.

In 1989, he returned to law enforcement, working for the Mariposa County Sheriff’s Office until he retired in 2002. Fred was a Master Mason and a Past Master of Hornitos Lodge 98, where he was awarded the prestigious Hiram Award. He also was a member of the Mariposa Lions Club and earned recognition as Lion of the Year. Fred was also a member of the Catheys Valley Garden Club and was recognized by them for his outstanding contributions. He was a member of the St. Nicholas Anglican Church in Atwater, Calif. Prior to that he attended St. Luke’s Episcopal Church where he served on the church council.

He is survived by his daughters, Roberta (Kurtis) Dutton Lowe and Cynthia (William) Dutton Fields. Also surviving Fred are his grandchildren, Kristina, Thomas and Jennifer, along with his great grandchildren, Maverick, Mason, Logan, Penelope and Olivia.

There will be a graveside service held for Fred on Monday, May 31, 2021, at 11 a.m. at the Catheys Valley Cemetery in Catheys Valley.

One response to “Fred Dutton”