Cody Truchsess was usually the high point scorer for Mariposa this season. Against Le Grand he erupted for 43. Photos by Matt Johnson

Four members of the Mariposa County High School varsity boys basketball team were named to the 2019-20 All-League ranks, as voted on by coaches in the league.

The 6-foot-2 guard Arebalo was one of the most spectacular players on the team this year, throwing down a few thunderous dunks and pumping in the occasional three-pointer. But aside from his highlight plays, head coach Pierce Chaney was more impressed with the growth Arebalo displayed as a leader.

“The thing that impressed me the most about Carson is that he improved a lot in becoming a leader. It was slow at first but near the end of the year I started to see him pick people up, be a good leader and it was amazing to see him take on that role and be able to accomplish it,” said Chaney. “Skill-wise, he has been able to do the same stuff all along, so I think the main thing was his mentality changing from day one to the end of the season.” 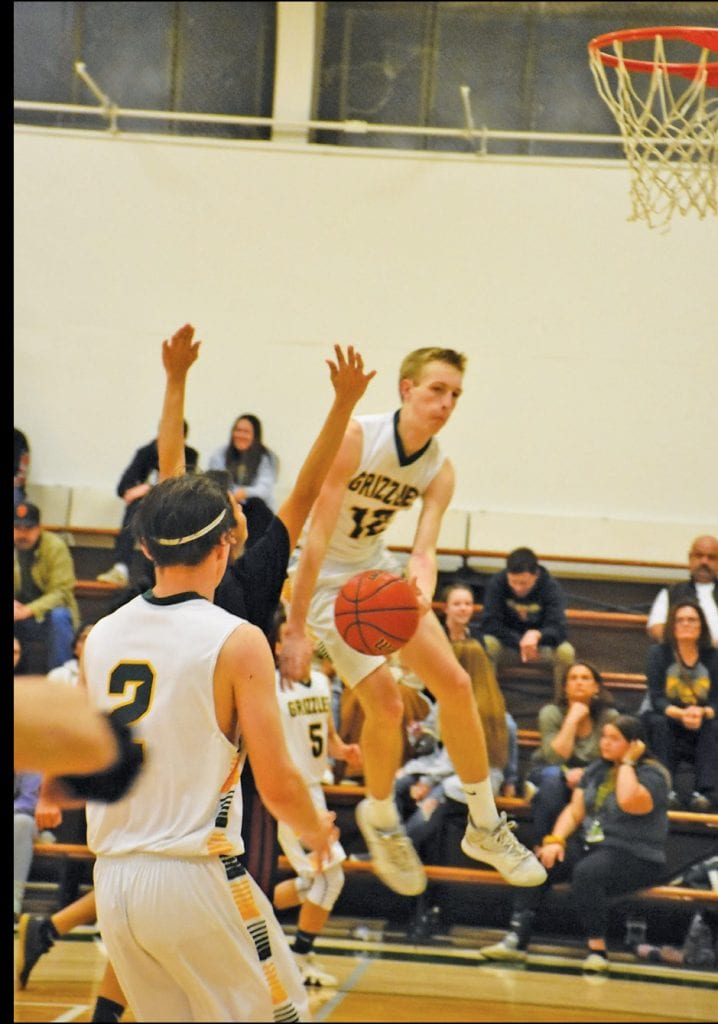 Senior Carson Arebalo was instrumental in “setting the table” for the MCHS offense, so to speak.

Truchsess, a 5-foot-11 senior guard, had the ability to slash through the defense for easy layups. He was relentless in his attacks.

“What impressed me the most was that in the off-season, he played a lot. He really wanted to improve to be one of the guys who could contribute a lot. I’m proud of him for achieving that,” said Chaney. “He has a great personality. Sometimes it would be too much (aggressiveness) on the floor, but he always played really hard in every single game.”

Isaiah Lura-Holmes was one of the few post players on the roster. The 6-foot-4, 230 pound junior became a handful for defenses to deal with, especially as the year wore on.

“I think he was the most improved defensively and offensively from the beginning of the season to the end of the season. Against Le Grand on the road, he scored 19 points in the first half,” said Chaney. “He’s a fun guy to be around and made the team better.” 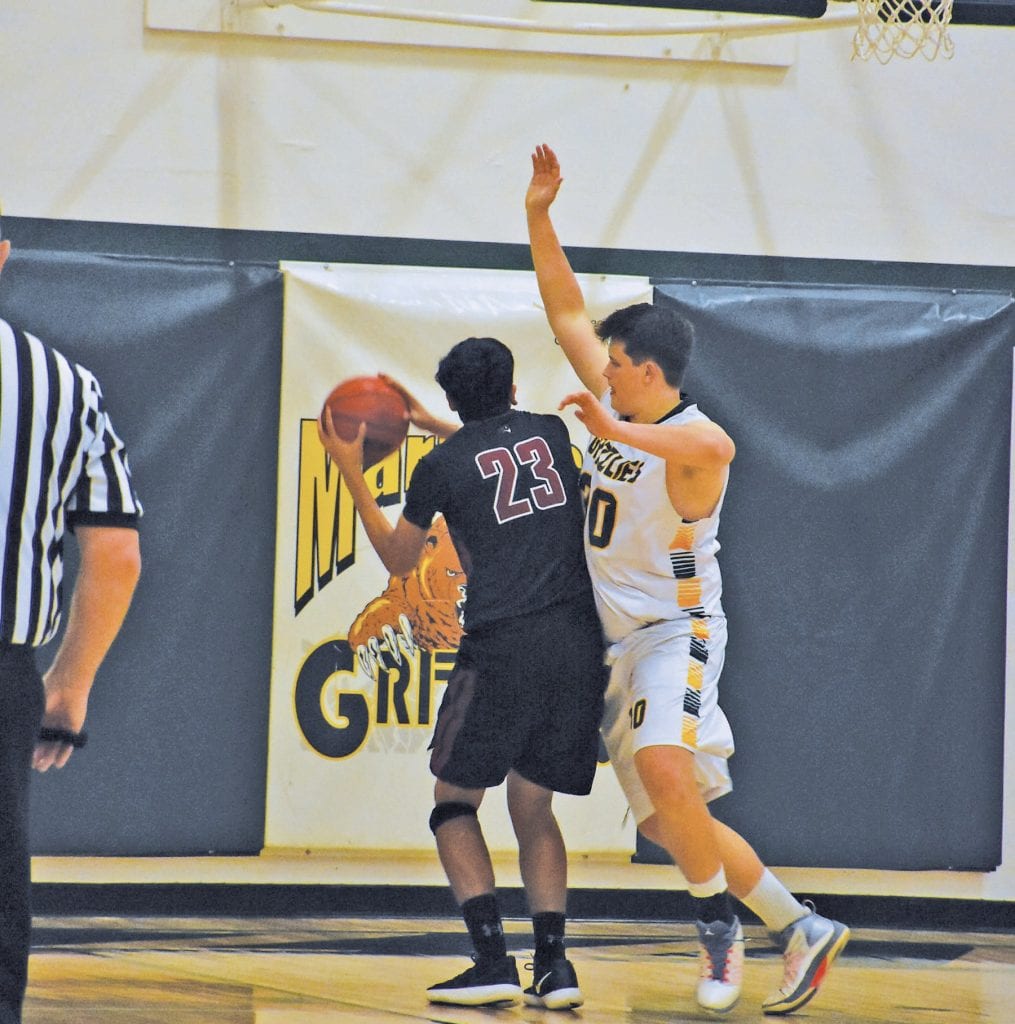 Isaiah Lura-Holmes (right) was a vital piece to the MCHS boys hoops team due to his size, rebounding, and improved play overall.

Hill-Zeck, a 6-foot-1 freshman point guard, adjusted to the varsity level, but it took some time. Even when he struggled, however, he could usually be counted on to turn in a few acrobatic, athletic plays each game.

“He was able to turn it on the last three games of the season and didn’t seem to be nervous anymore, which is a good sign moving into next year. In our game against Gustine, I think he combined to score the last 15 or 20 points. It was a close game, so they were big baskets,” Chaney said. “One thing he is underrated in is his defense. He is probably the most disciplined and best perimeter defender we had on the team, as far as technique, moving your feet, stopping someone and keeping them in front of you. He did a good job in that department.”

Mariposa finished the season 15-13 overall, and 8-4 in league contests, good for third in the league. 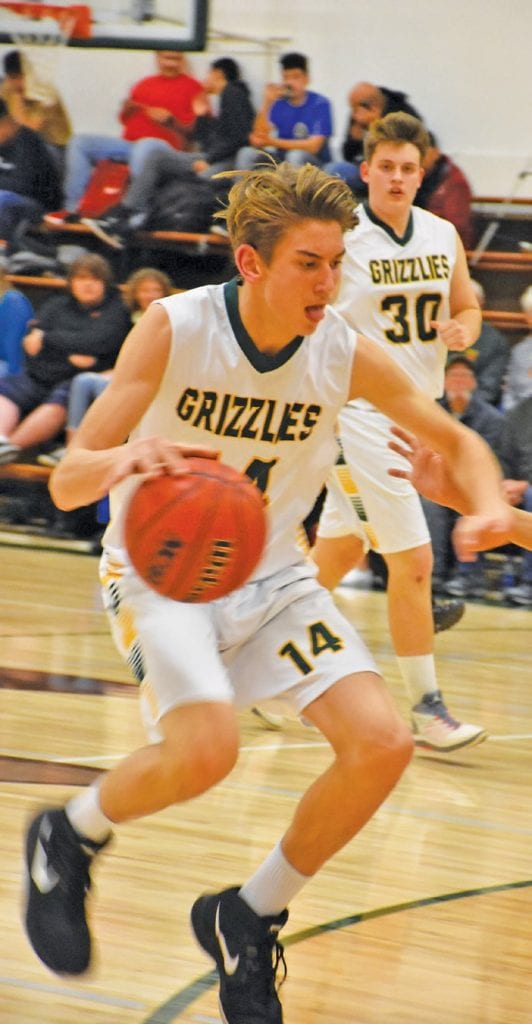 Johann Hill-Zeck showed enough flashes of brilliance in his freshman season to attract the eyes of league coaches. Photos by Matt Johnson