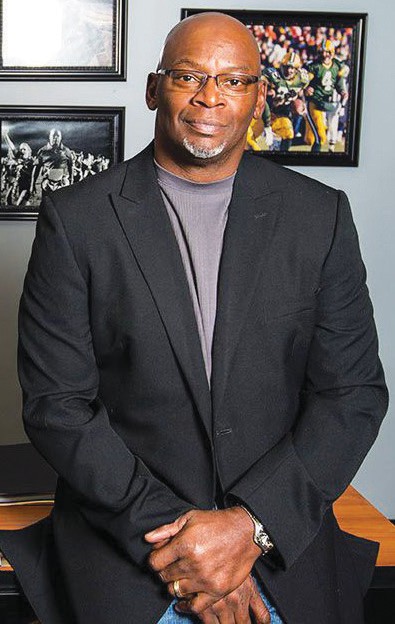 Harry Sydney built quite the career in professional football.

Sydney, 60, is a former National Football League running back.

He played six seasons in the NFL for the San Francisco 49ers and Green Bay Packers after a few years in the United States Football League.

But all of those accomplishments on the football field pale in comparison to the work he is doing now to improve the lives of males of all ages.

Following his career in football, he remained in Green Bay, Wisc., and he now oversees a nonprofit male mentoring program known as “My Brother’s Keeper.”

“I looked around Green Bay and thought there was an epidemic going on. The epidemic was that boys and men were being lost,” said Sydney.

Sydney founded the organization in 2003 with a mission to provide “straight talk and sound direction” to individuals who lack necessary life-coping skills.

“We help them change their thought processes by helping them think differently,” said Sydney.

All persons are welcome regardless of race, creed, color or ethnic background. Participants range from troubled boys identified by schools, courts and parents, to men struggling with relationships, job dissatisfaction, financial difficulty and defining and achieving realistic goals.

Since its inception, over 9,300 boys and men have been helped.

Sydney said he forces clients “to have the conversation to stop them from blaming everyone else.”

“We’ve all got stuff. But it’s how we handle that stuff,” Sydney said. “You can’t put your stuff on somebody else.”

He said the main goal is to teach those who take part to be “men of integrity” and to do “be willing” to do the right thing “at all times.”

In his own biography, “Win from Within: False Starts, First Downs, and the Power of Second Chances,” Sydney detailed his rough upbringing, which is an upbringing that he says has helped him reach the point where he has credibility with the males he works with.

“I grew up in the south and my dad was a military man. He was abusive,” Sydney said. “You’d be scared to come home. … There are a lot of things I can touch on.”

For more information or to donate to the organization, visit www.mybrotherskeeperinc.net or follow Sydney on Twitter at @HarrySydney24.

Sydney’s football story is a unique one.

“I made it to the NFL at age 27. That’s not something that happens,” Sydney said. “When I was 6 years old, my mom and dad asked me what I wanted to be. I drew a picture of myself as a football player. That’s all I ever wanted to be.”

Sydney explained that he used the game to put himself in a better position in life.

“When you step on a football field and people recognized who you were, that was my world. That had to be my world because I knew that was the only way out.”

He also shared several memories of his time in pro football.

• He fondly recalled being selected by teammates to call the coin toss in one Super Bowl he played in.

• He shared thoughts on legendary head coach Bill Walsh and his generosity.

“I remember Bill Walsh in my first year in San Francisco. We had our exit interview, so we talked. He said I had a good season. He asked if there was anything I wanted to say. … I said, ‘Bill, I’m not complaining about contracts. I love it here. If this doesn’t go anywhere, no big deal. But if you can think of some kind of raise, (that would be good).’ The first day of training camp I’m stretching, and Bill comes over to me and asks if I remember what we talked about. He told me they had a new contract for me and to go in and sign it.”

• When asked whether he feels the 49ers and Packers are headed in the right direction heading into the 2019- 20 season, he felt both were.

• One coaching memory was the 1999 NFC Wildcard game between the 49ers and Packers. Sydney was coaching for the Packers at that time and suffered a 30- 27 loss to the 49ers in the waning seconds when wide receiver Terrell Owens caught a miraculous touchdown.

“They never should have let TO get in the endzone,” Sydney said of Packer defenders. “At the same time there is 49ers love in my blood.”

When asked which team he roots for when the 49ers and Packers square off, he didn’t choose either one.