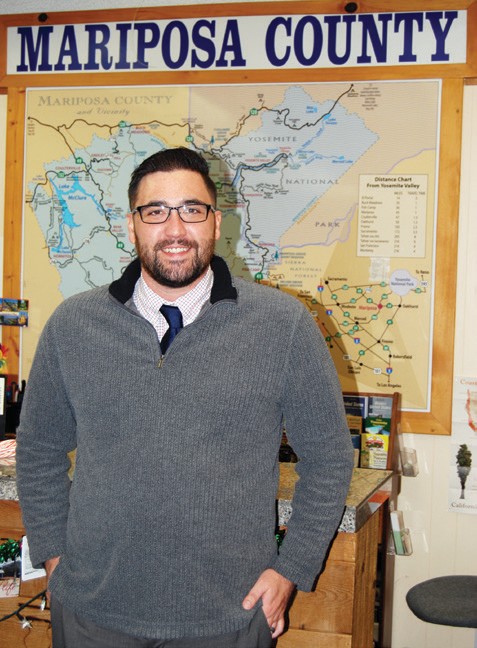 Scott Fiester is shown at the Mariposa County Chamber of Commerce. He is the new executive director of the chamber and began his duties this week. Photo by Greg Little

And now, the name will continue in a new form.

Scott Fiester is the new executive director of the Mariposa County Chamber of Commerce.

The announcement was made last Friday morning during the monthly Friday Coffee event of Main Street Mariposa, which was held at the chamber office.

“We wanted to come back to Mariposa,” said Fiester.

How to get back to California, however, was another story.

Fiester is a 2006 graduate of Mariposa County High School. He is the son of Richard “Rod” Fiester and Kristen Fiester. Both are fixtures in Mariposa County.

His father was the music director at MCHS for 30 years, as was his grandfather. His mother is the director of Mountain Crisis Services.

After he graduated from MCHS, Fiester enlisted in the U.S. Army. He was a human intelligence collector and did tours of duty in both Afghanistan and Iraq. He worked with Special Forces to gather intelligence on the ground. Fiester spent eight years in the military.

Though he wanted to come back to California immediately, that was not in the cards. Instead, he enrolled in the University of Arizona where he earned a degree in business administration with an emphasis in information systems.

With a degree in hand, he took a job with Intuit, the company which operates QuickBooks and TurboTax. He worked at Intuit in Tuscon in the customer experience lab.

Basically, he said that lab was focused on “ways to streamline” processes for small businesses — something he hopes to apply as head of the local chamber.

Even having a good position at Intuit, Fiester said he still “wanted to get back to California.”

One reason, he said, was the family wanted to raise their children “with their grandparents,” something he experienced in his childhood.

“I didn’t think Mariposa was an option,” said Fiester.

But then he reconnected with one of his best friends from high school. That friend is Nate Pyle, co-owner of The Grove House, a local pub started by Pyle and his wife, Rosalyn. The Pyles, too, were living in Arizona but wanted to find a way back to Mariposa. They did it by starting their own business.

Fiester said it was Pyle who introduced him to his future wife.

The two have kept in touch and it was a few months back when his old friend told him about the job opening as executive director of the chamber.

“I never thought it was possible,” said Fiester. “I thought the only way I could get back here was to start my own business.”

But he submitted his resume and the board of directors began paring down their choices. They got it down to four and Fiester was one of them.

He went through the interview process with all 16 members of the chamber board of directors.

During Friday morning’s meeting, chamber officials said they had a long meeting in making the final decision, but in the end decided upon Fiester for a variety of reasons.

He couldn’t have been happier.

“I gave up a lot at Intuit,” said Fiester, “but there really wasn’t a choice. This was what we wanted.”

As the new executive director, Fiester will officially begin his duties with the chamber this week, though he has moved to Mariposa and was in the office last week getting a feel for the position and meeting with the staff.

Though he’s still in the early stages of setting goals, one thing is clear for Fiester and that is he wants to focus on helping small businesses — a vital function for the local chamber.

“I can support small businesses in this capacity,” he said.

Fiester said running a small business “is a risk,” and he wants to help local business owners manage those risks. He learned a lot about that a Intuit and said he wants to apply that knowledge locally.

“I want to help small business streamline, knowing the chamber has their back,” said Fiester.

Collaboration, too, is important to Fiester.

“We are all focusing on the same thing,” he said. “Mariposa is a great place for people to come. Not just Yosemite, but Mariposa County.”

That goal is shared by many local groups and organizations and Fiester hopes the chamber can play a major role in getting those groups on the same page and working in harmony.

He’s also going to focus on working within the community, whether as the chamber director or as just a member of the community. It’s something he is passionate about.

“I want to be an active community member,” said Fiester.

Though it’s been a whirlwind few months, now the reality of getting the job and going to work is setting in for Fiester, and he couldn’t be more pleased.