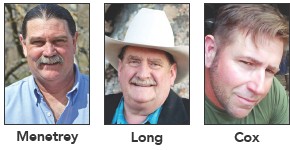 A Mariposa County Supervisor is dealing with the fallout from remarks he made in an email message to a constituent.

District 3 Supervisor Marshall Long, responding to an email from constituent Jerry Cox, wrote the following to Cox in an email on Nov. 1. The email was made public by people close to Cox:

“Tired of your lies and threats. How’s that homelessness working for you?” Long asked in the email.

Long was referring to Cox being unable to live on his property, after it was seized nearly two years ago by the county.

The Cox case has been slow moving and centers around a Mariposa County Superior Court ruling that found Cox, owner of JDC Land Company, in violation of more than 100 building code violations.

Cox has stated his belief that the case stems from county officials attempting to grab his property and push him out of the county.

Long confirmed to the Gazette he did send the email, but added that he sent it to the email account of Marcello Ramirez, whom he believes is actually Cox. 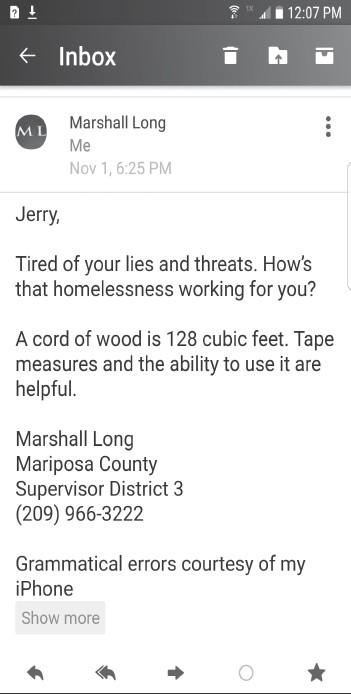 Shown is the email sent by Supervisor Marshall Long which has caused a stir on social media as well as a riff between Long and Supervisor Miles Menetrey.

“I don’t now for sure if it’s an actual person or if it is another one of Mr. Cox’s personalities or names he uses,” Long said. “I had gotten tired of being threatened and lied to, and I made a smart-a** remark back to him.”

Long said he has been receiving emails containing “veiled threats,” that have threatened lawsuits against him.

Long called his own reply a “knee-jerk reaction” and said that “maybe it wasn’t in good taste,” but added, “I won’t apologize for my statement for Mr. Cox. I will accept responsibility for it.”

“I’m an elected county official, but I also am a human being,” Long added. “I know my email is public record. I didn’t share Mr. Ramirez’s snotty remarks on Facebook. I would have appreciated the same consideration.”

Long laid the blame for Cox’s current situation at the feet of Cox.

“When you get down to it, everything that is happening to Mr. Cox has been brought on to himself,” Long said. “I’m astounded that we (the county) continue to have to spend funds on Mr. Cox. I’ve had to block a lot of folks on Facebook because of the harassment they have for me, like I’m the problem. I didn’t create these problems. These problems were in existence with Mr. Cox long before I was elected.”

Long stressed that with Cox’s case currently in the court system, “the county board of supervisors has nothing to do with” the decision.

“They (Cox’s supporters) continue to attack me like I can have any influence about what’s going on now. I can’t because it’s in the courts,” Long said. “This is in receivership and it’s up to the courts to decide what happens with the code compliance issues on that property. If Mr. Cox would comply by the rules like everyone else, he’d be fine. He can go home and do whatever he wants with his property as long as it falls under the laws, rules and regulations of California and Mariposa County.”

Long even went as far as saying that an associate of Cox lied to get onto Long’s ranch, telling Long he was going out to search for mushrooms for his wife.

“Instead of looking for mushrooms, he saw some tires and spilled oil (considered hazardous waste) and drove off,” Long said. “Then there was a complaint filed against me. We cleaned it up, took it to the landfill and paid the price.”

“The point was that even though it was done (discovered) in an underhanded way, we did violate,” Long said. “But the big thing is we complied with the rules and made it right. … That is the difference between Mr. Cox and myself. We did what Mr. Cox should have done, and that is comply with the law, and not thumb our nose at Mariposa County, as he has done.”

Long’s email drew the ire of fellow Supervisor Miles Menetrey, who blasted Long’s actions at a supervisor meeting on Nov. 13.

“It is with the utmost displeasure that I read this statement,” Menetrey said. “Last week an email, apparently authored by Supervisor Long, was published on several Facebook pages. The email included a personal attack on Jerry Cox, who is currently engaged in litigation with Mariposa County. To my knowledge, the email has not been denied, nor has an apology been given. I want to let the community know I do not condone or in any way support or share the sentiment communicated in the email. I believe, and training supports the idea, that as an elected representative, this board should hold itself to a higher degree of ethical standards. As a fellow member on this Mariposa County Board of Supervisors, I was completely embarrassed by the email, and I fully support any and all punitive actions this board may be able to impose on Supervisor Long.”

Long did not respond following Menetrey’s remarks at the meeting.

However, he did tell the Gazette following Menetrey’s remarks that “apparently supervisor Menetrey has decided to drink the poison.

When made aware of Long’s comments, Menetrey had his own response.

“My statement says it all. We’re held to a higher standard, and we should be supervisors for all the people, whether we like them or don’t like them. We should be there to represent everybody,” Menetrey said. “They’re our constituents. To call people out like that — we’re trained to hold ourselves. We have ethics training, for crying out loud, that speaks to this. Either he’s sleeping through this or doesn’t care. I’m really disappointed to hear him take that position of I am dirty politics. That’s a shocker.”

For his part, Cox said he believes Long’s message is a reflection on the county government as a whole.

“Perhaps Marshall’s reactions are abrasive treatment toward me because he’s never sat down and talked to me,” said Cox, saying his property is in Long’s district. “I believe Mariposa County is rumor-driven and his attitude toward me being homeless is a result from defamation of character that was widely publicized during the fake rape case.”

He added: “I believe Marshall Long and other county officials want me to be removed from this county even though I am innocent on all counts. At first they tried to get rid of me by throwing me in prison for life, which didn’t work, and now they are trying to unethically steal my home on phony code violations and receivership schemes.”

He continued: “In America, this can only happen with abusive powers from a corrupt local government. Those county officials who conspired against me, such as Marshall Long, will have a lot to learn. Marshall Long makes fun of certain people being homeless because he thinks he can get away with it. Who are we as human beings if we ignore the suffering of others? Politicians?”

Cox, who is set to appear in court at 2 p.m. Monday for another hearing in his receivership case, said if it wasn’t for friends, his life would be even worse.

“Thankfully, I have lots of friends who offer a couch every now and again, but I do also sleep in my truck,” said Cox.

Long said Cox never approached him to ask for any sort of help when the case first opened.

“Mr. Cox never once asked me for help … where I could have sat down with him,” Long said. “I would have had to tell him, ‘I suggest you get good legal counsel.’ That’s the only advice I could have given him.”

It is unclear if any sort of action will be taken against Long at this time.